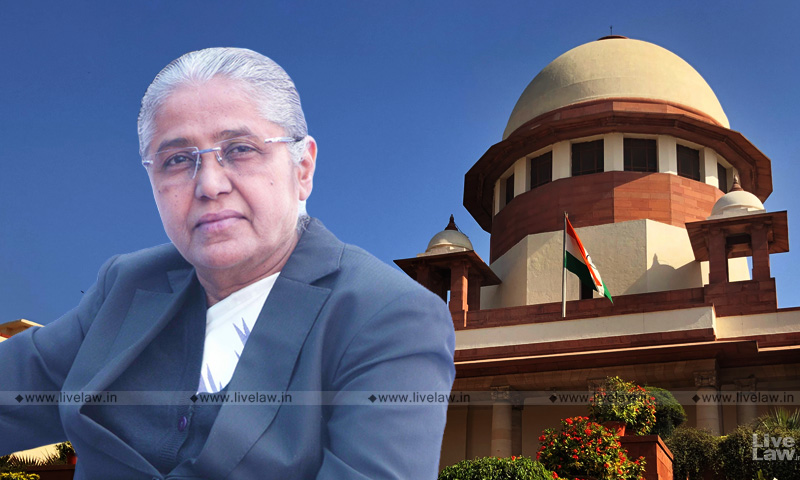 Justice R. Banumathi, the fifth senior most judge of the apex Court, had her last working day on Friday, July 17.Her official date of retirement is coming on 19th of July (that is Sunday, a Court holiday). Justice Banumathi was elevated to the Supreme Court in the year of 2014 and was part of several land mark decisions. For nearly 42 months starting October 2014, Justice R Banumathi...

Justice R. Banumathi, the fifth senior most judge of the apex Court, had her last working day on Friday, July 17.

Her official date of retirement is coming on 19th of July (that is Sunday, a Court holiday). Justice Banumathi was elevated to the Supreme Court in the year of 2014 and was part of several land mark decisions. For nearly 42 months starting October 2014, Justice R Banumathi remained the lone woman judge in the SC.

In view of the COVID-19 situation, the Supreme Court Bar Association arranged a 'virtual farewell' to Justice Banumathi, with the judges and advocates attending via video conferencing.

Brief portrayal of the profile

Justice Banumathi, who was born in 1955 got enrolled as an advocate in the year of 1981. During her tenure as an Advocate, she practiced law before the Mofussil Courts at Tirupattur and Krishnagiri Districts along with Harur town of Dharmapuri district of the State of Tamil Nadu. Justice Banumathi had entered in to the Tamilnadu Higher Judicial Service as a direct recruit District Judge in the year of 1988 and served as a District and Sessions judge around various districts of the State of Tamil Nadu.

Her elevation to the High Court of Madras was in the year of 2003 and later sworn as the chief Justice of Jharkhand High Court in 2013 and later elevated to the Supreme Court on 13-08-2014.

She was also a member of Board of Governors and as President of Board of governors in State Judicial Academy her role in actuating methodological training for judicial officers had won praise from all quarters. She has also authored a book titled,"Hand Book of Civil and Criminal Courts Management and Use of Computers".

Executive Chairman, Tamilnadu State Legal Services and Chairman, Madras High Court legal services committee are some among the other key positions she held.

Entry to the Collegium.

Following the retirement of Justice Ranjan Gogoi, Justice Banumathi got entry to the SC Collegium in November 2019.

Justice Ruma Pal was the first woman to make it to the Collegium. After the retirement of Justice Pal during 2006, it took more than a decade for a woman judge to be part of the collegium.

In Modern Dental College & Ors v. State of Madhya pradhesh 2016 (7) SCC 353, Justice Banumathi through her judgment had voiced a concurrent opinion which establishes the fact that, the state possess an indisputable duty to provide education and the state do have the power to regulate the private institution for the greater aim of providing quality education. She discussed in detail the principles of "doctrine of proportionality" with respect to reasonable restrictions on fundamental rights.

The Bench of Justices R. Banumathi and A.S.Bopanna took Suo Motu Cognisance, when the girl who alleged rape acquisitions against Chinmayananda went missing.

The infamous Chinmayananda case is that, a woman studying LLM at a college in Shajahanpur District, Uttar Pradesh, levelled an allegation that, Chinmayananda had sexually abused her on multiple occasions. The College in which the women studies her course is owned by a management which was under the authority of Chinmayananda. An FIR was also restored against him under Section 376 C of IPC.

The bench in the suo motu proceedings had directed the state of Uttar Pradesh to transfer the Miss "A" (the woman in the Chinmayananda case ) alone with her brother to another college which comes under the same university. Also directed the Bar Council of India to increase the sanctioned strength of the respective colleges to accommodate 'Miss A' and her brother, as an "exceptional case". The University was directed to issue required certificates to ensure that they can resume their studies at the earliest.

The bench also directed the Delhi Police to provide all security measures and accompany Miss "A" and her parents to go to their place of residence at Shajahanpur, Uttar Pradesh.

Justice Banumathi was part of the 9-judge bench in Jindal Stainless Limited and Anr. v. State of Haryana and Others, which upheld by 7:2 majority the constitutional validity of Entry Tax imposed by States on goods coming in from other states. She authored a separate judgment in the case, partially dissenting from the majority on certain aspects.

Justice R Banumathi led the bench which heard the multiple bail applications filed by Senior Advocate and former Union Minister P Chidambaram at various points of time in the cases filed by CBI and Enforcement Directorate in the cases related to INX Media transaction.

The judgment authored by her, while granting bail to him after 106 days of custody, observed that recording of findings based on the sealed cover documents submitted by the prosecution as if the offence has been committed, and using of such findings to deny bail would be against the concept of fair trial.

"It would be against the concept of fair trial if in every case the prosecution presents documents in sealed cover and the findings on the same are recorded as if the offence is committed and the same is treated as having a bearing for denial or grant of bail", the judgment said.

The judgment held that the requirements under Court rules with respect to seeking third party information related to court documents must prevail, regardless of the prescriptions under the RTI Act.

"Under the guise of seeking information under the RTI Act, the process of the court is not to be abused and information not to be misused", the judgment stated.

Dissent in Delhi Jal Board :

The Constitution bench decision of the Supreme Court in Bir Singh v. Delhi Jal Board (was that the rule of Pan India Reservation that prevails in the National Capital Territory of Delhi is very much in agreement with the Constitutional scheme relating to service under the Union and the States/Union Territories.

The major issue of the case was that,"Whether a person belonging to a Scheduled Caste in relation to a particular State would be entitled or not, to the benefits or concessions allowed to Scheduled Caste candidate in the matter of employment, in any other State?"

Dissenting from the majority judgment, she observed.

Justice Banumathi was also part of the bench which decided the 2017 Nirbhaya Judgment, in which the supreme court upheld the Death penalty of convicts in Nirbhaya Rape and Death Case.

The "incident shocks collective conscience of the society", is what she commented on the Nirbhaya Incident. Justice Banumathi wrote a separate but concurring decision.

"In the present case, there is not even a hint of hesitation in my mind with respect to the aggravating circumstances outweighing the mitigating circumstances and I do not find any justification to convert the death sentence imposed by the courts below to 'life imprisonment for the rest of the life'. The gruesome offences were committed with highest viciousness. Human lust was allowed to take such a demonic form. The accused may not be hardened criminals; but the cruel manner in which the gang-rape was committed in the moving bus; iron rods were inserted in the private parts of the victim; and the coldness with which both the victims were thrown naked in cold wintery night of December, shocks the collective conscience of the society. The present case clearly comes within the category of 'rarest of rare case' where the question of any other punishment is 'unquestionably foreclosed'. If at all there is a case warranting award of death sentence, it is the present case. If the dreadfulness displayed by the accused in committing the gang-rape, 427 unnatural sex, insertion of iron rod in the private parts of the victim does not fall in the 'rarest of rare category', then one may wonder what else would fall in that category. On these reasoning recorded by me, I concur with the majority in affirming the death sentence awarded to the accused persons", observed by Justice Banumathi in Nirbhaya Case.

She was also led the bench which decided the various petitions filed by the death row convicts challenging the death warrant and rejection of mercy petitions.

On March 20, few hours before the scheduled execution of the convicts, a bench led by Justice Banumathi held a mid-night hearing to consider the last-minute plea by convict Pawan Kumar against the rejection of mercy petition.

At the end of a dramatic hearing, at about 3.30 AM, the bench dismissed the plea, observing that there were no grounds to interfere with the President's order within the limited powers of judicial review.

In a notable decision which tightened the curbs on conversion of paddy land in Kerala, a division Bench of the Supreme Court comprising of Justice V.Gopala Gowda and Justice Banumathi in The Revenue Divisional Officer v. Jalaja Dileep & Anr ruled that HC has no power to direct authorities to change entries in basis tax register, ignoring the data bank prepared under the Paddy Land Act.

Patent illegality a ground to set aside foreign arbitral award

In a recent notable decision, a bench led by her held that patent illegality was a ground available to set aside foreign arbitral award.

Justice Banumathi was part of the Constitution Bench in Commissioner of Customs (Import), Mumbai vs. M/s. Dilip Kumar and Company, which ruled that exemption notifications should be interpreted strictly and that the burden of proving applicability would be on the assessee to show that his case comes within the parameters of the exemption clause or exemption notification.

In a judgment which attracted widespread debate for adding to the confusion of 'venue-seat' conundrum in arbitration law, Justice Banumathi-led bench held that only the High Court which has jurisdiction over the 'venue' can entertain the petition seeking appointment of Arbitrator.  In this case, Brahmani River Pellets Limited vs. Kamachi Industries Limited, the bench overturned the finding of the High Court that Courts at both the 'seat' and 'venue' of the arbitration will have concurrent jurisdiction.

As a judge of the Madras High Court, Justice Banumathi had pronounced a bold decision in K.Muniasamyathevar v. Dy.Superintendent of Police and Others dated 29 March ,2006, banning all types of Jallikattu,Rekla Race (Bullock Cart Race); Oxen Race or any other entertainment involving causing cruelty to animals in the State of Tamil Nadu.

Apart from the above, Justice Banumathi authored numerous judgments which explained and reiterated the first principles relating to the grant of bail, specific performance, recording of evidence, criminal trial, Section 138 NI Act etc

The fate of the Sabarimala Reference ?

It was on September 28,2018 ,the Supreme Court delivered the original judgment in the Sabarimala case.On November 14, 2019, a five judge bench headed by the then CJI Ranjan Gogoi had passed an order of reference in the review petitions, considering the need to clear certain questions of 'essential religious practices'.

A new nine-judge bench was constituted to consider the question of law in the Sabarimala review matter. Justice Banumathi was the lone woman judge in the bench.

Though the 9-judge bench had framed the issues and commenced hearing in the second week of February, the onset of COVID-19 and the subsequent lockdown disrupted the hearings.

CJI Bobde had plans to fast track the hearing, and used to adjourn several matters by saying 'after Sabarimala reference'.

With the retirement of Justice Banumathi, the 9-judge bench will have to be re-constituted.