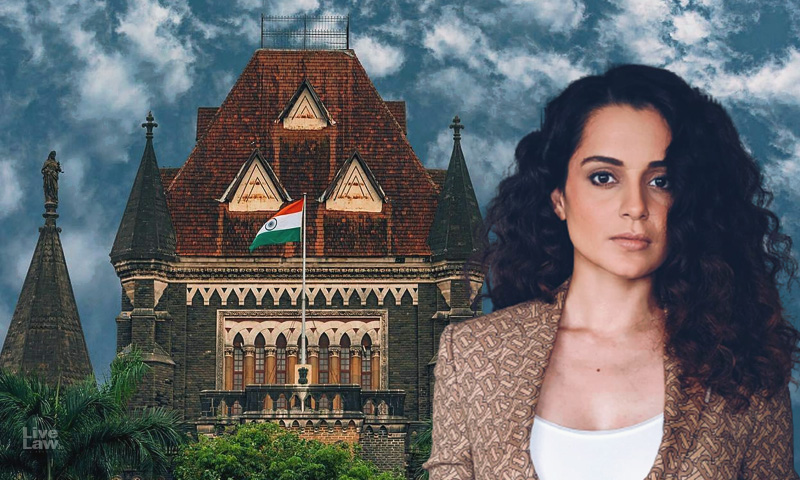 The Bombay High Court while hearing actor Kangana Ranaut's writ petition against the Municipal Corporation's demolition of her bungalow turned office at Pali Hill, Bandra questioned as to how the ground floor was demolished even though there were no alterations made on the ground floor as per the inspection report of the BMC. It was one of the many questions that came up during the...

The Bombay High Court while hearing actor Kangana Ranaut's writ petition against the Municipal Corporation's demolition of her bungalow turned office at Pali Hill, Bandra questioned as to how the ground floor was demolished even though there were no alterations made on the ground floor as per the inspection report of the BMC. It was one of the many questions that came up during the elaborate hearing that was scheduled at 3 pm.

A division bench of Justice SJ Kathawalla and Justice RI Chagla heard Kangana's counsel Senior Advocate Dr.Birendra Saraf today at length. At the outset, BMC's counsel Senior Advocate Aspi Chinoy submitted that in view of the allegations and counter-allegations in the matter on facts, the matter should not be considered as a writ petition. The bench responded saying the submission will be considered.

Dr.Birendra Saraf referred to the fresh surrejoinder submitted by the Municipal Corporation in response to the petitioner's rejoinder and said he will respond to it.

"This is a case where all laws and provisions have been thrown out. Material produced by the Corporation and photographs submitted, have, far from establishing the case, demolished their own case. With every affidavit they have tried to improve their case.

This is a mala fide action against me as I have a difference of opinion and ideology with those in power having authority. The timing of the action taken by the Corporation supports my case and clearly shows that there is malice in fact and law on part of MCGM authorities" Saraf said.

In May 2019, Kangana sent a letter to the BMC enclosing the letter of the consultant certifying the building fit for inhabitation after structural repairs. She was later granted permission for renovation works. At every stage, she proceeded with necessary permissions, after consultations with experts, Dr.Saraf contended on behalf of Kangana.

"Thereafter, renovation was completed in January 2020 and a 'Puja ceremony' was held after renovation, which received wide media publicity. The newly renovated bungalow was also featured in an architecture magazine in April 2020."

"The petitioner is at loggerheads with the Maharashtra Government over some issues. She has displeased a party in power with her open views. She had to face life threats and had to seek special protection from the Centre. Sanjay Raut has made derogatory statements against Kangana in TV channels. He said that Kangana needs to be taught a lesson. On the same day when Raut made remarks, an officer (a mukadam) from the BMC visited and entered the property without prior notice. The timing of the visit assumes relevance.

As per the mukadam's report, he just saw the gate (of the demolished property) open and just walked in. Thereafter, on September 7, officials from MCGM visited the property around noon. They took some measurements and made handwritten notes. They also roughed up the security guards and others working at the bungalow and even threatened them.

Then, on September 8, a notice was issued by the MCGM seeking for documents, etc regarding alterations carried out at the property. At the first opportunity my client got, she has denied all allegations made by the Corporation and categorically stated that no work was going on at the property."

Once again referring to the Corporation's claim in their affidavit in reply filed in response to the unamended petition on September 10, Dr.Saraf said that the Mukadam in the course of "routine inspection of the said area", apparently saw some construction activity was going on at the property in question. He also noticed gunny bags kept outside. Since the gate was open, he went inside.

On the same day, i.e. September 5, he prepared a detection report. Now the Corporation had annexed all kinds of documents to respond to the petitioner's averments but not the detection report, Dr.Saraf questioned.

Thereafter, the first inspection report of the premises was prepared after the Designated Officer inspected the said property.

"We will have to examine whether the demolished portions said to be "unauthorized construction" was ongoing work or work done in the past" Justice Kathawalla remarked.

"There is no ongoing work on the ground floor. Even according to the Corporation, except for the entrance gate, nothing was changed. Then how was the ground floor demolished?", Justice Kathawalla asked.

"Exactly your lordship, I bow to your Lordships!", Dr.Saraf said.

Even if it was unauthorized construction, it could not have been demolished under Section 354A, Justice Kathawalla further noted.

"Has the Corporation demolished any portion which was existing as of January 2020? We want your assistance on that", the bench told Dr.Saraf.

Referring to the inspection report prepared on the demolished site, Dr.Saraf pointed out that the Corporation has alleged that a toilet has been converted into an office and alterations have been made in the kitchen. How do they know that these structures did not exist before? The first hand written note does not mention any of this, Dr.Saraf questioned.

'When the statute confers drastic powers, it requires great responsibility. BMC has not prepared any panchnama recording that any equipment or tools for work were found on the property. There is no consistency in the stands taken by the BMC.

Had I been given a fair opportunity, I would have taken advise from experts and would have removed things myself, if they were unauthorized. There is no disputed question of fact. Every document of theirs establishes the fact that the demolition was unauthorized" Saraf argued.

Court asked the corporation whether photographs of the site were taken by the BMC's officer. This was after Saraf told the Court that the photographs have no date imprinted on them and the date of September 5 is handwritten over them.  Aspi Chinoy confirmed from the said officer that he took the photos from his mobile. The bench asked him to deposit his phone with the Court so that it can be verified that photographs were taken from his phone.

Finally, referring to photographs of people annexed to BMC's reply who are allegedly workers present at the petitioner's property, Saraf said-

"These are just random people standing around and the Corporation has just taken their pictures and purported to show them as workers. One of them is a cleaner who works at the building and Corporation has annexed a picture of him talking over the phone."

So they were demolishing and taking pictures also, Justice Kathawalla asked.

Photographs are always taken as a matter of practice, Aspi Chinoy told the Court.

Saraf referred to the BMC circular and said:

1. There should be an entry in the detection register on the same day when an unauthorized construction is detected.

2. They have to get photographs of the site.

3. Panchnama to be prepared of the materials, machinery etc.

He contended that all these procedures were thrown out of the wind in the instant case.

"There is non-compliance of the circular. There is no sketch, no photographs, no entry in the detection register", he submitted.

At this point, Justice Kathawalla asked Sr Advocate Chinoy about some other entries in the detection register and questioned whether demolition was carried out with respect to them. Chinoy said he will respond on the specific point in the next hearing.

'We want to know if the demolition has taken place in those cases with the same swiftness?', Justice Kathawalla said.

The matter was adjourned and will come up for hearing on September 28 at 11 am.

During the hearing of Kangana Ranaut's case in #BombayHC, Justice Kathawalla asks BMC's lawyer if the civic body has acted with the "same swiftness" against other unauthorized constructions. BMC asked to respond on Monday (Sep 28).@KanganaTeam @mybmc @rautsanjay61 https://t.co/rhbBEjaJWn