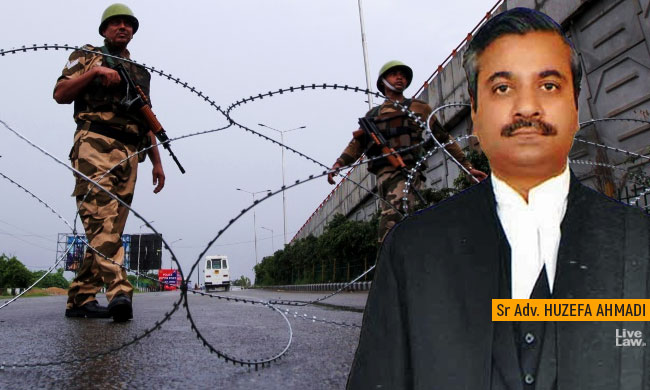 x
A government can't completely restrict a citizen's right to protest and people must be allowed to disagree.

As the communication lockdown continues, for its 106th day today, in Jammu and Kashmir, Supreme Court's 3 judge bench comprising of Justices NV Ramana, Subhash Reddy and BR Gavai continued hearing matters the petitions challenging the restrictions imposed in the region post the abrogation of the state's special status. Noting that the matter is one of great importance, the bench decided to...

As the communication lockdown continues, for its 106th day today, in Jammu and Kashmir, Supreme Court's 3 judge bench comprising of Justices NV Ramana, Subhash Reddy and BR Gavai continued hearing matters the petitions challenging the restrictions imposed in the region post the abrogation of the state's special status.

Noting that the matter is one of great importance, the bench decided to clear the rest of the board for the day, and to only hear this case. They said they wanted the petitioners to complete their arguments today itself.

Senior advocate Huzefa Ahmadi, representing the Indian Journalist's Union, resumed his arguments from the previous hearing. The Union has intervened in the petition filed by Kashmir Times Editor Anuradha Bhasin challenging the media curbs and internet shutdown in the region.

He argued first on the reasonableness of the government action ordering a blanket restriction across J&K. He relied extensively on the infamous ADM Jabalpur case, which had  upheld the government's argument that fundamental right to life and personal liberty remain suspended during emergency. Eventually this controversial decision was overruled by a 9-judge bench in the Right to Privacy judgment in 2017.

Ahmadi drew parallels from the ADM Jabalpur case to the present case by describing the Kashmir situation as an undeclared emergency. During emergency, the government detained people and used the excuse of executive supremacy to not allow the detenues to move court. Here the government cites national security to not produce copies of orders or reasons or material before the court. Ahmadi referred to the dissenting judgment of J HR Khanna in ADM Jabalpur where it was held that even in the absence of Article 21, no one could be deprived of their right to life and liberty without authority of law. Therefore, the suspension of rights of millions of Kashmiris on the grounds of national security is not justifiable.

#Kashmir
Sr Adv Ahmadi : There was an emergency then, not in the present case. No need to give reasons then, they said. Saying the same in this case. No one can be deprived of right to life and liberty without authority of law. Even in the absence of Art21.

Ahamdi also referred to the argument made by Senior Advocate Kapil Sibal during an earlier hearing that restrictions of such a large scale can be imposed only by declaring emergency and not by taking recourse to Section 144 of Code of Criminal Procedure.

It was submitted that orders under Section 144 of the CrPC must be based on material facts which led to an informed opinion, and not only on mere apprehension. Upon being questioned by the bench, Ahmadi clarified that material facts regarding specific districts for which specific orders had been passed to justify apprehension of breach of peace must be placed. If such a process was sidestepped, continued the senior counsel, it could become a norm and the government could impose Section 144 whenever they felt like, on the basis of an apprehension. Referring to Section 5(2) of the Telegraph Act, he argued that our jurisprudence did not allow for a presumption of criminality to be based on grounds of suspicion.

#Kashmir
Sr Adv Ahmadi refers to 5(2) of Telegraph Act. "Our jurisprudence does not allow for a presumption of criminality based on suspicion", he submits.
Refering to precedents to buttress the point

Moving on to the issue of proportionality, Ahmadi submitted that restrictions imposed under Art 19 must pass the test of proportionality. The test, he stated, is that measures taken have to be in order to meet a legitimate goal or suitable cause and that the same must not have a disproportionate impact. The tests fails if you achieve the end but fail on proportionality, he added.

Citing the Aadhaar judgment, he urged that Supreme Court had held that in matters concerning restrictions on liberty and privacy, even to achieve a legitimate end, the route must be least intrusive and that restrictions must be tailored narrowly. The Apex court had struck down the linkage of Aadhar and banks on the presumption that everyone is a money launderer, he asserted.

Ahmadi concluded by referring to yesterday's Hong Kong court judgement which held that a ban on face masks by the government was unconstitutional. A government can't completely restrict a citizen's right to protest and people must be allowed to disagree.

After that, Senior Advocate Dushyant Dave argued on behalf of another intervenor (Report about Dave's arguments may be read here).

On November 5, Advocate Vrinda Grover had made submissions on behalf of Anuradha Bhasin, Executive Director of Kashmir Times. She submitted that the internet lockdown was a disproportionate measure and that the restrictions have amounted to abrogation of the right to freedom of speech itself (Reports may be read here and here).

Last week, Senior Advocate Kapil Sibal had made submissions on behalf of the Congress MP Ghulam Nabi Azad in the matter.

Sibal argued that the lockdown was highly disproportionate and added that never before have lives of seven billion people been paralyzed like this(Report may be read here).

On the next day of hearing, he submitted that restrictions of such a large scale can be imposed only be declaring an emergency under Article 352 of the Constitution and not through Section 144 of Code of Criminal Procedure (Report may be read here).