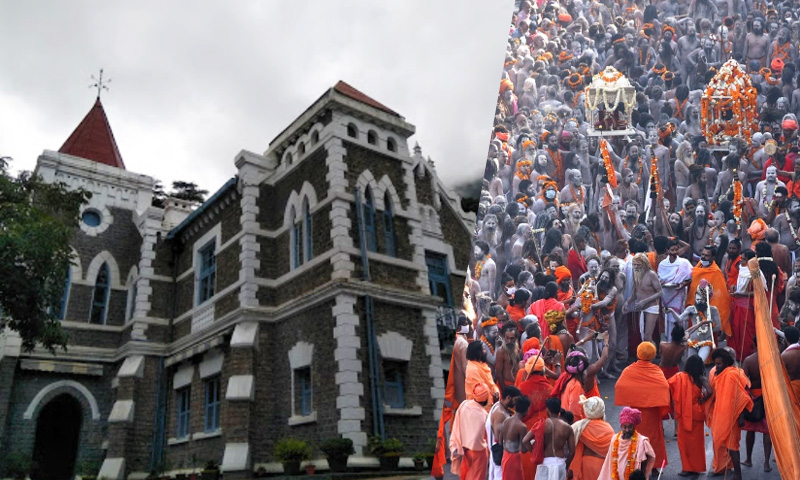 The Uttarakhand High Court on Thursday (May 20) made critical observations against the State Government for allowing the 'Kumbh Mela', in which over 10 million devotees congregated over several weeks, during the COVID-19 pandemic.The Court came down heavily on the State Government over its failure to ensure that COVID norms were being followed in the temples and religious festivals.The Bench...

The Uttarakhand High Court on Thursday (May 20) made critical observations against the State Government for allowing the 'Kumbh Mela', in which over 10 million devotees congregated over several weeks, during the COVID-19 pandemic.

The Court came down heavily on the State Government over its failure to ensure that COVID norms were being followed in the temples and religious festivals.

The Bench of Chief Justice Raghvendra Singh Chauhan and Justice Alok Verma observed that in Badrinath and Kedarnath, the concerned priests were not maintaining social distancing COVID protocols.

While questioning the State as to what would happen if COVID spreads among the priests, Chief Justice R. S. Chauhan specifically remarked,

"In Kedarnath & Badrinath temples, I have seen videos that social distancing is not being followed by the Priests. Even if diety is being worshipped, you can't let 23 priests enter the temple. Who is the person appointed by the State to monitor this?"

Chief Justice further added that such videos were causing embarrassment to the State of Uttarakhand. The Court also slammed the state government for not informing about the steps to implement the SOP for Char Dham.

The Court said to the Government counsel,

"First we allowed Kumbh Mela 2021 and now this is being done (Chardham). Please get a chopper and visit Char Dham, go to Kedarnath and Badrinath and see for yourself, what is happening."

CJ Chauhan to State Government: I feel embarrassed when my colleagues call and ask as to what is happening to the citizens of our state, what can I say to them? I am not the decision-maker, Government is the decision maker.
You have been careless in #chardhamyatra. where is SOP?
— Live Law (@LiveLawIndia) May 20, 2021

Importantly, referring to Kautilya's Arthashastra, the Court said that "you (the State) can fool the Court but can't fool the people" and that it has been careless. The Court also asked the Government to pay visit to Chardham to see for themselves what was happening and that the Ministers should visit the state and get to know the reality.

CJ Chauhan to State: Please read #Kautilya's Arthashastra and visit parts of the state as there is no other way to see what is happening to the people of the state. #UttarakhandHighCourt #COVIDManagement

Stressing that there are many issues like COVID, Black Fungus, and the approaching 3rd wave of COVID, the Chief Justice also noted that the decision-makers were being careless and that the State Government, along with the Judiciary was accountable to the people.

Further, the Court also remarked that the presence of the Chief Secretary for the State had acted as a catalyst in Kumbh Mela as he camped there and thereafter things turned for the worse.

CJ Chauhan to State: Instead of preparing ourselves for the upcoming challenges and dangers, we are being so careless in #chardhamyatra. SOP would not be complied with unless you visit the place in question

Last week, the Court had observed that the State Government had ignored the warning given by experts about the second wave of the COVID19 pandemic.

On May 10, the Court had directed the State to strictly enforce the SOP for Char Dham.

Issue of availability of Doctors and Remdesivir

Chief Justice Chauhan asked the State Government that did it take any against CIPLA as it failed to supply an adequate amount of Remdesivir (as per the contract).

To this, the States' Counsel said that the Government had put pressure on CIPLA, and asked them to supply otherwise action would be taken against them.

Further, on the issue of employing doctors, the Court orally remarked,

"Employing doctors, isn't like buying tomatoes, why would any doctor want to come and work in Uttarkashi, they would working in Noida, Delhi, etc. If the state says that the selection process for doctors going on, I understand that it is a long-drawn process. We can't expect the State to perform miracles, if they are in the process to employ doctors, we need to give them time. The selection process cannot be completed overnight."

The Chief Justice also said it doesn't want that unqualified medical staff is appointed by rushing the process and that quacks are appointed.

Story to be updated with order copy