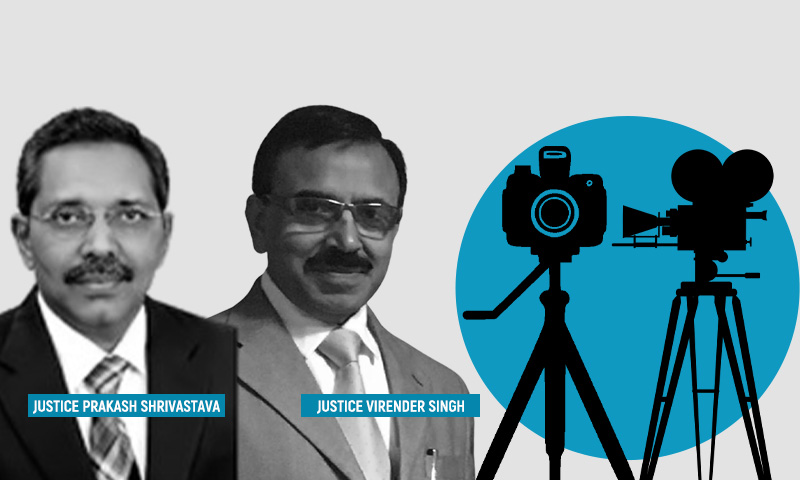 While hearing a writ plea filed by 4 Journalists seeking media access to Court's Proceedings, the Madhya Pradesh High Court today orally observed that the High Court administration has decided to "give you, what you (Journalists) wanted".A Division Bench of Justice Prakash Srivastava and Justice Virender Singh orally observed that "you people have in fact assisted the Court and the E-Committee...

While hearing a writ plea filed by 4 Journalists seeking media access to Court's Proceedings, the Madhya Pradesh High Court today orally observed that the High Court administration has decided to "give you, what you (Journalists) wanted".

A Division Bench of Justice Prakash Srivastava and Justice Virender Singh orally observed that "you people have in fact assisted the Court and the E-Committee of the High Court has taken a decision to provide the live web links of the hearings being conducted through virtual mode on its website".

#Breaking #MadhyaPradeshHighCourt decides to start sharing VC links on its website and thus allows the plea by 4 legal journalists seeking VC access for journalists.
"We have given you what you wanted & your prayer has been accepted," remarked the Court allowing media access. pic.twitter.com/is5aI9lQ8y
— Live Law (@LiveLawIndia) June 17, 2021

However, the Court did add that reporting of Court proceedings should continue to be accurate and responsible and that the exceptions as provided under the Swapnil Tripathi case should be taken care of.

"The judgment of the Supreme Court in Swapnil Tripathi has to be given full effect to and the High Court is bound by it. However, this is subject to exceptions as adumbrated in the aforesaid judgment of maintaining privacy of proceedings in appropriate cases wherever required."

The Registrar General, High Court had yesterday filed an Affidavit stating that the E-Committee has decided to provide joining links on the website for the media to access the proceedings publicly of any matter being heard by the High Court through video conferencing.

The High Court Administration has also informed the Judicial side that the Rules pertaining to the live streaming and access to proceedings are being framed and therefore the said serves the purpose of the writ petition for the time being.

Yesterday, the Madhya Pradesh High Court administration had submitted by way of an affidavit that they have decided that it will start providing the web links on its website so that the same could be accessed and court proceedings could be viewed which are currently being held via video conferencing mode.

The copy of the statement filed by the High Court Administration, and accessed by Live Law, further states that it has approved to provide the weblinks and a resolution to this effect had been passed on June 15 pursuant to a meeting of the High Court's Computer and e-Committee, which was held on June 14.

Today, when the matter was taken up, the petitioners were represented by Senior Advocate Mr. Nidhesh Gupta assisted by Mr. Manu Maheshwari, Advocate.

Mr. Gupta further requested the High Court to implement the decision of the E-Committee for all the Courtrooms of the High Court without any exceptions.

The Division Bench observed that the said request shall be taken on record and be appropriately considered whilst passing the final order allowing the petition.

Mr. Nidhesh Gupta, Senior Advocate, who appeared for the petitioner journalists, said that the Journalists-Petitioners (of Live Law, Bar & Bench, and Dainik Bhaskar) have been meticulous and responsible in the way they report the matter, however, he did add that the Court's sentiments would be conveyed to the Clients.

"There are no two opinions about your right to access the proceedings and we were about to pronounce an interim order which we reserved on the last date. Since the E-Committee took the aforesaid decision and the said was brought on record on behalf of the High Court establishment, therefore we fixed the matter for hearing today. We think your interests are being served and it is appropriate to dispose of the whole matter with the reliefs sought being granted to your clients. We are also grateful for the assistance you have provided throughout to the Court."