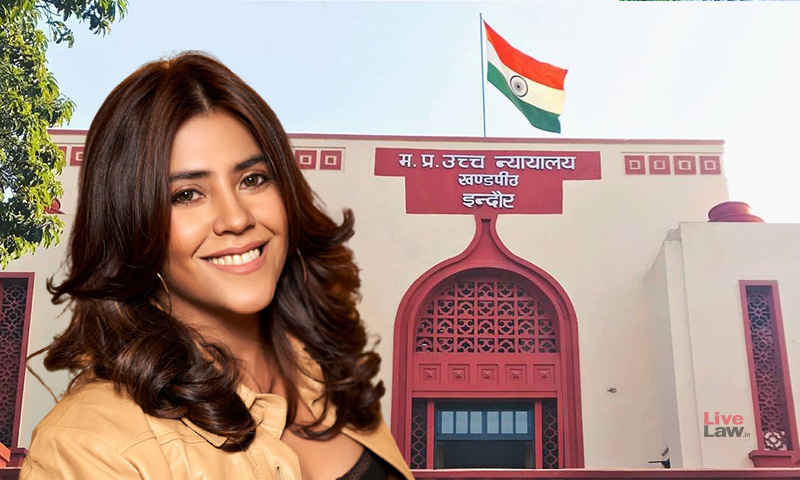 x
"There is always a thin line between what are acceptable limits of display of physical intimacy and obscenity", High Court said.

"Section 67 of Information Technology Act is a cognizable offence and no condition such as disclaimer etc can prevent a person from lodging the FIR in respect of such offence."Stating that a prima facie case is made out, the Madhya Pradesh High Court(Indore Bench) on Wednesday refused to quash the FIR registered against Ekta Kapoor, Managing Director of ALT Balaji, in connection to...

"Section 67 of Information Technology Act is a cognizable offence and no condition such as disclaimer etc can prevent a person from lodging the FIR in respect of such offence."

A Single Bench of Justice Shailendra Shukla observed that in order to determine as to whether a particular matter is obscene or not, recording of evidence may be an important exercise. "As far as the present case is concerned, it cannot be stated outrightly that the impugned episode is not obscene," it held.

Kapoor had moved the High Court stating that she did not have any knowledge of the contents of episode because she is not the producer or the director and her name is not reflected in the credits for the episode.

Rejecting this argument, the High Court held that Kapoor being the Managing Director of the platform on which the show was released, she is "presumed to have knowledge" about the contents of the episode.

Referring to Section 67 of Information Technology Act, 2000, the Court held,

"In the aforesaid provision, there are no such words that the person who publishes or transmits or caused to be published or transmitted in the electronic form any lascivious material or such material which appeals to prurient interest was having or supposed to be having the knowledge about the content of the material. Thus, even if the content is not known and a person publishes or transmits or caused to do so even without knowledge, provisions of Section 67 of Information Technology Act, 2000, would be attracted. Presumption of knowledge on the part of petitioner shall have to be assumed and onus will be upon the petitioner to rebut such presumption by leading evidence."

Kapoor had contended that the Internet is full of much more explicit forms of obscenity and therefore much ado ought not be made about the impugned material.

Responding to this, the Court made significant remarks as follows:

"The flooding of obscene material on Internet is primarily because the concerned authorities have not been able to device a mechanism to isolate and prevent such material and such failure ought not to be considered to be valid rationalization on the part of petitioner. Such submission is akin to an excuse by a person who spreads garbage in a residential colony on the ground that the aforesaid colony is already unhygienic and unclean."

She also argued that if at all any case is made out against her, she cannot be prosecuted in isolation without impleading the company ALT Balaji as co-accused. Reliance was placed on Aneeta Hada v. Godfather Travels & Tours Pvt. Ltd., 2012(5) SCC 661, in which it has been laid down that the Director of Company cannot be held liable without impleading the Company.

The Court however this submission is "premature" as the matter is still under investigation and the chargesheet has yet not been filed. It observed that this case is distinguishable from Aneeta Hada's case inasmuch as in this case, it was not in the hands of complainant to ensure that the Company is also named as an accused. It clarified,

"The case of Aneeta Hada (supra) was a complaint case filed under Sections 138 and 141 of NI Act, 1881 and the responsibility was on the complainant to include the Company as an accused. Hence, the analogy of Aneeta Hada's case (supra) cannot be taken at this stage of investigation in the present case.."

It further stated that the Complainant, in his FIR, had sought action against ALT Balaji as well and the company may be impleaded as an accused in the charge sheet.

Kapoor had argued that the episode does not depict obscenity and the impugned scenes of physical intimacy are not graphic in nature but are simulated.

The Court however held that it cannot be stated outrightly that material is not obscene in nature.

"At this stage it cannot be stated that provisions of Section 67 of IT Act are not attracted. Regarding Section 67-A of IT Act also, one has to decide as to what is the true meaning of sexually explicit acts i.e. whether a graphic depiction would only constitute "explicit Act" or whether a simulated act of copulation may also result in invoking this provision.

In order to determine whether the matter is obscene or not objective assessment of the material is required. In order to do away the chance of subjective attitude of a Judge involving his personal preference, recording of evidence would be necessitated."

"The Indian audiences have of course come of age from the times of two flowers cuddling each other symbolizing male and female union to more explicit manners of displaying such activity. Still, the acceptable norms of permissiveness in the society cannot be equated with declining moral values. What is patently obscene from an ordinary person's point of view, would remain to be so for all times to come. There is always a thin line between what are acceptable limits of display of physical intimacy and obscenity."

The Complainant had submitted that a particular scene in the series (where army uniform is worn while committing intimate activities) breaches the sanctity of the National emblem, amounting to its dishonour.

However, the Court did not find merit in this submission and held that provision of Section 298 of IPC and the provision of the State Emblem Act are not found to have been breached. It explained,

"A perusal of Section 3 (of the State Emblem Act) makes it clear that the breach of this provision would occur only when the emblem is used in order to create an impression that it relates to the Government or it is an official document of the Central Government. This provision could apply in cases where a person actually would use such emblem on his car or uniform, or any other place, thereby giving an impression that the aforesaid car uniform etc relates to the Government, ie., it is Government property and the person shows as if he is authorized to use such property. Only such use of emblem is prohibited under the Act. Section 4 of the Act prohibits use of emblem for wrongful gain pertaining to any trade, business, patent or design etc. No other act or omission provides for punishment under the Act."

It further stated that the Prevention of Insults to National Honour Act, 1971 prohibits insulting National Flag and Constitution of India. This Act does not encompass National Emblem.

Kapoor had then contended that the impugned material was available to be watched only by adults. Rejecting this submission as irrelevant, the Court held that if the material is obscene, it is immaterial that a subscriber is major in terms of age.

"What is punishable is "obscenity" and once the material comes within the ambit of obscenity, it is immaterial that the person is major in terms of age. The only test would be the test of an ordinary person and not hyper-sensitive person," the Court said.

Kapoor had argued that inappropriate restrictions would infringe the freedom of speech and expression guaranteed under Article 19(1)(a) of the Constitution of India.

Declining this submission, the Court held that Freedom is subject to reasonable restriction and if the material is against public decency and morality and the impugned material is obscene as per Section 292 of IPC, such freedom is liable to be curtained under Article 19(2) of the Constitution.

"While considering as to whether a particular material is obscene or not, the aspects of morality and public decency will also be required to be kept in mind," it remarked.

Kapoor had submitted that appropriate precautions have been taken by publishing a disclaimer that the programme contains a strong language, mature and intimate scenes.

Regarding such disclaimer and the terms of use preventing the subscriber from complaining, the Court said, do not 'insulate' the petitioner from action against her if the material itself invokes application of Section 67 of Information Technology Act, 2000. It held,

"Section 67 of Information Technology Act is a cognizable offence and no condition such as disclaimer etc can prevent a person from lodging the FIR in respect of such offence."

Kapoor had contended that the show was available on subscription basis and thus provision of Section 294 of IPC shall not be applicable because the episode is not shown on public space.

The State had argued that the term "public place" has not been defined under IPC and hence the definition of public place shall have to be borrowed from the IT Act where Section 80(1) defines it to be a place as any place which is intended to be used by public or which is accessible to the public.

The Court referred to various judgments relating to definition and scope of 'public space. On a perusal of the same, it concluded,

"hotel, shop, public conveyance are also public place as against some of the aforesaid citations and the word "any other place intended for use by or, accessible to the public" would not only include free to air transmissions, but also transmissions based on subscription. Thus, prima facie provisions of Section 294 of Indian Penal Code, 1860, are also attracted."

Lastly, the Court rejected Kapoor's submission that a person who has paid the subscription fees and has watched the material cannot complain later on that the material is obscene, in view of the maxim of 'Volenti Non-Fit Injuria'.

"I am afraid, this principle applies in a matter involving tortuous liability and not criminal liability. Hence, in my humble opinion, once it is determined that the material is obscene, then person liable for depicting such material or causing to depict such material cannot escape his liability on the ground that the subscriber having opted to watch it cannot make a complaint thereafter. Further, the disclaimer only had warned against scenes of intimacy in the episode but if the depicted scenes transcend into such gross display of lust that transgressing bare depiction of intimacy, such scenes enter into the realm of obscenity, a subscriber would be well within his right to complain."

Kapoor has been booked under sections 294 (obscene acts and songs) and 298 (Uttering, words, etc., with deliberate intent to wound the religious feelings of any person) & 34 of the Indian Penal Code, Sections 67 (Punishment for publishing or transmitting obscene material in electronic form) and 67-A (Punishment for publishing or transmitting of material containing sexually explicit act, etc. in electronic form) of the Information Technology (IT) Act, and Section 3 ( Prohibition of improper use of emblem) of the State Emblem of India (Prohibition of Improper Use) Act, 2005.

"It is a settled principle of law that the person demanding writ in the nature of mandamus is first required to make a demand from the Authority competent. A deviation from such settled principle can be made only in extraordinary circumstances and no such circumstance has been pointed out by the petitioner in this petition for writ," the Court had said.