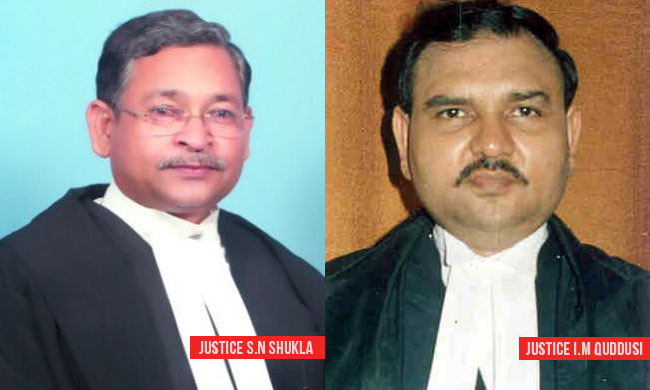 The Central Bureau of Investigation has registered an FIR against Justice Shri Narayan Shukla of the Allahabad High Court alleging that the sitting judge took illegal gratification for passing a favourable order in matter regarding Prasad Institute of Medical Science, Lucknow.

As per reports, the CBI on Friday conducted raids at the premises of Justice Shukla.

Former judge of Orissa High Court Justice IM Quddusi is also named in the FIR registered on December 4. The accused have been booked under Section 120B of the Indian Penal Code along with Sections 7, 8, 12, and 13(2) read with Section 13(1)(d) of the Prevention of Corruption Act.

The said institute which comes under the umbrella of Prasad Education Trust (PET) was debarred by the Ministry of Health & Family Welfare (MoHFW), Government of India from admitting medical students for coming 2 years because of substandard facilities and non-fulfilment of the required criteria in May 2017. In total, 46 colleges were debarred by the MoHFW Govt. of India on similar grounds.

PET filed a writ petition in the Supreme Court against the order of MoHFW dated May 31, 2017. Apex Court directed MoHFW to consider afresh the materials on record pertaining to the issue of the Letter of Permission granted to the petitioner colleges/institutions. The Court made it clear that in undertaking this exercise, the Central Government would re-evaluate the recommendations of the Medical Council of India (MCI), hearing committee, DGHS and the Oversight Committee as available on record.

Supreme Court directed to offer an opportunity of hearing to the petitioner colleges/institutions to the extent necessary. The MoHFW complied with the direction of the Supreme Court and passed the order dated August 10, 2017. It reiterated its earlier decision to debar PET from admitting medical students for next two academic years 2017-18 and 2018-19 and also authorized the MCI to encash the bank guarantee of Rs. 2 crores submitted by PET.

The aforementioned order by MoHFW was challenged before the apex court. As per the FIR, a conspiracy was hatched between BP Yadav, Chairman, Prasad Educational Trust, IM Quddusi, , Shawana Pandey, a private person through Sudhir Giri of Venkateshwara Medical College (Meerut) in order to obtain a favourable order from Justice Narayan Shukla at Lucknow Bench by corrupt and illegal means.

"In furtherance of said conspiracy Sh. IM Quddusi engaged Justice Shri Narayan Shukla, for managing the matter. The writ petition was withdrawn from the Hon'ble Supreme Court of India in order to file a petition in the High Court of Allahabad, Lucknow Bench against the order dated August 10, 2017 passed by the MoHFW with dishonest intention to obtain a favourable order for PET through Justice Sri Narayan Shukla.

The Apex Court allowed the prayer of PET to withdraw the writ petition. Thereafter, IM Quddusi and BP Yadav met Justice SN Shukla in the morning of August 25, 2017 at his residence in Lucknow regarding the matter and delivered illegal gratification."

"we hereby direct to list this matter on 31. 08.2017, in the meanwhile the petitioner's college shall not be de listed from the list of colleges notified for counselling till the next date of listing i.e. 31.08.2017. Further, the encashment of the Bank Guarantee is also stayed till next date of listing. It is clarified that on the basis of this order, the petitioners shall have no right to claim any admission of the students"