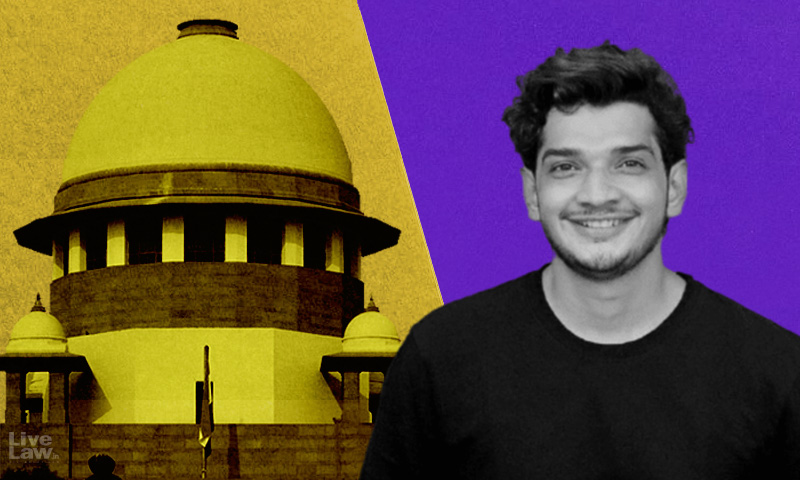 The Supreme Court on Friday granted ad-interim bail to comedian Munawar Faruqui in a case registered by Madhya Pradesh police for alleged hurting of religious sentiments."The learned counsel has pointed out to us that quite apart from the fact that the allegations made in the FIR are vague that the procedure contained in Section 41 Cr.P.C. as adumbrated by our Judgment in "Arnesh Kumar Vs....

The Supreme Court on Friday granted ad-interim bail to comedian Munawar Faruqui in a case registered by Madhya Pradesh police for alleged hurting of religious sentiments.

"The learned counsel has pointed out to us that quite apart from the fact that the allegations made in the FIR are vague that the procedure contained in Section 41 Cr.P.C. as adumbrated by our Judgment in "Arnesh Kumar Vs. State of Bihar & Anr.", reported in (2014) 8 SCC 273, has not been followed before arresting the petitioner. This being the case, we issue notice in both the petitions, and stay the Judgment of the High Court. The petitioner is released on ad-interim bail on conditions to the satisfaction of the trial court"

The bench has also issued notice on the  special leave petition filed by comedian Munawar Faruqui challenging the Madhya Pradesh High Court order which denied him bail in a case for alleged hurting of religious sentiments.

A bench comprising Justices RF Nariman and BR Gavai granted ad-interim bail to Faruqui after noting the submission of his counsel, Senior Advocate Saurabh Kirpal, that the arrest was made in violation of Section 41A of the Code of Criminal Procedure.

The Bench has also stayed the the production warrant issued in a case by UP Police.

During the hearing, Justice Nariman asked Senior Adv Saurabh Kirpal (appearing for Faruqui) if the principles laid down in the case of Arnesh Kumar v. Stat of Bihar were followed.

In Arnesh Kumar v. State of Bihar, (2014) 8 SCC 273, it was categorically held that in all cases where the arrest of a person is not required under Section 41(1), Cr.PC, the police officer is required to issue notice directing the accused to appear before him at a specified place and time. Law obliges such an accused to appear before the police officer and it further mandates that if such an accused complies with the terms of notice he shall not be arrested, unless for reasons to be recorded, the police office is of the opinion that the arrest is necessary.

The Bench was considering the special leave petition filed against the order passed by the High Court on January 28. Apart from the SLP challenging the HC order, Munawar Faruqui has also filed a writ petition against the MP police FIR.

"This is a case of victimization," Kirpal said.

Faruqui, a resident of Gujarat, was arrested on January 2 along with four others for allegedly making indecent remarks against Hindu deities and against Union Home Minister Amit Shah during a show held at a cafe in 56 Dukan area of Indore on January 1.

The complaint was filed against them by Eklavya Singh Gaur (36), son of local BJP legislator Malini Laxman Singh Gaur.

The other arrested persons were identified as Edwin Anthony, Nalin Yadav, Prakhar Vyas and Priyam Vyas.

On January 28, a single bench of Justice Rohit Arya of the MP High Court(Indore Bench) dismissed the bail applications filed by Faruqui and the show's organizer Nalin Yadav observing that no case was made out for grant of bail.

The bench observed that the investigation conducted so far suggested that "disparaging utterances, outraging religious feelings of a class of citizens of India with deliberate intendment, were made by the applicants".

Faruqui contended that he never made the statements during the show as alleged.

In the hearing on January 25, Justice Rohit Arya had orally remarked "Such people must not be spared".

"But why you take undue advantage of other's religious sentiments and emotions. What is wrong with your mindset? How can you do this for the purpose of your business?", the judge had asked during the hearing.