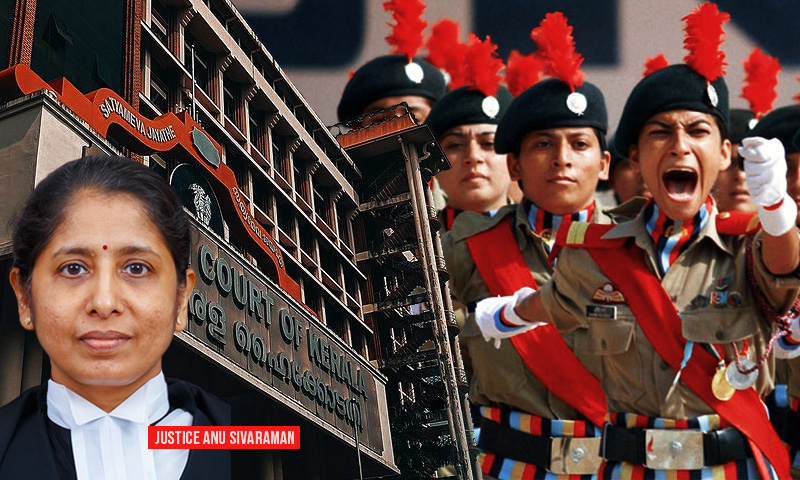 In a path-breaking judgment, the Kerala High Court on Monday allowed a petition moved by transwoman Hina Haneefa seeking her admission into the National Cadet Corps (NCC)."The petitioner shall be allowed to apply for enrolment into NCC in the senior girls division, as per her self-perceived gender identity", ruled a single bench of Justice Anu Sivaraman, allowing Hina Haneefa's plea.The...

In a path-breaking judgment, the Kerala High Court on Monday allowed a petition moved by transwoman Hina Haneefa seeking her admission into the National Cadet Corps (NCC).

"The petitioner shall be allowed to apply for enrolment into NCC in the senior girls division, as per her self-perceived gender identity", ruled a single bench of Justice Anu Sivaraman, allowing Hina Haneefa's plea.

The Court noted that the Transgender Persons(Protection of Rights) Act 2019  recognises the right of transgender persons to a life of dignity, prohibits discrimination as against them. Provisions of the NCC Act cannot preclude the operation of the Transgender Rights Act, 2019.

"The enactment was one intended to give effect to the rights guaranteed to such persons u/Arts 14, 15, 19, and 21 of the Constitution, has to be borne in mind when considering cases of this nature. In view of the specific provisions of the 2019 Act, a transgender person has the right to be recognised not only as a transgender but also a right to self-perceived gender identity", the  judgment pronounced by Justice Anu Sivaraman held.

"I am of the opinion the petition who has opted for female gender and has undergone two SRS surgeries for aiding her self perception as a member of the said gender will definitely be entitled to enrolment in the NCC Unit reckoning her as a transgender and further as a member of her self-perceived gender, ie female gender.

The fact that NCC Act does not recognise the thrid gender or that detailed guidelines are required to be drawn up for integration of persons of the third gender into the armed forces or the NCC, cannot, according to me, be a justification to deny entry to the petitioner into NCC.

The Court has directed respondents to make such changes without delay, within six months.

The petitioner, a student at the University College at Thiruvananthapuram, moved the Court aggrieved that she was not being allowed to apply for enrolment with the NCC on account of her gender. Her representations in this regard were not acted upon, her petition narrated.

Haneefa's petition challenged Section 6 of NCC Act which allows only males and females to enrol with the Corps, effectively excluding transgender persons from enrolling with the Corps.

The petition termed the exclusion as arbitrary and called upon the intervention of the Court to direct the NCC to suitably amend their enrolment criteria to allow for the enrolment of transgender persons.

Additionally, her petition averred that the inclusion of sexual minorities such as transgender persons is necessary to address the rampant marginalisation and discrimination faced by them.

The NCC, in its affidavit before Court, submitted that it is the prerogative of Central Government to constitute a new division for the third gender and that as of now, only male and female genders are allowed entry to National Cadet Corps (NCC) and Armed Forces and there is no provision in law allowing entry of Transgender persons.

At a previous hearing of Haneefa's petition, the presiding Judge Justice Devan Ramachandran had asked the Counsel for the NCC,why she could not be admitted as a female under the provisions of the NCC Act. The Central Government Counsel's response that she was being denied an opportunity to enrol on account of her being a transgender did not find favour with the Court.

Taking exception to this stance, the Judge stated that the submission was not acceptable in view of the State's Transgender Policy of 2015, which allows transgender persons to identify themselves by their self-perceived gender identities.

"Person cannot be denied a legitimate right only because she is a transgender", the Judge emphasised.

At the hearing of the case on November 12, the Court had directed the NCC Unit at her college to keep a seat vacant for Haneefa pending the disposal of the writ petition.

In this light, her counsel Advocate Raghul Sudheesh asserted that she could be allowed in NCC as a female without new arrangements being made for her, especially as the Supreme Court's NALSA judgment recognises self-perceived gender identity.

The matter was reserved for judgment on February 4, 2021.