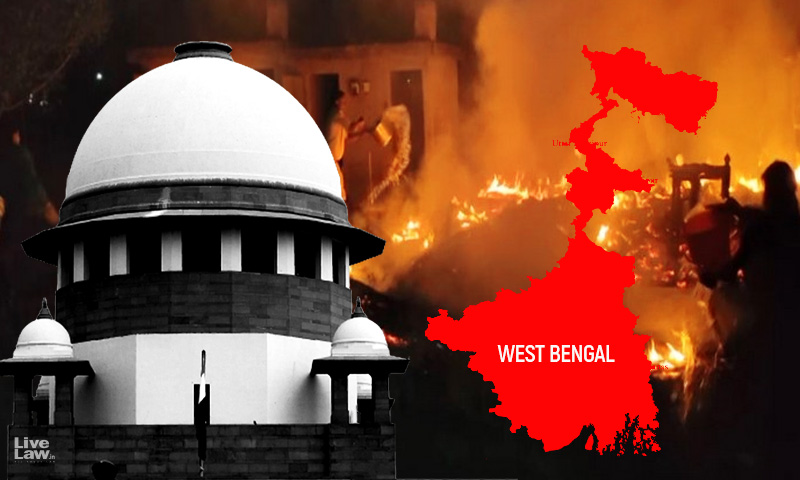 Challenging the Calcutta High Court's order directing CBI probe into the post poll violence cases related to murder and rape, Senior Advocate Kapil Sibal, appearing for the State of West Bengal, questioned the neutrality of the fact-finding committee formed by the National Human Rights Commission.The NHRC committee was asked by the High Court to prepare a report on the post-poll violence cases...

The NHRC committee was asked by the High Court to prepare a report on the post-poll violence cases in West Bengal. The 5-judge bench of the High Court had referred to this report in its order.

Senior Advocate Sibal alleged that the committee's members had open affiliation to the BJP.

"Is this a BJP investigating committee my Lords?" submitted Senior Advocate Kapil Sibal before the division bench of Justices Vineet Saran and Aniruddha Bose.

To emphasize on the allegations of bias, Senior Counsel also pointed out to the previous posts held by the members in the BJP.

"Can the NHRC appoint such members?" Senior Advocate further submitted.

At this juncture, Justice Aniruddha Bose asked Senior Counsel, "Mr Sibal, if a person has served a post in past, can you say that they will be biased now too?"

"They're still posting posts related to BJP My Lords," the Senior Counsel replied. He further said that another another member who was a part of BJP Mahila Morcha in Gujarat.

Senior Advocate Kapil Sibal had also argued that the High Court did not even prescribe a procedure that was to be followed while collecting the data.

Drawing the Court's attention to the observations put forth by Justices IP Mukerji and Soumen Sen on the portions of the 7 member NHRC Committee's report in their separate but concurring judgements, Senior Advocate submitted that he had also prepared a 20 page chart to point out various contradictions in the judgements delivered.

The bench asked Sibal to submit the chart and adjourned the hearing. The bench also asked Senior Advocate Mahesh Jethmalani, appearing for one of the petitioners before the High Court, to submit a written note.
"We will go through it and have it on Friday or Monday", Justice Saran said.
The State Government in the special leave petition had averred that it did not expect a fair probe as the CBI was acting at Centre's behest and was busy foisting cases against TMC functionaries.

The Calcutta High Court on August 19, 2021 had observed that the CBI investigation would be monitored by the High Court.

"The Committee, NHRC, any other Commission or Authority and the State shall immediately hand over entire record of the cases entrusted to the CBI for investigation. It is made clear that it shall be the Court monitored investigation. Any obstruction in the course of investigation by anyone shall be viewed seriously", the Court observed.

As regards other criminal cases related to post-poll violence, the Court directed that they be investigated by a Special Investigation Team under the monitoring of the Court. IPS officers, Suman Bala Sahoo, Soumen Mitra and Ranbir Kumar of the West Bengal cadre will be members of the SIT.

The High Court had also directed for monitoring the working of SIT by a retired judge of the Supreme Court, who was to be mentioned later in a separate order to be passed.

The Court had directed the State of West Bengal to immediately process the compensation for the victims of the post-poll violence. The Court also rejected the allegations of bias raised by the State Government against the National Human Rights Commission, a team of which had submitted a fact-finding report to the Court as per its directions.

The CBI and the SIT were asked to submit status reports to the Court within six weeks and had ordered the division bench to again consider the matter by October 24.

The Court had also directed the handing over of the autopsy report of Abhijeet Sarkar, a BJP worker who got killed in the post-poll violence and other sealed cover documents to the CBI.