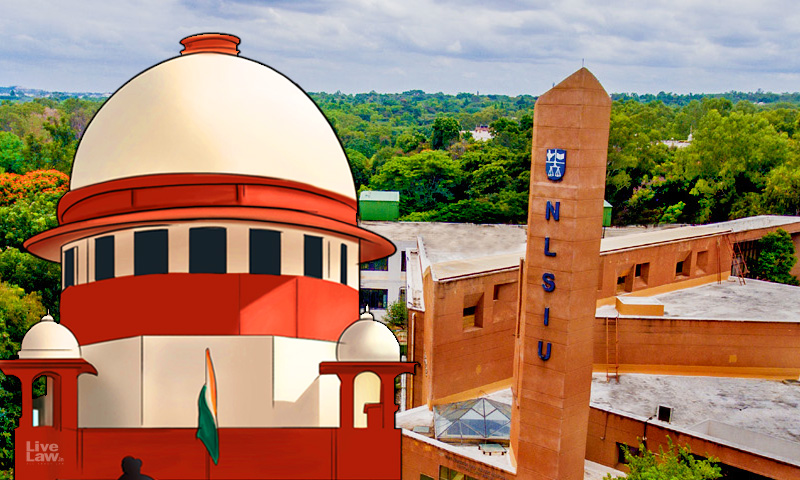 The interim prayer for stay was made in a special leave petition which was filed by the State of Karnataka challenging the October 2020 judgment of the Karnataka High Court which had struck down the amendment act passed by the Karnataka assembly to provide 25% horizontal reservation for Karnataka students.

Senior Advocate Gopal Shankaranarayan, appearing for the applicant seeking stay, argued that the revised admission notification was an attempt to get over the Karnataka High Court's judgment.

In response, Senior Advocate Shankaranarayanan submitted that there are other points in the case apart from the competence issue. The High Court also pointed out that the state had not done any study on backwardness to provide reservation for Karnataka students. The same problem, Shankaranarayanan argued, exists with the latest notification issued by the NLSIU.

The senior counsel also highlighted that the NLSIU had a unique national character and the Bar Council of India was also involved in its establishment.

However, the bench was not persuaded to pass any interim order. The bench also turned down the prayer made by Shankaranarayanan for a posting before the date of CLAT, July 23.

The bench posted the matter to August.

"There is no interim order. List the matter in August. The exams will go on", Justice Rao said.

The interim prayer was sought in the special leave petition filed by the State of Karnataka against last year's judgment of the Karnataka High Court which had quashed the 25% reservation introduced by the legislature.

It was on June 22 that the NLSIU issued the revised notification, announcing 25% horizontal 25% horizontal compartmentalized reservation for Karnataka students in admissions for academic year 2021-22. Candidates who have studied for not less than 10 years in a recognized educational institution in Karnataka will be eligible to be considered as "Karnataka Students".

The reservation is applicable to both B.A, LL.B(Hons) and LLM programmes which have the intake capacity of 120 and 50 respectively.

The University, in its revised admission notification, has asked candidates appearing in the Common Law Admission Test (CLAT) to update their reservation option in their applications, if they wish to avail this reservation in NLSIU.

The present reservation is said to be part of the "NLSIU Inclusion and Expansion Plan 2021-2024" adopted by the university "to increase diversity of its students and facilitate greater access to marginalized and/or underprivileged sections of the society in a phased manner".

(Case : State of Karnataka vs Master Balachandar Krishnan and others)