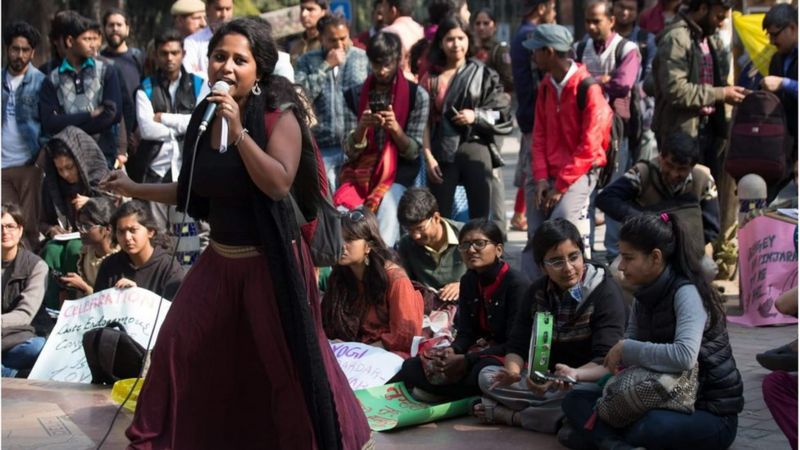 While granting bail to JNU student, Devangana Kalita, in a case related to Delhi riots conspiracy, the Delhi High Court observed that the Delhi police failed to produce any material to show that she instigated women of a particular community or gave hatred speech leading to violence.After going through the case diary along with the pendrive submitted by the police in a sealed cover, the...

While granting bail to JNU student, Devangana Kalita, in a case related to Delhi riots conspiracy, the Delhi High Court observed that the Delhi police failed to produce any material to show that she instigated women of a particular community or gave hatred speech leading to violence.

After going through the case diary along with the pendrive submitted by the police in a sealed cover, the court noted that though her presence is seen in peaceful agitation, there was no material produced to show that she instigated violence or gave hate speech.

"...I have gone through the inner case diary produced in a sealed cover along with pen drive and found that though her presence is seen in peaceful agitation, which is fundamental right guaranteed under Article 19 of the Constitution of India, however, failed to produce any material that she in her speech instigated women of particular community or gave hatred speech due to which precious life of a young man has been sacrificed and property damaged", the observed Justice Suresh Kumar Kait in the order.

The Court made this significant observation after holding that Kalita satisfied the triple tests for grant of bail - viz, no chance of absconding, no probabilities of tampering evidence and coercing witnesses. The Court also noted that chargesheet had been filed in the case on June 2.

Kalit was arrested in FIR No. 50/2020 registered at the Jafrabad Police Station on February 26, 2020, in relation to communal violence which took place in North East Delhi in the last week of February 2020. It was alleged that she mobilized a crowd of a particular community at the protest site near Jaffrabad metro station on February 22-23 with an intention to instigate a section of people to indulge in rioting, and that the violence led to loss of lives and destruction of public and private properties.

In this regard, the Court noted that the agitation (against Citizenship Amendment Act- NRC) was going on for a long time within the presence of print and electronic media and that there was no evidence to show that the offence took place due to the acts of Kalita.

"Admittedly, agitation was going on since long, print and electronic media was present throughout in addition to cameras of police department, but there is no such evidence which establishes that the alleged offence has taken place on the act done by the petitioner, except statements recorded under section 164 Cr.P.C. much belatedly, though, those witnesses were allegedly remain present at the spot throughout", the court said in this regard.

Kalita, one of the founders of the organization 'Pinjra Tod' which works for gender equality, was arrested on May 23 along with her friend Natasha Narwal in relation to the FIR registered over Jafrabad sit-in protest. After they were granted bail in that case, they were re-arrested in another FIR registered by Crime Branch under Unlawful Activities Prevention Act in relation to alleged conspiracy behind Delhi riots.

Before the Dehli HC, Senior Advocate Kapil Sibal, appearing for Kalita, submitted that she was merely organizing protests against CAA-NRC and had no role to play in the riots.

Additional Solicitor General S V Raju, appearing for Delhi police, submitted that there was video evidence of show that Kalit was part of the violent crowd at the site of the protest between February 23 to 25.

The Court, at the outset, noted that the disclosure statement of another accused, Sharukh Pathan(who was arrested for firing at the police), did not contain the name of the petitioner.

Further, the Court noted that she never made an attempt to evade arrest.

"The petitioner is a student pursuing her higher education and sufficient standing in society without any possibility of fleeing from justice", the Court observed in this regard.

It was further noted that there was no possibility of tampering of the evidence as all the materials were with the investigating agency.

"Regarding third test i.e. influencing witnesses are concerned, the petitioner is not in position to influence witnesses in the FIR, which in any event appears to relate to public servants/ police officials, and in any case she came to be arrested almost three months after the registration of the FIR", the Court further said.

The Court expressed the view that Kalita satisfied the triple test for bail and remarked,

At the same time, the Court clarified that it was not commenting on the merits of the prosecution case, the Court held that Kalita was entitled to bail in the present case.

The HC had earlier passed an order restraining Delhi police from releasing information related to her case to the media. That was ordered by Justice Vibhu Bakhru in a writ petition filed by her challenging a press note circulated by Delhi police containing allegations against her.

Though granted bail, Kalita will remain in jail as she is under custody in another FIR (FIR No. 59/2020 of Delhi police crime branch), registered under UAPA for alleged conspiracy behind Delhi riots. A Delhi Court had denied her bail in that case last week.

In June, a Delhi Court had granted bail in another FIR registered over her participation in anti-CAA protests in Daryaganj in Delhi in December 2019, after observing that she was not a habitual offender.

"Pinjra Tod", founded in 2015 by, started as a movement against curfews in girls hostels and gradually emerged as a collective taking up causes related to women's emancipation. Kalita ,an MPhil student at JNU's Centre for Women's Studies and Natasha Narwal, a PhD student at the Centre for Historical Studies, are its founding members.