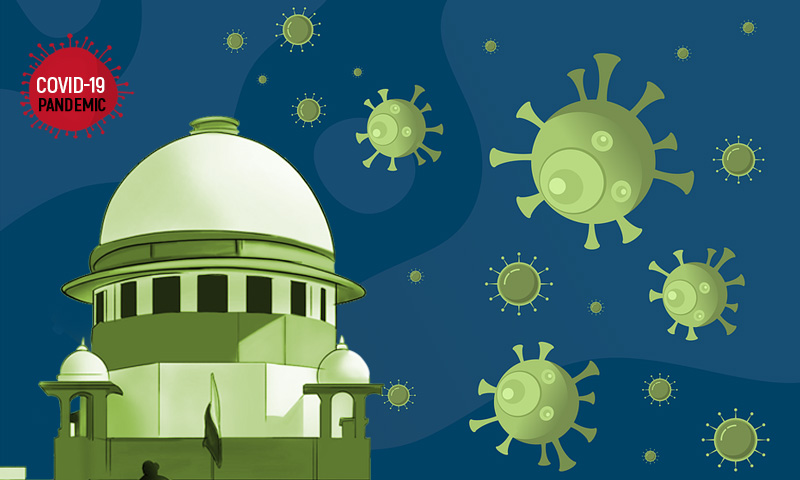 A plea has been filed in the Supreme Court seeking inter-alia, directions to the the Union & State Governments to formulate appropriate guidelines to provide adequate ex-gratia monetary compensation to the next of kind of all Indian citizens in covid19 related deaths/casualties."The state of the world is akin to an emergency, being war-Like in nature, therefore it is imperative to...

A plea has been filed in the Supreme Court seeking inter-alia, directions to the the Union & State Governments to formulate appropriate guidelines to provide adequate ex-gratia monetary compensation to the next of kind of all Indian citizens in covid19 related deaths/casualties.

"The state of the world is akin to an emergency, being war-Like in nature, therefore it is imperative to provide ex-gratia honorary monetary compensation as a mode of relief measure and financial assistance to those families who have lost their loved ones due to COVID19"
Excerpt of Plea

The plea has been filed on behalf of activist Mr. Hashik Thayikandy. it highlights that there is an extreme urgency for intervention in the present "in lights of the increasing death toll of Indian citizens". Stating that the pertinent question which exists as a ground for public interest is whether the Union and State Governments have a constitutional and fundamental duty to protect the interests of Indian citizens in times of distress and worldwide agency, petitioner avers that it is imperative that the rights of millions of Indian citizens who are working diligently for the country each and every day are safeguarded. Some of the people being represented in the present PIL may not be aware of their legal rights being infringed and may not have the economic means to approach this Court, the plea states.

"That the said petition is being filed in the interest of all the Indian citizens who are also the tax payers of this country and work diligently each and every day, leading to the development of nation. The current state of the world is akin to the state of emergency sue to the outbreak of COVID19 which has no cure/vaccine till date and therefore the citizens who are working for the country in the current scenario is equivalent to that of a sacrifice as not only are they working in the interest of other Indian citizens but are also working for the development of our country. The families of such citizens are duly entitled to ex-gratia compensation, owing to the immense hardships being faced by them in the event of death of their loved ones due to COVID19."
- Excerpt of Plea

Various guidelines that have been adopted across states and the centre to protect interests of people have been brought to the fore in the plea towards making, however, it is averred that the "fact must be acknowledged that it is the duty of the State to safeguard the interest and life of its citizens, especially in circumstances wherein the services provided by people are equivalent to that of a sacrifice".

The plea therefore urges for invocation of public law remedies for those citizens who have succumbed to covid19 while discharging their duties of our nation, regardless of the sector of employments.

To substantiate this, the plea suggests that a National relief plan under section 11 of the NDMA be formulated for providing relief in the financial aspects, especially to the financially weaker sections of the society, who have no finances for sustenance and survival means, thereof, by way of compassionate compensation to the dependents of COVID19 related deaths.

In this backdrop, it is prayed that a "Status report" be filed before the Top Court stating the total number of covid19 related deaths.casualties and measures taken by the State authorities or other competent authorities for compensating the loss of life and devise an appropriate "compensation plan" thereto.

The petition has been settled and filed by Mr. Deepak Prakash, AOR and is drafted by Adv. Nachiketa Vajpayee and Adv. Divyangna Malik.