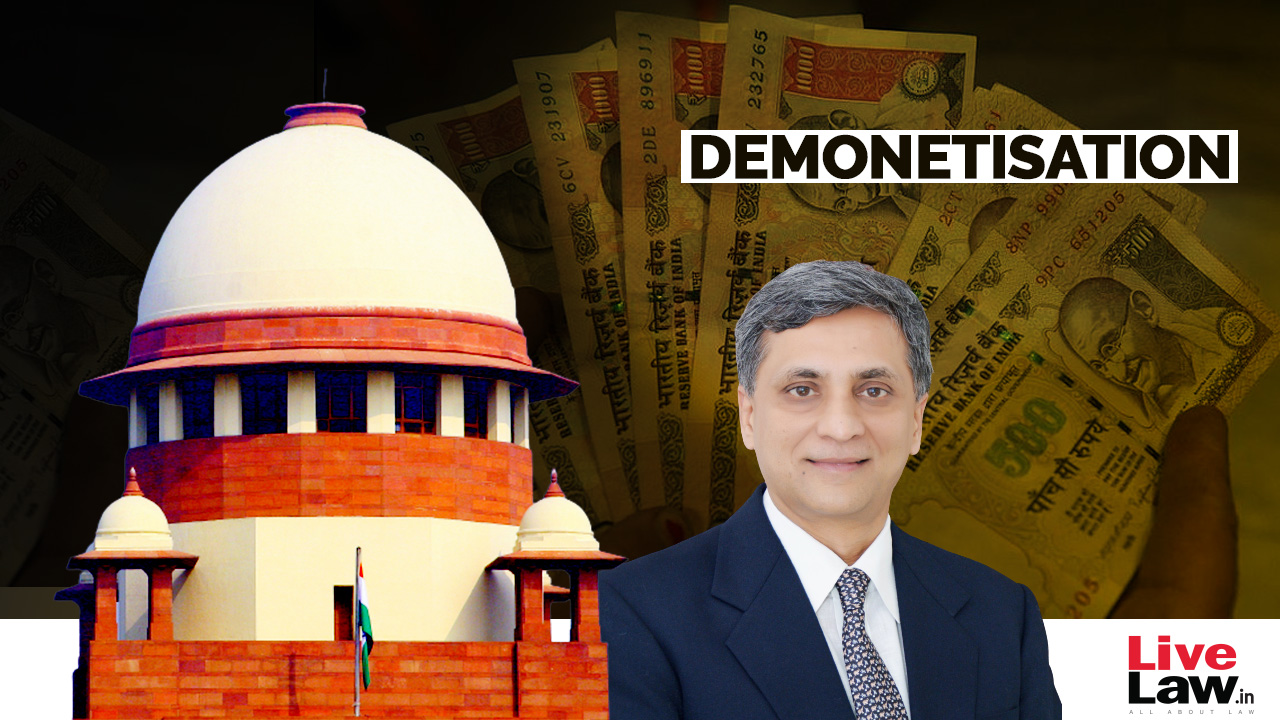 The Central Government or the Reserve Bank of India cannot be allowed to ignore the assurances made to the nation by the Prime Minister on the eve of demonetisation that the window for exchanging old notes would be kept open till March 2017, and deprive a person of their fundamental and constitutional rights, Senior Advocate Shyam Divan told the Supreme Court on Friday. "The Indian prime minister, when he made this very important policy announcement, made certain assurances and representations. This provides a suitable benchmark for any measure of reasonable conduct. Now, to depart from it is highly improper," he submitted before the Constitution Bench hearing a batch of 58 petitions challenging the Bharatiya Janata Party-led government's decision to demonetise high-value currency notes of Rs 500 and Rs 1,000 in November 2016. The five-judge Bench, comprising Justices S. Abdul Nazeer, B.R. Gavai, A.S. Bopanna, V. Ramasubramanian, and B.V. Nagarathna, is considering, inter alia, the legality of the November 8 circular that set the policy in motion, six years after it sent shockwaves through the nation.

The senior counsel, taking the court through a compilation of notifications, notices, circulars, and press releases issued by the Ministry of Finance, the Reserve Bank, and the Press Information Bureau, said, "All these were completely consistent with the assurance that was extended by the prime minister in his address. Everyone – the Prime Minister, Government Bureau, Finance Ministry, Press Bureau, Reserve Bank – was speaking in one voice. Broadly, the representation was that end of December was not going to be a hard stop with respect to the exchange of notes." Divan was appearing on behalf of an aggrieved petitioner who had left behind Rs 1.62 lakhs in cash when he travelled abroad in April 2016 but could not exchange his money when he finally returned to the country in February 2017.

On December 30, 2016, in the exercise of the power conferred by the Specified Bank Notes (Cessation of Liabilities) Ordinance, which was promulgated on that very day to statutorily extinguish the liabilities of the Reserve Bank under Section 34 of the Reserve Bank of India Act, 1934 and the guarantee of the Central Government under Section 26(1) with respect to the demonetised banknotes. The central government notified that the "grace period" to exchange old banknotes would extend up to March 31, 2017, for residents of India and up to June 30, 2017, for non-residents. Divan pointed out that by virtue of the proviso which mandated that the amount of specified bank note tendered should not exceed the amount specified under the Foreign Exchange Management (Export and Import of Currency) Regulations, 2015, the grace period was extended only to people who had "taken money out of the country and brought it back in". "The condition imposed by the proviso excludes the operation of the notification to a person like the petitioner entirely. An Indian who travelled abroad, leaving his money in India, and returned after December 31, 2016, is kept out of the purview of the benefit of any grace period. This is how the notification operates. That is why his application was rejected."

In response to Divan's complaint that not a single notification contemplated a situation like the petitioner's, the Bench assured the counsel that independent cases, after the verification of the genuineness of the claims, could be considered by the Reserve Bank under Sub-section (2) of Section 4 of the 2017 Act or by the Central Board under Sub-section (3) of Section 4. "If this power is not exercised by the Reserve Bank or the Central Board in a reasonable manner and they refuse to take into consideration relevant factors, in individual cases, we may hold that they ought to have," Justice Gavai said. However, Divan pointed out, "This court may intervene in individual cases, but given the vastness of our country and the circumstances, the Reserve Bank needs to take a broader approach. They should have a general circular for circumstances like this."

Divan also challenged the banknote demonetisation on the grounds that it amounted to a deprivation of property without the authority of the law and that it did not pass the constitutional muster of Article 14. Justice Gavai wondered whether these questions would survive once the court directed the Reserve Bank to exercise its power in the manner suggested, to consider the applications of people, who for legitimate reasons were unable to exchange the old currency notes within the prescribed time. "If I receive substantial relief, then this issue may, in a sense, not arise," Divan conceded. However, he quickly added that it was important to "recognise the constitutional issue" because it "elevated the bounden duties" of the Reserve Bank and the Central Government. "This is not a critique of the policy. This is only to indicate that if such power is left untrammelled and unguided, it can lead to massive and unmitigated consequences for the lives of the citizens," the senior counsel also said.

The sentiments expressed by Divan were also echoed in Advocate Prashant Bhushan's brief interjection. He was appearing on behalf of a bereaved wife who sought to exchange her husband's savings, which she discovered only after the expiry of the window for exchanging old notes. "There would be many such people who cannot come to this court. The Prime Minister said that the window would be open till the end of March, in his address to the nation. This sudden extinguishing of the window, or even fixing of such an arbitrary deadline which prevents genuine people from using or exchanging their hard-earned money, is wrong," Bhushan told the Constitution Bench.