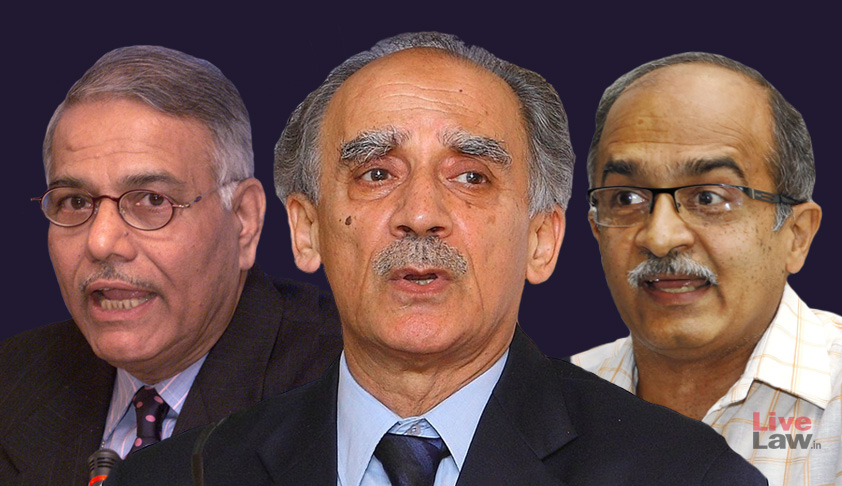 The Rafale controversy in Supreme Court is far from over, as the original petitioners have now filed a petition seeking perjury complaint against officials who allegedly misled the Court by submitting false and incomplete information in the sealed cover note submitted to the Court.The petition is based on the information contained in the recently submitted report of the Comptroller and...

The Rafale controversy in Supreme Court is far from over, as the original petitioners have now filed a petition seeking perjury complaint against officials who allegedly misled the Court by submitting false and incomplete information in the sealed cover note submitted to the Court.

The petition is based on the information contained in the recently submitted report of the Comptroller and Auditor General(CAG), and also reports in The Hindu and The Caravan.

The petition has been filed by Yashwant Sinha, Arun Shourie and Prashant Bhushan, who were the petitioners in the PIL seeking probe into the alleged corruption and irregularities in the 2016 deal for procurement of 36 aircraft from the French company Dassault Aviation.

It states that the government had submitted an unsigned note in sealed cover in the Supreme Court, without the support of any affidavit, with 'misleading information'.

Referring to the 'correction petition', Sinha and others state "government's act of stating untruth to Hon'ble Court in a sealed cover on 'pricing' and thereafter it's scandalous application have lowered sanctity of judicial proceedings".

They also point out that the Government's note made a reference to negotiations between Dassault Aviation and Mukesh Ambani-owned Reliance Industries in 2012, after the acceptance of bid under the 2007 Request For Proposal under the UPA era. However, note "mischievously" concealed the fact that Reliance Industries was owned by Mukesh Ambani, so as to confuse the Court. This confusion made the Court think that Reliance Industries was the parent company of  Reliance Aerostructure Ltd(RAL), the Anil Ambani owned company which is at the centre of controversy. This led the Court to ignore the fact that 2014-incorporated RAL landed the offset contract of Dassault, as the Court was under the mistaken impression that its parent company was anyways holding negotiations with Dassault since 2012.

According to the petitioners, the Government's submission that the entire negotiations were handled by the Indian Negotiating Team is discredited by the revelation made by The Hindu that Prime Minister's Office(PMO) held "parallel negotiations" with the French side, much to the objections of some of the officials of the Ministry of Defence. That the PMO intervened in the negotiations stands admitted by the statements of the then Defence Minister Mohan Parikkar, the petition states.

"Note suppressed unauthorised Parallel Negotiations against the Conduct of Business Rules and against the mandate of Defence Procurement Procedures (DPP) conducted by PMO bypassing Ministry of Defence & INT. Paras 47 to 59 of DPP, 2013, state that negotiations on all aspects are to be done by INT"

"Government's note suppresses that Ministry of Defence vide note dated 24.11.2015 objected to "parallel negotiations" being conducted by officers in the PMO and stated that such negotiations 'weakened the negotiating position of MoD and Indian Negotiating Team'"

The finding of the Court that negotiations by Indian Negotiating Team(INT) arrived at better terms relating to "price, delivery and maintenance", is based on erroneous and incomplete facts, say the petitioners. Referring to the dissent of three officials of the INT, which was reported in "The Hindu", they submit that the interventions by the PMO led to the dilution of the several important clauses in the deal, like waiver of sovereign guarantee, non-insistence of payment in escrow account and incorporation of arbitration at Geneva as means of dispute resolution.

"Objections of domain experts within INT, raise the question as to how report of INT "indicated better terms and conditions arrived at as a result of negotiation compared to 126 MMRCA case" which may have been used to mislead the Hon'ble Court, more so given apprehensions of INT experts and Ministry of Defence that parallel negotiations were being conducted and attempts were made to manipulate INT report", the petition points out.

Also, the Court's finding that "broadly, the process was followed" does not stand against the information published by "The Hindu" and "The Caravan" regarding irregularities in the fixation of benchmark prices. "The note suppresses that Ministries/Officers were concerned that the way this agreement was structured, it did not meet the minimum requirements of an IGA and was IGA in nomenclature only", the petitioners submit.

"That the Hon'ble Court has been misled into rendering it's judgement on the basis of false evidence and suppression of crucial pertinent information by the government in the course of judicial proceedings", submit the petitioners. They seek a probe to find out the officials responsible for making the 'note', and registration of perjury complaint in exercise of powers under Section 340 read with 195 of the Code of Criminal Procedure.