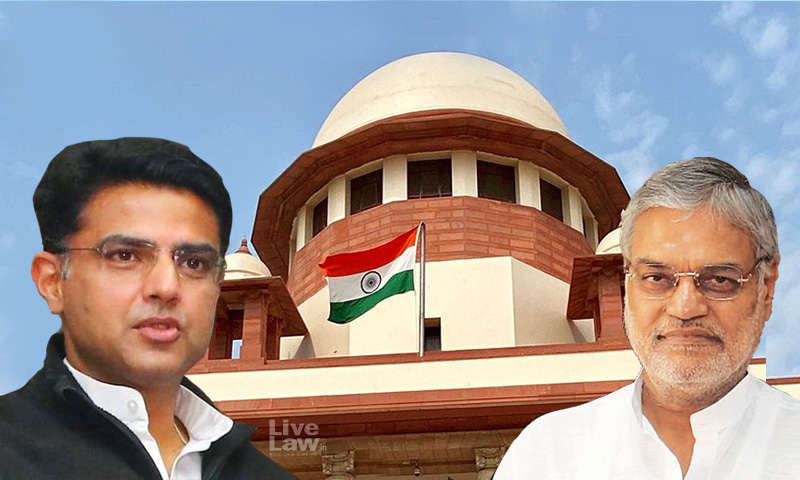 The Speaker of Rajasthan Legislative Assembly has approached the Supreme Court against the July 21 order of the Rajasthan High Court requesting the Speaker to defer the decision on disqualification proceedings pending against rebel Congress MLAs led by Sachin Pilot, till July 24. Filed through Advocate Sunil Fernandes, the plea contends that the disqualification proceedings before...

The Speaker of Rajasthan Legislative Assembly has approached the Supreme Court against the July 21 order of the Rajasthan High Court requesting the Speaker to defer the decision on disqualification proceedings pending against rebel Congress MLAs led by Sachin Pilot, till July 24.

Filed through Advocate Sunil Fernandes, the plea contends that the disqualification proceedings before the Speaker under the Tenth Schedule are "proceedings of the Legislature" and as such cannot be interfered with by the Courts.

The plea states that the impugned order is an "affront" to the law laid down by the Supreme Court in Kihoto Hollohan v. Zachillhu, (1992) Supp (2) SCC 651.

"In view of the limited scope of judicial review that is available on account of the finality clause in Paragraph 6 and also having regard to the constitutional intendment and the status of the repository of the adjudicatory power i.e. Speaker/Chairman, judicial review cannot be available at a stage prior to the making of a decision by the Speaker/Chairman and a quia timet action would not be permissible. Nor would interference be permissible at an interlocutory stage of the proceedings," the Supreme Court had held in this case.

The Speaker has submitted that he had merely issued a notice to Pilot and other MLAs, inviting their comments on the matter. Such a notice is not the final determination or decision on disqualification but only a commencement of the proceedings, he contends.

"If the final decision of the speaker is amenable to judicial review on limited ground, it is inconceivable that the notice dated 14.07.2020 calling for comments on the disqualification is subject to judicial review. Article 212 clearly bars the challenge," the plea asserts.

"It is submitted that merely because the Respondents seek to challenge the constitutional Validity of Para 2(1)(a), the same cannot be a ground for constricting the power of the Speaker to even call for reply in the disqualification proceedings of which he is the master till the final decision is rendered. Moreover, it is to be pointed out that the Speaker is the persona designata under the Constitution, who has exclusive, non-transferable, and non-delegable powers and authority to adjudicate on the issues of disqualification…

It was on July 14 that the Speaker, Dr C P Joshi, served the notices on the 19 dissident MLAs, including Pilot, amid their rebellion against Chief Minister, Ashok Gehlot. They were initially given time till 1 PM, July 17 to submit the replies. Meanwhile, the 19 MLAs approached the High Court on July 16, challenging the Speaker's action. The Court started hearing the matter on Friday, and in view of the pendency of the proceedings, the Speaker had extended the time for reply till 5.30 pm on July 21.

Yesterday, a division bench comprising Chief Justice Indrajit Mahanty and Justice Prakash Gupta of the Rajasthan High Court had reserved verdict on the petition filed by the rebel Congress MLAs led by Sachin Pilot challenging the notices issuing by the Speaker to initiate disqualification proceedings. It intimated that the verdict will be delivered on July 24.

The Court had 'requested' the Speaker to defer the decision on disqualification proceedings, by extending the time for filing reply till the Court delivers the verdict.