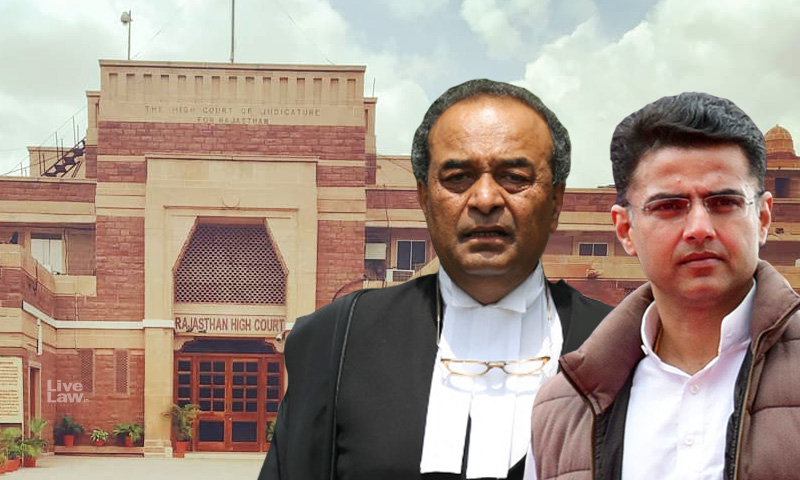 The notices issued by the Speaker of Rajasthan Legislative Assembly to initiate disqualification proceedings against 19 dissident Congress MLAs led by Sachin Pilot are vitiated by "mala fides", submitted Senior Advocate Mukul Rohatgi in the Rajasthan High Court on Tuesday."Speaker's actions reek of mala fides", said Rohatgi, while making rejoinder submissions for the petitioners before a...

The notices issued by the Speaker of Rajasthan Legislative Assembly to initiate disqualification proceedings against 19 dissident Congress MLAs led by Sachin Pilot are vitiated by "mala fides", submitted Senior Advocate Mukul Rohatgi in the Rajasthan High Court on Tuesday.

He cited the following facts to buttress his point :

Refuting the submissions of Dr. AM Singhvi (for Speaker) that the violation of the legislative rules will not render the Speaker's decision void, Rohatgi submitted:

"Legislative rules of Assembly derive their validity from Constitution, they are not subordinate. They state that on receiving complaint Speaker should examine it and prima facie satisfaction is recorded before notice. All these were thrown out of ring. These is nothing on record to show this was done".

"The Speaker was acting with "undue haste". The Speaker has not given any satisfactory explanation before the Court about his actions", he added.

Rohatgi started his submissions by saying that the Constitution Bench judgment in Kihoto Hollohan vs Zachillhu - which upheld the Tenth Schedule -  cannot be construed as ousting the jurisdiction of the High Court completely at the Speaker's pre-decision stage.

He repeatedly emphasized that Kihoto judgment was rendered in the context of political defections, amid the recurring phenomena of "aya ram, gaya ram". It was in that backdrop that the Supreme Court said that the Courts should refrain from interference at the Speaker's pre-decision stage.

That injunction is not applicable in the instant case, where there is no defection or crossing over. Mere expression of criticism against party chief cannot be regarded as defection, he said.

"Imagine a member of ruling party in a select committee of Parliament. Select Committees often criticize government. In case of such a criticism by select committee, can that party member be regarded as having given up membership?", Rohatgi said, citing a hypothetical example.

On this premise, he reiterated that the injunctions in Kihoto were not attracted in the present case.  He further emphasized that the High Court has wide powers under Article 226 to the Constitution to reach out to injustice, and the self-imposed restrictions cannot fetter the exercise of Court's jurisdiction in cases of extraordinary injustice.

Show-cause notices can be challenged.

"It is not that the Court will shut its door when the challenge is against a show-cause notice", Rohatgi submitted.

A show-cause notice can be challenged on grounds of defect of jurisdiction, excess of jurisdiction, colourable exercise of power, mala fides, violation of principles of natural justice etc.

"I am challenging the show-cause notice on the above said facts. The facts of the complaint, even if assumed to be correct, does not make out a case under Para 2(1)(a) of the 10th Schedule", he added.

"There is a clear case of breach of principles of natural justice, especially when the consequences of the notice are drastic, not just the disqualification of members, but adverse impact on a functioning democracy", he submitted further.

Rohatgi then referred to the recent SC judgment in Keisham Meghachandra Singh(authored by J Nariman), which recommended that an independent tribunal should decide disqualification matters, as Speaker tends to be aligned with the political party.

He also referred to the dissenting judgments in Kihoto, which held that vesting the power with Speaker was counter-productive, as Speaker cannot be presumed to be neutral.

CJ Mohanty invites Rohatgi's attention to the technical objections raised by the Advocate General, that the amended writ petition has not been filed, defects have not been cured etc.#RajasthanPolitics #RajasthanPoliticalCrisis

Yesterday, Senior Advocate Harish Salve, also appearing for the petitioners, had submitted that expression of inner party dissent will not amount to voluntary giving up of party membership.

Earlier, the Court had heard Senior Advocates Dr. A M Singhvi for the Speaker, and Devadatt Kamat for the Congress Whip, Manoj Joshi.

While Singhvi argued against Court interfering before Speaker taking a decision, Kamat submitted that the petitioners should be construed to have voluntarily left the party from their conducts such as open statements against the government and the refusal to attend party meetings.

The bench started hearing the matter on Friday(July 17) afternoon.

The extended time for giving reply to the notices expires at 5.30 PM, today.

At the time of publication of this report, the bench was hearing the intervenors in the petition.