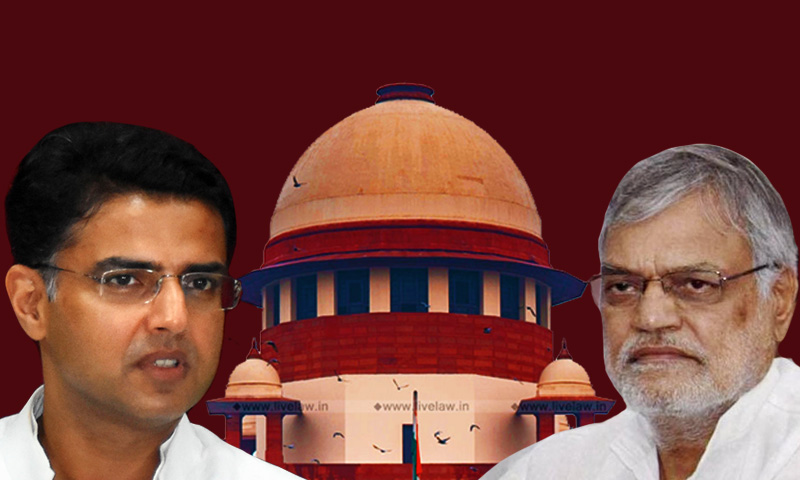 Even as the Rajasthan High Court is scheduled to pass orders tomorrow on the petition filed Sachin Pilot camp against the disqualification notices issued by Rajasthan Speaker, the Supreme Court on Thursday decided to hear in detail the Speaker's challenge against HC direction to extend the time for filing replies by the rebel Congress MLAs.A bench headed by Justice Arun Mishra said that...

Even as the Rajasthan High Court is scheduled to pass orders tomorrow on the petition filed Sachin Pilot camp against the disqualification notices issued by Rajasthan Speaker, the Supreme Court on Thursday decided to hear in detail the Speaker's challenge against HC direction to extend the time for filing replies by the rebel Congress MLAs.

A bench headed by Justice Arun Mishra said that the Special Leave Petition filed by the Speaker, C P Joshi, will be heard on Monday, observing that "serious questions related to democracy" are involved in the matter.

The bench however refused to accept the plea made by Senior Advocate Kapil Sibal, who appeared for the Speaker, to stay the HC proceedings, and instead said that it will clarify that the HC judgment will be subject to SC orders.

While reserving judgment on the petition filed by the 19 dissident Congress MLAs led by Sachin Pilot on July 21, the HC bench lead by Chief Justice Indrajit Mahanty had 'requested' the Speaker to extend the time for reply to the notices till the pronouncement of judgment on July 24. After making such a 'request', the Court added "we direct accordingly".

Challenging the 'direction' in the HC order, Senior Advocate Kapil Sibal submitted before the top court that the judgment of the constitution bench in Kihoto Hollohan prevented the interference of the Court at a stage prior to the decision of the Speaker.

"Judicial review is not permissible at a stage prior to the making of a decision by the speaker", Sibal quoted from the 1992-SC decision in Kihoto case.

During the hearing, Justice Arun Mishra asked if the hands of the Court are completely tied even if the Speaker disqualifies a person while a challenge is pending before the Court.

Sibal answered that the Court can interfere, provided a decision has been taken. In the instant case, the Speaker is yet to take such a decision, he said.

Sibal then submitted that in the recent decision of SC in Keisham Meghachandra Singh, Justice R F Nariman observed that Courts cannot give interim protection to a legislator during the pendency of disqualification proceedings.

The bench,also including Justices  B R Gavai and Krishna Murari, elaborately quizzed Senior Advocate Kapil Sibal as to whether refusal to attend party meetings can be a ground to issue disqualification notices.

"In this case, it seems party members cannot raise their own voice against their own party. Voice of dissent cannot be suppressed. They had all been elected by the people. Can they not express their dissent", he observed.

Though Sibal repeatedly tried to emphasize that the issue in the case was whether the High Court had power to issue a direction against the Speaker at an interim stage, the debates veered towards if refusal to attend party meetings could attract disqualification.

Sibal said that the rebel MLAs have not yet exercised their option of submitting replies before the Speaker.

Justice Mishra - So, if you don't attend a party meeting, it can be taken that they are going to be disqualified.

Sibal - We are not deciding that. Let the Speaker decide. And who is to say this will be a ground (not attending party meet). #RajasthanPolitics #Rajasthan

J. Mishra stresses that there are imp. questions related to democracy. "These are very serious issues. We want to hear it."

It was on July 14 that the Speaker, Dr C P Joshi, served the notices on the 19 dissident MLAs, including Pilot, amid their rebellion against Chief Minister, Ashok Gehlot. They were initially given time till 1 PM, July 17 to submit the replies. Meanwhile, the 19 MLAs approached the High Court on July 16, challenging the Speaker's action.

The High Court started hearing the matter on July 17, and in view of the pendency of the proceedings, the Speaker had extended the time for reply till 5.30 pm on July 21.

(With inputs from Sanya Talwar, Radhika Roy and Nilashish Chaudhary)