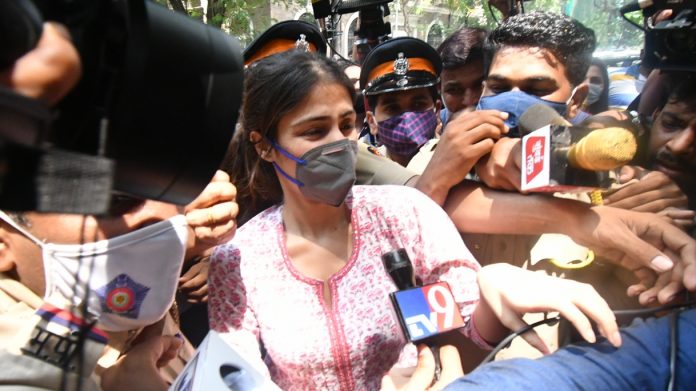 During hearing of PILs against the media trial of Sushant Singh Rajput Death Case on Thursday, the Central Government submitted before the Bombay High Court that if any person, including the Petitioners, are aggrieved by the media content, they may approach the concerned authorities. ASG Anil Singh appearing for the Government told a bench of CJ Dipankar Dutta and Justice GS...

During hearing of PILs against the media trial of Sushant Singh Rajput Death Case on Thursday, the Central Government submitted before the Bombay High Court that if any person, including the Petitioners, are aggrieved by the media content, they may approach the concerned authorities.

The submission was made in a PIL filed by Nilesh Navlakha (filmmaker/producer), Mahibub D. Shaikh (editor of a regional newspaper) and retired civil servant Subhash Chander Chaba, through Advocates Rajesh Inamdar and Shashwat Anand seeking directions for fair reporting by the media of the Sushant Singh Rajput case. Senior Advocate Devadatt Kamat appeared for Navlakha.

They sought a direction to the Centre to enforce its program code against the TV channels to stop the "media trial" in the case.

During the course of hearing, the Bench expressed surprise that there was no statutory body to govern the electronic media.

The Court was informed that though the Press Council of India is a statutory body under the Press Council Act, 1978, the NBA was a "self-regulatory" representative body of the news and current affairs channels.

The Petitioners submitted that many news channels that were a part of the NBA had been in violation of the Code of Ethics formulated by the body as part of the self-regulatory mechanism.

The Government informed the Court that a representation in this regard could be made to the News Broadcasting standards Authority (NBSA), which is set up by the NBA to consider complaints against or in respect of broadcasters.

At this juncture, Advocate Nisha Bhambhani, appearing for NBSA, informed the Court that it is an independent body that investigates complaints made to it directly by the aggrieved viewers.

On a query that the body may treat the present PILs as a representation, Bhambhani informed the Court that a separate complaint will have to be filed to the body.

Senior Advocate Milind Sathe, appearing for the eight ex-IPC officers who sought restraint on media from vilifying Mumbai Police, also made an objection to this proposition. He submitted that NBSA should be allowed to look into the matter at its level but the present PILs should be disposed of by the Court only as the NBSA is not state, and cannot be held accountable. Their decision would not be amenable to jurisdiction under Article 32 of the Constitution.

The Court took the Government's affidavit on record and adjourned the matter with hope that the media houses will uphold the spirit of its order dated September 3, whereby they were asked to carry on responsible reporting of the matter and desist from conducting media trial.

In the meanwhile, liberty is granted to NBSA to take action on complaints registered with it.

Liberty was also granted to the Petitioners in Nilesh Navlakha's PIL to file an additional affidavit, indicating instances of biased reporting after passing of the order dated September 3.

An impleadment application was also moved by the Petitioners to add actress Rhea Chakraborty, who is presently in Judicial Custody. The same was declined by the Court stating that is sees no reason to implead her.

The Petitioners had also sought to implead Enforcement Directorate (ED) and Narcotics Control Bureau (NCB), as they are also investigating the actress for money laundering and drug abuse respectively. Further, they sought to add media platforms— ABP News, INDIA TV and News Nation, for biased reporting and allegedly running the #arrestrhea campaign on Twitter.

The Court has permitted to implead these parties along with other concerned media channels.

During previous hearing, held on September 3, the High Court said it urges and expects the media to show restraint while reporting the developments in the case. The bench also said that the media should not report in a manner which hampers the ongoing investigation in the matter.

It had decided to consider the further reliefs sought by the petitioners after hearing the CBI, which is handling the investigation in the case.

In the PIL filed by ex-IPS officers seeking to restrain media from publishing any content that may jeopardize the reputation of Mumbai police, Senior Advocate Milind Sathe had submitted that they were not concerned with the accused or the victim; but they were aggrieved by vilification of Mumbai Police.

Referring to the order passed by the Supreme Court on August 19 to hand over the investigation to the CBI, Sathe submitted that the top court had not found any fault with the procedure adopted by the Mumbai police, and that the CBI probe was ordered in the peculiar circumstances of the case where the states of Bihar and Maharasthra were making allegations against each other.