'Do Not Give Sops', SC Observes On Delhi Govt Proposal For Free Metro Rides For Women 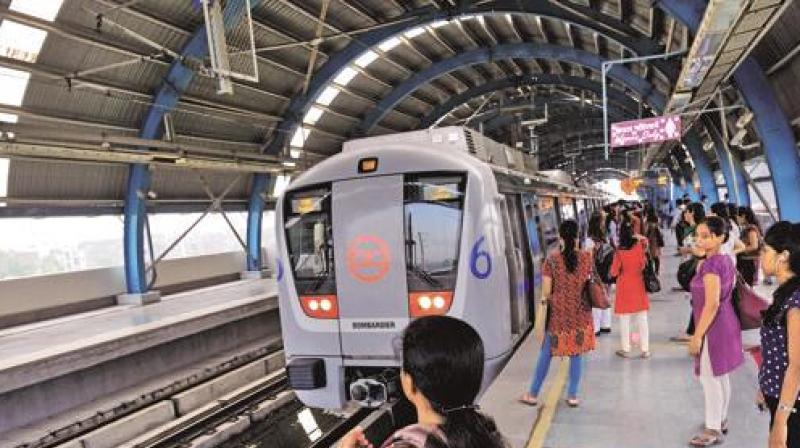 x
"If you will allow people to travel for free, then the Delhi metro may go into loss", the bench made oral observations.

The Delhi government's ambitious proposal to make metro travel free for women came under sharp criticism from the Supreme Court on Friday which questioned it for giving "freebies" and "sops" saying it might lead the Delhi Metro Rail Corporation (DMRC) to losses. The Delhi government should refrain from giving freebies from "public money", the apex court said and warned that it...

The Delhi government's ambitious proposal to make metro travel free for women came under sharp criticism from the Supreme Court on Friday which questioned it for giving "freebies" and "sops" saying it might lead the Delhi Metro Rail Corporation (DMRC) to losses.

The Delhi government should refrain from giving freebies from "public money", the apex court said and warned that it would stop them from doing so as courts are not "powerless".

"If you will allow people to travel for free, then the Delhi metro may go into loss. If you will give freebies, we will stop you. You are fighting for a cause here and you want them to incur loss. Do not give sops, it is public money," a bench of Justices Arun Mishra and Deepak Gupta told the lawyer appearing for Delhi government.

"Why you want to destroy the Delhi metro," the bench said, adding, "Can you give sops and say that Union of India should bear the cost".

Delhi Chief Minister Arvind Kejriwal said in June that his government proposed to make metro and bus travel free for women in the national capital and the plan would be implemented within two-three months.

The move by Delhi government came ahead of the Assembly election scheduled early next year.

During the hearing, the top court said the Delhi government should not channelise its funds in this way.

"What you handle is public money and public trust," the bench said, adding, "Do not think that courts are powerless".

However, the counsel appearing for Delhi government said the proposal has not been implemented yet.

The apex court dealt with three issues related to Phase-IV of Delhi metro -- bearing of operational loss, repayment of Japan International Cooperation Agency (JICA) loan in case of default and sharing of land cost -- which are yet to be resolved between the Centre and Delhi government.

The bench said that operational loss, if any, in the 103.94 km long Phase-IV of the Delhi Metro project would be borne by the Delhi government as it is a mode of conveyance in the national capital.

"The GNCTD (Government of National Capital Territory of Delhi) is bound to ensure that financial health of DMRC is maintained properly and no steps are taken so that it may run into loss," the bench said.

It asked the authorities concerned to ensure that no delay is caused in the Phase-IV metro project and the total land cost of Rs 2,447.19 crore is released forthwith.

The bench directed the Centre and Delhi government to work out the modalities and release the amount of land cost within three weeks from today.

The 103.94 km long phase-IV of Delhi metro will consist of six corridors -- Aerocity to Tughlakabad; Inderlok to Indraprastha; Lajpat Nagar to Saket G Block; Mukundpur to Maujpur; Janakpuri West to R K Ashram and Rithala to Bawana and Narela.

The Ministry of Housing and Urban Affairs had on March 9 this year approved the 61.66 km, three priority corridors -- Aerocity to Tughlakabad, R K Ashram to Janakpuri (west) and Mukundpur to Maujpur -- at a cost of Rs 24,948.65 crore.

Regarding the remaining three corridors of phase-IV, the bench on Friday said that it would hear the issue on September 23.

During the arguments, Delhi government's counsel told the bench that since the Centre and Delhi government are 50 per cent each shareholders in the special purpose vehicle for metro, the land cost should be borne by both of them in 50-50 ratio.

The counsel said that in earlier phases of DMRC, there was equal sharing of land cost between the Centre and Delhi government.

He said the Centre has come out with metro policy in 2017 as per which they are saying that they would not share the land cost.

When the counsel referred to the issue of repayment of JICA's soft loan in case of default, the bench said, "Once you are giving sops and free facilities, the metro cannot bear this cost".

"You will make the travel free in metro and want the Union of India to bear the cost?," the bench said.

He said the Centre came up with metro policy in 2017 and other states are covered under it.

"Transport is a state subject and Union of India is helping them," Nadkarni said, adding if Centre would give any special concession to Delhi then other states, where metro projects are going on, might also demand the same.

The bench told Nadkarni that keeping in mind the special status of Delhi being the national capital, the Centre should resolve the issues so that the project is not delayed.

When Nadkarni said that the court could direct the senior officers of the concerned departments of both the Centre and Delhi government to hold meeting and resolve the pending issues, the bench said, "No meeting now. It is order day. We cannot wait like this".

The apex court had on July 12 ordered that phase-IV of metro, which is estimated to add around 18.6 lakh riders per day, be implemented forthwith.

The issue of public transport had cropped up before the court as it was hearing a matter relating to air pollution in Delhi-National Capital Region.