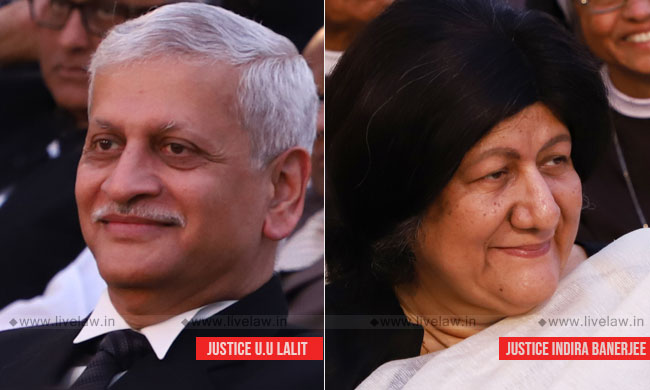 Dismissing the review petitions filed by University Grants Commission and Central Government, the Supreme Court today confirmed its decision that reservations in teaching posts in Universities are to be applied by taking subject/discipline as the unit, instead of the university.The review petitions were filed against the January 22 order of the bench of Justices U U Lalit and...

Dismissing the review petitions filed by University Grants Commission and Central Government, the Supreme Court today confirmed its decision that reservations in teaching posts in Universities are to be applied by taking subject/discipline as the unit, instead of the university.

The review petitions were filed against the January 22 order of the bench of Justices U U Lalit and Indira Banerjee whereby the Centre's Special Leave Petition against a 2017 judgment of Allahabad High Court was dismissed.

"We have gone through the review petition and do not find any error apparent on record to justify interference in review jurisdiction", said the order passed by Justices Lalit and Banerjee in chambers today. The order also stated that the grounds urged in the review petition were considered while dismissing the SLP.

On April 7, 2017  the Allahabad High Court in the case Vivekanand Tiwari v Union of India quashed clauses No.6(c) and 8 (a)(v) of the UGC Guidelines dated 25.08.2006, which prescribed the manner of applying reservations for SC/ST/OBC in teaching posts. As per Clause 6(c), all posts under a University had to be grouped together for the purposes of reservation. It forbid the practise of creating department-wise cadre. Clause 8(a)(v) directed the application of 40-point or 100-point roster to the total number of posts in a cadre, as per the judgment in R K Sabharwal v State of Punjab. Similarity of pay-scale was the determinative factor for determining the cadre, according to this clause.

These clauses were quashed by the HC bench of Justices Vikram Nath and Daya Shankar Tripathi, holding that they were in "direct conflict and in violation of the law laid down by the Apex Court and different High Courts consistently from 1990 till date". The bench referred to ten judgments of Supreme Court and other High Courts which held that reservation is to be applied department-wise or subject-wise treating it as a 'Unit' and not the University as a 'Unit'. The SC precedents Dr. Suresh Chandra Verma Vs. The Chancellor Nagpur University, State of U.P. Vs. Dr. Dina Nath Shukla, State of U.P. Vs. M. C. Chatopadhyay, State of Karnataka Vs. K. Govindappa, were mainly referred by the High Court.

Tracing the reason behind subject-wise quota, the bench observed :

"An Assistant Professor in subject 'A' cannot be an applicant for direct appointment as Associate Professor or Professor in subject 'B', 'C' or 'D'. He can only apply for the post in the subject 'A'. The seniority for becoming Head of the Department would be of the teachers in the same subject. There is no interse competition between the teachers in the same level of different subjects as all posts of higher level from entry level are by way of selection. There is no such provision in the teaching cadre in the Universities of promotion being granted on the basis of seniority irrespective of the department or the subject. Their competition is with candidates of their subject/department and not of different subjects".

"Merely because Assistant Professor, Reader, Associate Professor and Professor of each subject or the department are placed in the same pay-scale but their services are neither transferable nor they are in competition with each other. It is for this reason also that clubbing of the posts for the same level treating the University as a 'Unit' would be completely unworkable and impractical. It would be violative of Article 14 and 16 of the Constitution".

While allowing the petition, the High Court also made certain observations on the need to revisit the policy of applying reservations in teaching posts, based on the remarks in Indira Sawhney and Nagaraj judgments.

Last October, a five judges' bench of the Allahabad High Court upheld the correctness of the judgment in Dr.Vishwajeet Singh v State of UP, which held that reservation and roster for lecturer post had to be applied subject wise treating the college to be a 'unit'.

Applying subject wise quota in lecturer posts will reduce the scope of reservation. For departments with single posts, reservation will not be applicable.  Also, the time taken for the roster turn arising for reserved categories could be longer in case of subject-wise quota. If reservation is applied taking university as the unity, posts of professors across different departments were clubbed together, and there was a better chance of positions being set apart for SCs, STs, and OBCs.