'She Is Not Part Of Drug Dealers', Bombay HC Says Granting Bail to Rhea Chakraborty In NDPS Case [Read Order] 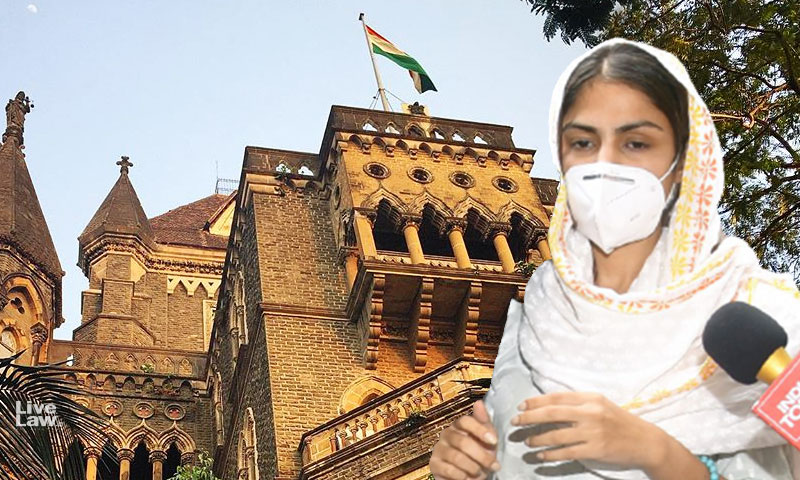 Demolishing the claim of the Narcotics Control Bureau(NCB) that actor Rhea Chakraborty was an active member of a drug syndicate, the Bombay High Court on Wednesday observed that she was not a part of drug dealers"She is not part of drug dealers. She has not forwarded the drugs allegedly procured by her to somebody else to earn monetary or other benefits", observed Justice Sarang V Kotwal,...

Demolishing the claim of the Narcotics Control Bureau(NCB) that actor Rhea Chakraborty was an active member of a drug syndicate, the Bombay High Court on Wednesday observed that she was not a part of drug dealers

"She is not part of drug dealers. She has not forwarded the drugs allegedly procured by her to somebody else to earn monetary or other benefits", observed Justice Sarang V Kotwal, while granting her bail after a month of custody in the case registered by the NCB for allegedly procuring drugs to her former partner and late actor Sushant Singh Rajput.

While arresting her on September 8, the NCB had called her "an active member of drug syndicate connected with drug supplies".

The High Court observed that there are reasonable grounds for believing that Rhea was not guilty of any offence punishable under Section 27A of the Narcotic Drugs and Psychotropic Substances Act (NDPS Act) or any offence involving commercial quantity.

Section 27A of the Act relates to the offence of "financing illicit trade" and "harbouring" of a person engaged in such trade. This is a serious offence, punishable with a minimum of ten years imprisonment, and is mentioned as one of the offences under Section 37 which deals with rigours of grant of bail.

The Court observed that mere giving money to another would not mean "financing illicit trade".

"...simply providing money for a particular transaction or other transactions will not be financing of that activity. Financing will have to be interpreted to mean to provide funds for either making that particular activity operational or for sustaining it. It is the financial support which directly or indirectly is cause of existence of such illicit traffic. The word "financing" would necessarily refer to some activities involving illegal trade or business.

The allegations against the Applicant of spending money in procuring drugs for Sushant Singh Rajput will not, therefore, mean that she had financed illicit traffic", the HC observed.

The Court also rubbished the allegation that Rhea had "harboured" Sushant Singh Rajput.

"In the present case, no criminal case or FIR was pending against Sushant Singh Rajput. He was residing in his own house and was spending for his own food and other necessities. At that point of time, he had no apprehension of any arrest. Therefore, the act on the part of the Applicant cannot be stretched to attract the allegation of harbouring Sushant Singh Rajput", Justice Kotwal observed in this regard.

The Court also commented on the anomaly of invoking Section 27A against Rhea as the alleged beneficiary of the transaction, Sushant, is liable for a smaller punishment only. That too, he can avoid by volunteering for rehabilitation under Section 64A.

"By applying the interpretation of Section 27A by NCB, if some other person like a friend or a relative pays money for such consumption, then the person who actually consumes the drug can be punished only upto one year or can get immunity under Section 64-A of NDPS Act; but the person who gives money for purchasing that drug faces the prospect of spending twenty years in jail. This is highly disproportionate and would be extremely unreasonable", the HC observed.

After holding that the offence of Section 27A will not be applicable against Rhea, the Court proceeded to consider the next applicable provision, Section 8(c). In this regard, the Court noted that the NCB has not recovered any contraband from her and that there was no allegation of involvement of commercial quantities.

"The investigation did not reveal any recovery either from the Applicant or from the house of Sushant Singh Rajput. It is their own case that the drugs were already consumed and hence there was no recovery. In that case, there is nothing at this stage to show that the Applicant had committed any offence involving commercial quantity of contraband. The material at the highest shows that she has committed an offence involving contraband, but, the crucial element of incurring rigours of Section 37 in respect of commercial quantity is missing", the Court added in this context.

The Court also remarked that celebrities and role models do not incur any special liability or enjoy any special privilege before the Court of law.

The Court, however, rejected the bail application of Rhea's brother Showik Chakraborty.

Samuel Miranda and Dipesh Sawant, the domestic aides of Sushant, arrested for obtaining drugs for their master, were also granted bail by the Court today.

Rhea is also accused of abetting the suicide of Sushant Singh Rajput, which is being investigated by the Central Bureau of Investigation(CBI) on the orders of the Supreme Court.