'In Arnab Goswami's Case, Your Lordships Interfered When Bail Was Pending; I'll Rely On That' : Sibal During Siddique Kappan Case 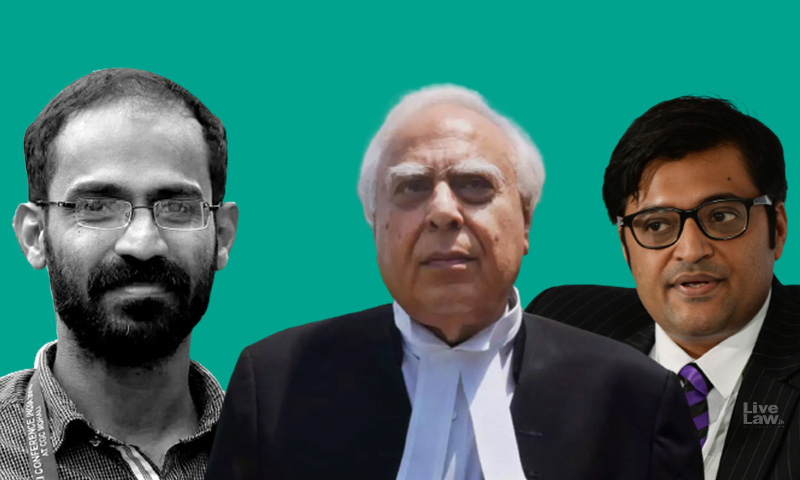 Siddique Kappan Case: Senior Advocate Kapil Sibal submitted before the Supreme Court on Wednesday that he will rely on the order in the Arnab Goswami's case to seek the release of Kerala journalist Siddique Kappan from custody.Sibal highlighted that Republic TV anchor Goswami was granted relief by the Supreme Court even when his bail application was pending before the Sessions Court.He...

Siddique Kappan Case:  Senior Advocate Kapil Sibal submitted before the Supreme Court on Wednesday that he will rely on the order in the Arnab Goswami's case to seek the release of Kerala journalist Siddique Kappan from custody.

Sibal highlighted that Republic TV anchor Goswami was granted relief by the Supreme Court even when his bail application was pending before the Sessions Court.

He was making submissions before a bench comprising Chief Justice of India SA Bobde, Justices V Ramasubramanian and A S Bopanna on behalf of the Kerala Union of Working Journalists(KUWJ). The KUWJ has filed a habeas corpus petition before the SC under Article 32 seeking the release of Kappan, who was arrested by the UP Police on October 5 while he was proceeding to report the Hathras crime.

Referring to the Arnab Goswami case, Sibal submitted that he court has a duty to ascertain if the FIR allegations constitute an offence to justify the custody of the accused.

"In Arnab Goswami's case, your lordships have interfered when the bail application was pending. I will rely on that", Sibal submitted.

The senior counsel was referring to the recent order passed by a bench of Justices D Y Chandrachud and Indira Banerjee granting interim bail to Arnab Goswami in an abetment to suicide case registered by Maharashtra police.

In the judgment passed by the bench on November 26 giving reasons for ordering the release of Goswami, the bench stressed that Courts are duty bound to uphold the personal liberty of citizens.

"Courts must be alive to the need to safeguard the public interest in ensuring that the due enforcement of criminal law is not obstructed. The fair investigation of crime is an aid to it. Equally it is the duty of courts across the spectrum – the district judiciary, the High Courts and the Supreme Court – to ensure that the criminal law does not become a weapon for the selective harassment of citizens. Courts should be alive to both ends of the spectrum – the need to ensure the proper enforcement of criminal law on the one hand and the need, on the other, of ensuring that the law does not become a ruse for targeted harassment".

"The consequence for those who suffer incarceration are serious. Common citizens without the means or resources to move the High Courts or this Court languish as undertrials. Courts must be alive to the situation as it prevails on the ground – in the jails and police stations where human dignity has no protector.... The remedy of bail is a solemn expression of humaneness in the justice system. We have given expression to our anguish in the case where the citizen has approached the Court", the SC observed in the judgment delivered on Goswami's petition.

Goswmi had approached the Supreme Court against the refusal of the Bombay High Court to grant interim bail in the writ petition filed by him challenging his arrest and custody. The High Court declined interim relief saying that alternate remedy of regular bail was available.

The Supreme Court criticized this approach of the High Court and said that it amounted to 'abdication of duty'. The bench stated that our courts must ensure that they continue to remain the first line of defense against the deprivation of the liberty of citizens.

Sibal, who had appeared for the State of Maharashtra in Arnab Goswami's case, had mentioned the arrest of Siddique Kappan in passing during the hearing.

"A Kerala journalist was arrested by UP police when he was going to Hathras to report. We came to this Court under Article 32. The Court said go to lower court. The petition was posted after four weeks. Such things are also happening", Sibal had told the bench headed by Justice Chandrachud.

Kappan, a freelance journalist reporting for Malayalam portals, was arrested by the UP police on October 5 along with three others in an FIR registered for alleged criminal conspiracy to create societal unrest in the wake of Hathras incident. The stringent provisions of anti-terror legislation Unlawful Activities Prevention Act(UAPA) and sedition were invoked against Kappan and others. A local court in Mathura remanded them to custody.

The UP Government has filed a counter-affidavit alleging that Kappan was using the garb of journalism to create social unrest in the wake of Hathras incident. It was also alleged that Kappan has links with unlawful organizations.