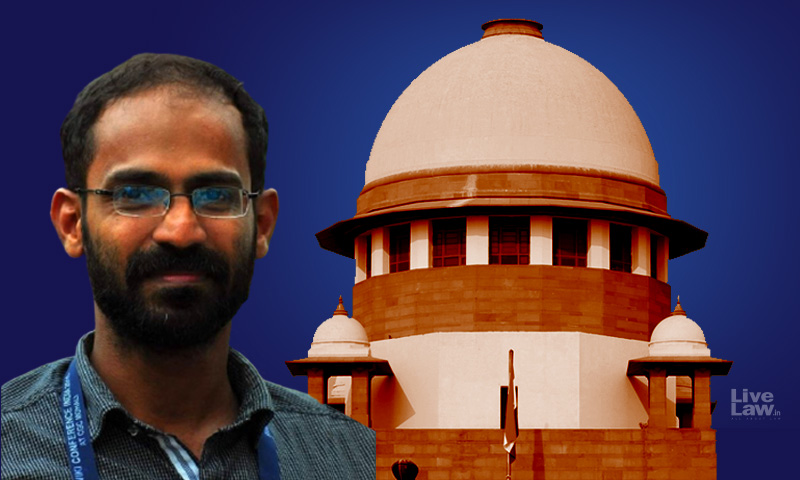 A three Judge Bench headed by Chief Justice NV Ramana today sought medical records of Kerala based Journalist Siddique Kappan, who is allegedly "chained like an animal" at a Hospital in Mathura where he is undergoing treatment for Covid-19."Let us first see the reports. Please produce medical reports tomorrow. If possible, circulate it today," the CJI told Solicitor General Tushar...

A three Judge Bench headed by Chief Justice NV Ramana today sought medical records of Kerala based Journalist Siddique Kappan, who is allegedly "chained like an animal" at a Hospital in Mathura where he is undergoing treatment for Covid-19.

During the VC hearing, the Bench sought ten minutes to take up the matter as it was facing technical glitches. However, the SG insisted that the matter be posted tomorrow before a Special Bench.

The CJI however expressed inclination to hear the matter himself. "We will hear this matter. Don't know why you want to restrict your prayers. We are hearing this." the CJI said.

The Bench was hearing a letter addressed to it by Kappan's wife, Raihanth Kappan through Advocate Wills Mathews, seeking immediate intervention to release Kappan from Mathura Medical College to Mathura Jail as his "life is in extreme danger".

The Bench also heard a petition filed by the Kerala Union of Working Journalists (KUWJ) seeking Kappan's transfer to All India Institute of Medical Sciences (AIIMS) or Safdarjung Hospital, Delhi, in view of medical emergency.

During the hearing, Mathews submitted that he has no objection to adjournment but the Respondents must be directed to provide Kappan's medical reports. Thereafter, the Bench directed the Solicitor General to present medical records of Siddique Kappan tomorrow.

He argued that since charge sheet has been filed and Kappan is in lawful custody, a petition for habeas corpus will not be maintainable. The SG insisted that Kappan may file a regular bail application instead.

"One person is in jail. Chargesheet is filed under UAPA. Here some journalist association has filed this. Court has consistently held that once this is the case, a habeas corpus petition will not lie," SG submitted.

The letter written by Kappn's wife states that Kappan (who has recently tested Positive for COVID-19) is chained like an animal in a cot of the Medical College Hospital, Mathura, without mobility, and that he is not able to take food, go to toilet for the last more than 4 days, and is very critical.

However, during the hearing, the SG denied the allegation stating that "There are no chains".

The letter also stated that the Writ of Habeas Corpus (seeking Kappan's release) petition filed on 06th October 2020 which was supposed to be disposed of on 09th March 2021 had not been disposed of despite it being listed it more than 7 times.

Thus, it sought immediate steps/ necessary orders are passed to release Kappan from the Medical college Hospital back to the Mathura Jail as an interim relief, till the disposal of the mentioning application filed on 22nd April 2021.

It may be noted that Citing medical emergency, the Kerala Union of Working Journalists (KUWJ) has moved the Supreme Court seeking the transfer of Kerala Journalist Siddique Kappan to All India Institute of Medical Sciences (AIIMS) or Safdarjung Hospital, Delhi.

Siddique Kappan (along with three others) was arrested by the Uttar Pradesh Police while he was proceeding to cover the Hathras case of rape and murder of a 19-year-old Dalit woman, later on, they were booked under provisions of the Unlawful Activities (Prevention) Act (UAPA) and charges of sedition were also slapped against them.

Recently, the Kerala Union of Working Journalists(KUWJ) had filed an additional rejoinder in the Supreme Court refuting the allegations made by the Uttar Pradesh Government against journalist Siddique Kappan, who has been under custody since his arrest by the UP Police on October 5 last year when he was proceeding to report the Hathras crime.

The KUWJ has denied that Kappan has any connection with the Popular Front of India (PFI). In this regard, the KUWJ states that the UP Government has taken inconsistent stances in two affidavits.

Earlier this month, 8 people allegedly linked to Popular Front of India, including its students' wing leader K A Rauf Sherif and Kerala journalist Siddique Kappan, were charge-sheeted on Saturday by Uttar Pradesh police's Special Task Force in a court here for sedition, criminal conspiracy, funding of terror activities and other offences.