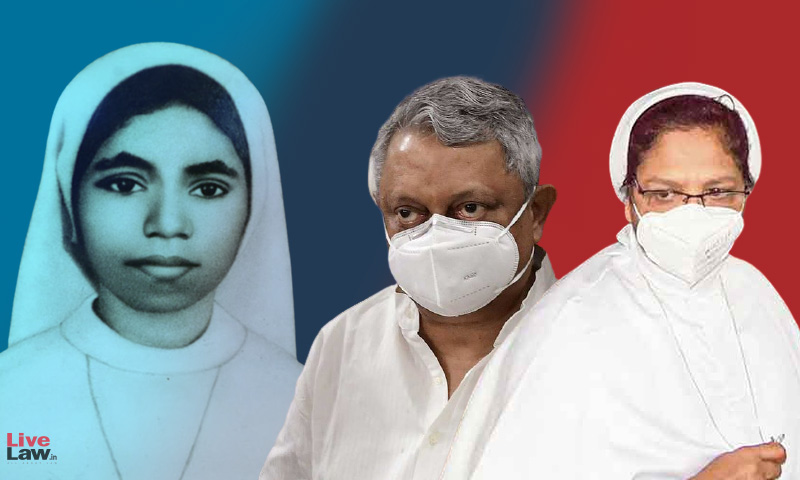 A special CBI Court at Thiruvananthapuram on Wednesday sentenced to life imprisonment Father Thomas M Kottoor and Sister Sephy, a priest and a nun of the Catholic church respectively, for the murder of Sister Abhaya 28 years ago.Special CBI Judge K Sanilkumar found Kottoor and Sephy guilty of murder accepting the case of the Central Bureau of Investigation that Sister Abhaya was murdered...

A special CBI Court at Thiruvananthapuram on Wednesday sentenced to life imprisonment Father Thomas M Kottoor and Sister Sephy, a priest and a nun of the Catholic church respectively, for the murder of Sister Abhaya 28 years ago.

Special CBI Judge K Sanilkumar found Kottoor and Sephy guilty of murder accepting the case of the Central Bureau of Investigation that Sister Abhaya was murdered by the convicts after she happened to witness their intimate exchanges inside the convent. She was hit on her head with a blunt weapon and her body was thrown into the convent well.

The case was totally based on circumstantial evidence as there were no eyewitnesses for the crime.

The judgment delivered by Special CBI Judge K Sanil Kumar has listed 17 circumstances to reach a guilty verdict. They are :

1. There were 6 ante-mortem injuries on the body of Sister Abhaya as clear from the evidence of PW33 Dr Radhakrishnan(police surgeon) along with the postmortem certificate.

2. Based on the evidence of PW7 Varghese Chacko(photographer who took the photos of the body as per the instructions of Kottatyam West Police), it has been proved that there were nail mark injuries on either side of the neck of the person of Sister Abhaya.

3.The evidence of PW33 and PW31, in the light of the antemortem injuries as noted in Ext.P62 post-mortem report, proves that injury Nos. 1, 2 and 6 possess a definite characteristic of being caused to the person of Sister Abhaya before her body was submerged.

4.The nail mark injuries as proved through PW7(photographer) are injuries caused to the person of Sister Abhaya before her body was submerged.

5.It is proved that there was a fracture on the skull of Sister Abhaya through PW33, Dr. Radhakrishnan.

6. From the evidence of PW31(Dr Kanthaswami, a medical expert) and PW33 it is proved that the death of Sister Abhaya was due to head injury and drowning.

7.It is proved that the deceased Sister Abhaya was a very smart, pious, honest, simple, perseverant and punctilious girl meticulous in all respects. She was leading a happy and altruistic life, and also proved that it was simply impossible for her to have ended her life on her own, through the evidence of PWs1,9,11 ,25,32 andPW14(Sister Anupama,Nisha Rani,Achamma,Sister Elicitta, Sister Sherly, who were inmates of the convent and Professor Thressiamma, Abhaya's lecturer, respectively).

8.Through the evidence of PW31 and PW33, it has been proved that Sister Abhaya died due to a combination of head injury and drowning.

9. Through the evidence of PW31, and PW33, and in the light of the medical evidence, and the evidence of PWs 4, 7, 11, and 14(MM Thomas, Varghese Chacko, Achamma and Professor Thressiamma), it is proved that the death of Sister Abhaya was homicide.

10.It is proved that there were strange and abnormal disturbances in the kitchen work area and the kitchen wash area of the St. Pius X Convent Hostel in the morning of 27/03/1992 through the evidence of PW4,PW11, and PW24(MM Thomas- who reached the kitchen on the morning of the crime, Achamma-the convent cook, and Jomon Puthenpurackal).

MM Thomas went to the kitchen and found a hand axe lying near a corner of the kitchen. He found that the door of the refrigerator was open. A bottle of water was lying on the floor near the refrigerator; a nun's veil was there in between the two leaves of the back door of the kitchen.A pair of slippers was there, one of the pair was located in one place and the other was located in another place.

Achamma, the convent cook, deposed that Fathers were in the habit of visiting the St. Pius X Convent Hostel and that she would on such occasions be asked to cook sumptuous dishes to be served to the priests. She also deposed that convent was guarded by dogs. The Court noted that no one deposed about hearing any barking noise on the fateful night. The baffling question why the dogs did not bark on the night of 26/27-3-1992 finds the answer in the explanation of PW11 that the dogs do not bark on seeing the regular visitors to the St.Pius XConvent Hostel, the court said.

12. The presence of A1(Kottoor) in the St. Pius X Convent Hostel in the night of 26/27-03-1992 has been proved through the evidence of PW3(Raju @ Adacka Raju, who was in the convent premises during the night for theft).

Raju told the court that while he was sitting atop a tree to scale down the convent wall, he saw two men climbing down the staircase at the rear side of the building. He identified one of them as accused Kottoor. He could not identify the second person, which led to the discharge of the second accused Father Jose Poothrikkayil. Raju's testimony turned out to be vital in linking Kottoor to the crime. Raju also told the court that the crime branch had arrested him soon after the crime and had tortured him forcing him to own up the crime. He also said that he was offered crores of rupees to confess that he had killed Abahya during a theft attempt.

13. It is proved through the evidence of PW6 that Kottoor admitted his relationship with Sephy.

PW6 is a person named Kalarcode Venugopal who said that Kottoor had confessed to him about the crime. Venugopal told the court that he came in contact with Father Kottoor on account of his interest in the topic of narco-analysis. Kottor encouraged Venugopalan to file a public interest litigation challenging the legality of narco-analysis test. In the course of the discussion, Kottoor is stated to have revealed that he had committed a wrong and he had all the weaknesses of an ordinary human being. Venugopalan claimed that Kottoor confessed that he had an illicit relationship with Sister Sephy and expressed regret over the murder of Abhaya by saying 'something which ought not to have happened, happened'.

14.It is proved that Kottoor threatened PW24(Jomon Puthenpurackal), Convener,Action Council, near Kumarakam Hotel while PW24returning after taking part in a protest demonstration organized by the Action Council, after the incident through the evidence of PW24.

15.It has been proved that A3(Sister Sephy) admitted her previous sexual activities through the evidence of PW19(Dr Lalithambika Karunakaran), PW29(Dr P Rema) andExts.P48, P79 and P80(Medico Legal Certificates after the medical examination of Sister Sephy).

16.It is proved that Sister Sephy utilized medical intervention(hymenoplasty surgery) to shape artificially her body as that of a virgin, through the evidence of PW19, PW29 along with Exts.P48, P79 and P80.

Given the nature of the head injury suffered by Sister Abhaya, it is sufficient to cause death, as deposed by PW31, Dr. Kandaswamy; the only inference possible here is that Sister Abhaya was attacked by the accused with intention to kill her. The inference drawn is not mere speculation or surmise, but it is the sole factual inference which could possibly be drawn from the proved set of facts, the Court said.

The Court observed that the location of the murder is exceedingly significant.

"It is a Convent, a place from which male presence is completely and unequivocally banned. The murder is that of a nun, a Bride of Christ", the Court said.

Since the first accused Kottoor could not give a sufficient explanation for his presence inside the convent during the wee hours, it demonstrates the "nefarious conduct" of both Kottoor and Sephy.

"From proved circumstance Nos (4) and (5), it is inexorable to infer that A1 entered the ground floor of the convent building with the help of A3 to carry out their sexual activities and on the witnessing of the same by Sister Abhaya, she was attacked with a blunt weapon", the Court observed.

From these circumstances, Special CBI Judge observed in the order :

"The evidence on record is more than sufficient to hold that the unbroken catena of circumstances is so complete that it cumulatively points towards the guilt of the accused, leading to the conclusion which is inconsistent with the innocence of the accused, and the only possibility is that it is the accused and the accused alone who have inflicted a fatal blow on the rear side and middle of the head of Sister Abhaya with a blunt weapon, like hand axe, at about 4.30 a.m. on 27.03.1992 on the ground floor of the St.Pius X Convent, Kottayam,to commit murder, knowing that the injuries were sufficient to cause her death, caused the evidence of the same to disappear, by dumping Sister Abhaya in to the well near the room of A3, in order to make it appear that the said injuries were sustained during the fall and that Sister Abhaya had committed suicide, in order to screen themselves from legal punishment"

The Court noted that there were 'systematic and organized efforts' to subvert the prosecution case. The Court observed that two officials of Kerala Police, SP KT Michael and DySP K Samuel, indulged in destruction of material objects in the case.

The witnesses connected to the congregation including the inmates of the St. Pius X Convent Hostel en masse turned hostile to the prosecution without rhyme or reason.

One of the witnesses, the poorly paid convent cook Achamma, conducted expensive litigation in the Supreme Court challenging the validity of narco-analysis test.

The Court described it as a "fascinatingly bizarre" fact as she did not deny the prosecution suggestion that Senior Advocate Harish Salve, "arguably India's greatest living lawyer", appeared for her. She conceded that her litigation had been financed by the convent and that she was not aware of its nitty-gritty.

The prosecution brought to the attention of the court that Kottorr was the Secretary of the Bishop of Kottayam Diocese(Knanaya).

"Hence, it is reasonable to suppose that A1(Kottoor) had at his control the immense resources of the diocese in terms of money and material and could command the obedience of priests, nuns, and laymen", the court observed.

Judges moved and case stood still, the court remarks about inordinate delay in the case

"The 'sacred cows' of shadowy doubts and marginal mistakes,processual or other, cannot deter the Court from punishing crime where it has been sensibly and substantially brought home".

The CBI judge also quoted from another SC precedent as follows :

"Justice would fail not only by unjust conviction of the innocent but also by acquittal of the guilty for unjustified failure to produce available evidence".

The judgment noted that the case has been hanging fire for 28 years.

"The Judges moved and the case stood still", the Court remarked modifying a quote of Lord Macaulay.

The CBI prosecutor was M Navas. In the trial, Father Thomas Kottoor was represented by Senior Advocate B Raman Pillai, assisted by Advocates Chacko Simon and B Sivadas.