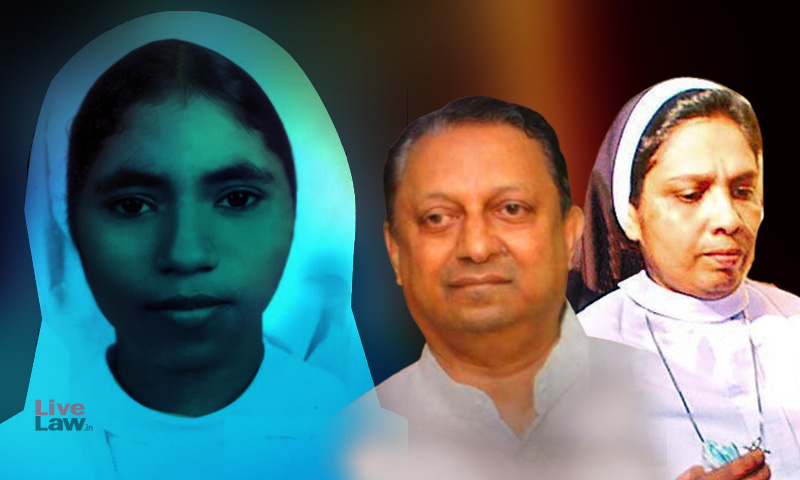 A special CBI Court at Thiruvananthapuram on Wednesday sentenced to life imprisonment Father Thomas M Kottoor and Sister Sephy, a priest and a nun of the Catholic church respectively, for the murder of Sister Abhaya 28 years ago.The culprits were also imposed a fine of Rupees 5 lakh each under Section 302 of the Indian Penal Code. Kottoor was also imposed an additional sentence of life...

A special CBI Court at Thiruvananthapuram on Wednesday sentenced to life imprisonment Father Thomas M Kottoor and Sister Sephy, a priest and a nun of the Catholic church respectively, for the murder of Sister Abhaya 28 years ago.

The convicts were also awarded 7 years imprisonment and a fine of Rupees 50,000 each for the offence under Section 201 IPC(destruction of evidence). The sentences of imprisonment given to the convicts will run concurrently.

The prosecution pleaded for maximum sentence of death penalty for the culprits by arguing that case belonged to "rarest of rarest category". It was argued that the murder was gruesome as Kottoor and Sephy were duty bound to protect Abhaya, being her teacher and hostel warden respectively.

The defence lawyers pleaded for leniency in sentence. It was submitted that Kottoor, aged 71, was suffering from cancer and Sephy has aged parents to take care of.

Special CBI Judge K Sanilkumar had found Kottoor and Sephy guilty of murder yesterday accepting the case of the Central Bureau of Investigation that Sister Abhaya was murdered by the convicts after she happened to witness their intimate exchanges inside the convent.

Sister Abhaya, an 18 year old novice, was found dead inside the well of St.Pious Xth Convent at Kottayam on March 27, 1992.

Since the case had no eyewitnesses, it was founded wholly on circumstantial and forensic evidences. What proved vital in the case was the testimony of "Adakka" Raju, a thief who was in the convent premises on the fateful night of March 27, 1992 with the intention of stealing the copper wires from the lightning rod installed at the terrace. Raju told the court that while he was sitting atop a tree to scale down the convent wall, he saw two men climbing down the staircase at the rear side of the building. He identified one of them as accused Kottoor. He could not identify the second person.

Raju's testimony turned out to be vital in linking Kottoor to the crime. Raju also told the court that the crime branch had arrested him soon after the crime and had tortured him forcing him to own up the crime. He also said that he was offered crores of rupees to confess that he had killed Abahya during a theft attempt.

Though several key prosecution witnesses turned hostile during the trial, Raju stood firm in his testimony.

The second accused in the case, Father Poothrikkayil, was discharged from the case after the court found that there was no prima facie evidence to put him on trial.  Since Raju had not identified Poothrikkayil, the prosecution relied on the testimony of Chellamma Das, a watchman of the nearby building. Though Das said that he had seen Poothrikkayil scaling down the wall of the convent at night on three occasions, his testimony did not specify if he had seen the accused on the date of the crime. Therefore, the CBI Court held in 2018 that there was no evidence to hold that Poothrikkayil was present inside the convent on the date of the crime and discharged him. His discharge was upheld by the High Court and also the Supreme Court.

K T Micheal, a former officer of the Kerala police special branch, who was accused of destruction of evidence, was also discharged by the court last year.

Professor Thressiamma, a lecturer of BMC College, told the court about the post-crime conduct of the accused. She said that she had reached the convent on the morning of March 27, 1992, on hearing the news about Abhaya's death. According to her, the second accused(Poothrikkayil) did not exhibit any emotion and was moving around giving directions to the employees. It was stated by this witness that after the death of Abhaya,Kottoor and Poothrikkayil started keeping aloof from their colleagues. It was noticed that Kottoor maintained a grim face and was not at all pleasant. According to this witness, she had noticed that whenever the subject relating to the death of sister Abhaya came for discussion, the above accused used to leave the company and seemed to be not interested in the subject.

Another crucial evidence was the extra-judicial confession stated to have been made by Father Kottoor to a man named Kalarcode Venugopalan Nair. He told the court that he came in contact with Father Kottoor on account of his interest in the topic of narco-analysis. Kottor encouraged Venugopalan to file a public interest litigation challenging the legality of narco-analysis test. In the course of the discussion, Kottoor is stated to have revealed that he had committed a wrong and he had all the weaknesses of an ordinary human being. Venugopalan claimed that Kottoor confessed that he had illicit relationship with Sister Sephy. He also revealed that something that ought not have happened, had happened.

The prosecution also brought on record expert witnesses who informed the court that Sister Sephy had undergone hymonoplasty surgery to show that she was a virgin.

Case with several twists and turns

The local police and the crime branch of the Kerala Police initially closed the case as a suicide. After a lot of public outcry, the case was handed over to the CBI.

The CBI also could not make any headway in the case until 2008. Before that, different teams of the CBI had filed three closure reports in the case - in 1996, 1999 and 2005. However, the Chief Judicial Magistrate at Ernakulam refused to accept these closure reports and asked the agency to conduct further investigation.

On November 1, 2008, the High Court of Kerala directed the Kochi Unit of the CBI to take over the investigation. Soon after that, by November 19, 2008, the CBI arrested Father Thomas Kottoor, Sister Sephy and Father Jose Poothrikkayil.

In July 2009, the CBI filed a chargesheet arraying Father Thomas Kottoor, Sister Sephy and Father Jose Poothrukkayil as accused for offences of murder and destruction of evidence. As per the report, Sister Abhaya had accidentally intruded upon Sr. Sephy and the other two accused priests in a "compromising position". It was further alleged that Sr Sephy panicked and, on the spur of the moment, Sephy hit Abhaya with an axe meant for chopping firewood. After that, the accuseddumped Abhaya's body into the well.

In October this year, the High Court directed to expedite the trial by doing it on a day-to-day basis. A single bench of Justice V G Arun observed that it was "disheartening to note that criminal proceedings pertaining to a crime of 1992 is yet to attain finality, whether it be by reason of providence or design". The Court allowed cross-examination of witnesses through video conferencing mode considering the pandemic situation.

The accused were subjected to narco-analysis and brain mapping tests at the Forensic Science Laboratory, Bangalore.

Earlier this year, the High Court of Kerala ruled that the results of narco-analysis and brain mapping process done on the accused cannot be used in evidence.
A single bench of Justice Alexander Thomas observed:

"..even if it is assumed that the narco analysis tests were conducted on the basis of their consent, since the subject does not exercise conscious control over the responses during the administration of such tests, unless the prosecution agency satisfies the vital requirement that the information materials that subsequently discovered with the help of voluntary administration of test results can be admitted in evidence in accordance with Sec. 27 of the Evidence Act, etc., there is no question of letting any evidence in that area.