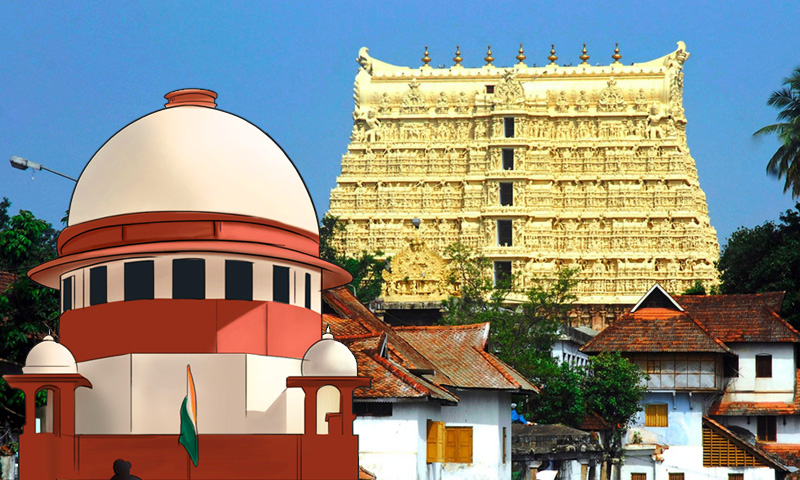 The Supreme Court on Monday upheld the rights of erstwhile royal family of Travancore in the administration of Sree Padmanabha Swamy temple at Thiruvananthapuram.

Death will not affect the rights of shebaitship of the family over the deity and they will survive as per custom, ruled the Court.

Powers of Ruler of Travancore delegated to Administrative Committee

The powers of the 'Ruler of Travancore' under Travancore Cochin Hindu Religious Institutions Act (TC Act) in the matter of the administration of the temple has been delegated to an Administrative Committee, as suggested by the family itself.

The family suggested the following composition :

The Court noted that this composition was "quite balanced" and was not "loaded in favour or against the appellants(family)", when compared to the scheme under the TC Act.

"As against the administration contemplated by Chapter III of Part I of the TC Act in the hands of the Ruler of Travancore in absolute terms, the course now suggested by the appellants is quite balanced", the Court observed.

The SC also approved the continuation of the interim committee headed by District Judge, Thiruvananthapuram to manage the affairs of the temple till the constitution of a new committee.

Notably, the top court has not expressed anything on the opening of the contentious "B Kallara"(Vault B), and has left it to be decided by the committee.

A bench led by Justice UU Lalit pronounced judgment in the appeals challenging a 2011 Kerala High Court judgment, which directed the Government to take over control of the Sree Padmanabhaswamy Temple, it's assets and management. The High Court bench comprising of Justices C.N. Ramachandran Nair and K. Surendra Mohan had directed the Government to open all Kallaras (Vaults), make inventory of the entire articles and create a Museum and exhibit all the treasures of the Temple for the public, devotees and the tourists to view the same which could be arranged on payment basis in the Temple premises itself.

"In our view, there is no purpose in keeping the treasures of the temple acquired by it in the course of several centuries as a mystery..", the HC had observed.

Senior advocate Gopal Subramanian was appointed as amicus curiae in the matter. Former CAG Vinod Rai was also appointed to audit the records including expenditures incurred for temple's upkeep.

In 2011, the inventory revealed an extravagant wealth of approximately Rupees 1 lakh crores, in the form of jewellery, idols, etc, following the opening of five "kallaras"(vaults).

The opening of B Kallara was however put on hold, following objections from the family that it will invite divine wrath.

(d) Shall take appropriate steps to return to the State the amounts expended by the State Government as catalogued in the Chart in paragraph No.44 hereinabove((Rs 11,70,11,000).

As per the instrument of accession between the princely state of Travancore & Cochin and the Government of India entered in 1949, the administration of the temple was vested with the "Ruler of Travancore".

After Marthanda Varma made a claim that the treasures of the Padmanabha Swamy Temple are the family properties of the erstwhile Royal Family of Travancore, several devotees approached Civil Courts in Trivandrum filing Suits for declaration and for injunction to restrain the Travancore family members for diverting the temple properties.

"Ruler" is not a status that could be acquired through succession, HC held

22/09/2011: The Court examined the interim report of the Expert Committee and issued further directions. The court also said that the issue relating to opening of Kallara 'B' shall be considered after substantial progress is made in regard to documentation, categorization, security, preservation, conservation, maintenance and storage relating to the contents in the other Kallaras.

(Story to be updated after receiving full copy of the judgment)