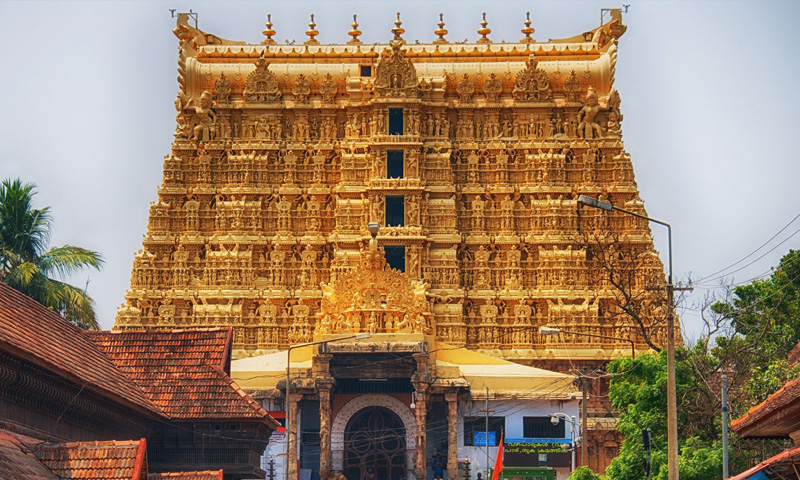 The Padmanabhaswamy temple is a Hindu temple located in Thiruvananthapuram, Kerala, the presiding deity of which is Padmanabhaswamy (Lord Vishnu) enshrined in the "Anantha Shayana" posture.As the Supreme Court is set to pronounce the judgment in the case relating to Padmanabha Swamy Temple administration dispute tomorrow, this piece intends to throw light on the history of the temple and...

The Padmanabhaswamy temple is a Hindu temple located in Thiruvananthapuram, Kerala, the presiding deity of which is Padmanabhaswamy (Lord Vishnu) enshrined in the "Anantha Shayana" posture.

As the Supreme Court is set to pronounce the judgment in the case relating to Padmanabha Swamy Temple administration dispute tomorrow, this piece intends to throw light on the history of the temple and the genesis of dispute over management of the temple.

Before under the direct control of Anizhal Thirunal Marthanda Varma, the then ruler who established modern Travancore state, the temple was under the management of 'Ettarayogam' (a group of eight and a half). The structure of Ettarayogam comprises of Seven potties, who are Brahmins ,one Nair Chieftain and the King. In the administration of the temple, the role of the king was very minimal. The Potties would control the temple and the "Ettuveetil pillamars" (the 8 Nair chieftains belonging to eight big families spread over in different villages of the State) ,would manage the properties of the temple. The historic accounts reveals that the king was always in daggers drawn with the potties and pillamars and the temple even remained closed for more than five years out of this dispute.

After the tenure of Marthanda Varma, based on the advice received from Colonel Monroe ,a British resident in Travancore, the properties of the temples were brought under the direct control of the state from the rulers of the royal family.

Agreement of Accession and TCHRI Act

Agreement of Accession signed between the two Princely States Cochin and Travancore represented by the kings with the Government of India as a party came into force with effect from 1.8.1949. As per the agreement, all the temples which were under the control and management of the erstwhile Princely States of Travancore and Cochin, after merger of the two Princely States went under the control of the Travancore and Cochin Devaswom Board. However, under the Agreement of Accession,9, the administration of the Sree Padmanabha Swamy Temple was "vested in trust" in the Ruler of Travancore. Later by operation of Section 18(2) of the TC Act, the management of the  Temple continued to be vested in Trust in the last Ruler of Travancore. The last Ruler of Travancore, until his death on 20.7.1991 continued to manage the Sree Padmanabhaswamy Temple by virtue of powers conferred on him under Section 18(2) of the TC Act

After Marthanda Varma made a claim regarding the treasures of the Padmanabha Swamy Temple are the family properties of the erstwhile Royal Family of Travancore, Several devotees approached Civil Courts in Trivandrum filing Suits for declaration and for injunction.

"Ruler" is not a status that could be acquired through succession

Directives to Government to Take Over Temple

The High Court bench(Justices C N Ramachandran Nair and K Surendra Mohan) then proceeded to consider what should be done to save the Temple and to protect the interest of the devotees and the public at large who have great faith in this Great Temple. In this regard, the bench issued the following directives:

i) There shall be a direction to the State Government to immediately take steps to constitute a body corporate or trust or other legal authority to take over control of the Sree Padmanabhaswamy Temple, it's assets and management and to run the same in accordance with all the traditions hitherto followed. This shall be done within a period of three months from now.

ii) There will be an order of injunction against the members of the erstwhile royal family against opening of any of the Kallaras or removing any of the articles from the Temple. However, they are free to use such of the articles required for rituals, ceremonies and regular poojas in the Temple until Temple is taken over by the Authority as stated above.

iii) There will be direction to the authority constituted by the Government to open all Kallaras, make inventory of the entire articles and create a Museum and exhibit all the treasures of the Temple for the public, devotees and the tourists to view the same which could be arranged on payment basis in the Temple premises itself. Uthradam Thirunal Marthanda Varma and the successors from the Royal Family should be permitted to participate in the rituals in the Temple like the Arattu Procession, which is symbolic of the presence of the "Padmanabhadasa" in the Festival.

iv) Considering the valuables and the treasures in the Temple, the Government should consider handing over security of the Temple to a team of Police or atleast provide Police assistance to the Temple security staff.

22/09/2011: The Court examined the interim report of the Expert Committee  and issued further directions.  The court also said that the issue relating to opening of Kallara 'B' shall be considered after substantial progress is made in regard to documentation, categorization, security, preservation, conservation, maintenance and storage relating to the contents in the other Kallaras.