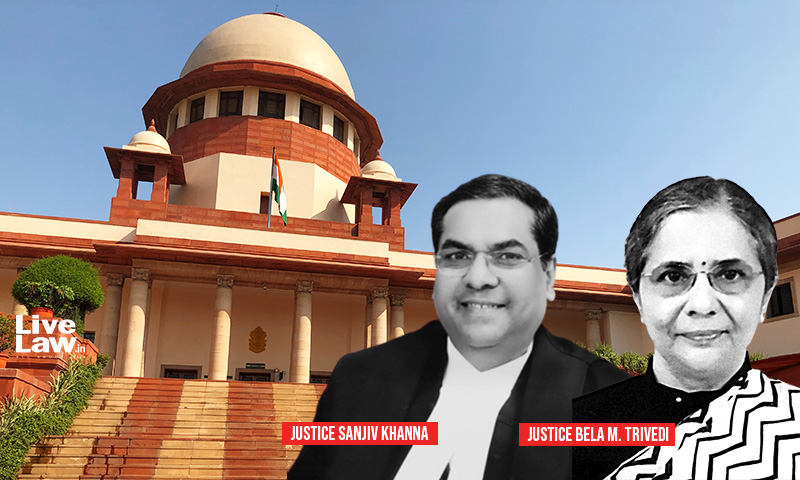 A Supreme Court bench comprising Justice Sanjiv Khanna and Justice Bela M Trivedi has delivered a split verdict in an appeal. The judges could not come to a consensus regarding whether the plaint in the instant case was liable to be rejected under Order VII Rule 11(d) of the Code of Civil Procedure as barred by limitation.While Justice Khanna upheld the views of the trial court as well as...

A Supreme Court bench comprising Justice Sanjiv Khanna and Justice Bela M Trivedi has delivered a split verdict in an appeal. The judges could not come to a consensus regarding whether the plaint in the instant case was liable to be rejected under Order VII Rule 11(d) of the Code of Civil Procedure as barred by limitation.

While Justice Khanna upheld the views of the trial court as well as the High Court that the plaint was liable to be rejected, Justice Trivedi differed by saying that the issue of limitation in this case was a mixed question of facts and law and hence required trial.

In view of the divergence in the bench, the matter has been referred to the Chief Justice for appropriate orders.

"In view of the difference of opinion expressed by two separate judgments, the Registry is directed to place the matter before Hon'ble the Chief Justice of India for appropriate orders/directions", the bench ordered.

The issue related to a civil suit filed in 2012 which essentially sought a declaration that a sale deed executed in 1969 was a sham document and was illegal, null and void.

In trial, a preliminary issue was framed as to whether the suit was time-barred and hence was liable to be rejected at the threshold under Order VII Rule 11(d).

The plaintiffs relied on Section 17 of the Limitation Act, which states that in case of fraud, the limitation will start running only after the discovery of the fraud. On an examination of the averments in the plaint, Justice Khanna noted that the plaintiffs had knowledge about the sale deed of 1969 even before 2008. The judge also noted that as per the law of pleadings, the plaintiffs have to make specific averments regarding fraud with particulars relating to dates.

"...it is apparent that the plaintiff was aware and had knowledge in October 2008 about execution and transfer of the ownership rights in favour of late Tej Kaur vide sale deed dated 23rd August 1969 executed by defendant No.3, Gurdev Singh Anand. Unadorned assertion in the plaint feigning ignorance as to the sale deed would not help, as in the facts as pleaded and accepted in the plaint, the plaintiff was required to state and indicate that ignorance was not due to failure to exercise reasonable diligence", Justice Khanna noted.

Justice Khanna added that "Section 17(1) does not assist a person who merely shuts his eyes in spite of circumstances requiring him to ascertain facts on which he would have discovered the fraud".

Holding that even going by the plaint itself, the suit was time-barred, Justice Khanna upheld the rejection of the plaint.

On the other hand, Justice Trivedi held that the question of applicability of Section 17 in the instant case was a mixed question of law and facts. Referring to a catena of precedents, Justice Trivedi observed that "whether the suit is barred by any law or not must be determined from the statements made in the plaint and it is not open to decide the issue on the basis of any other material including the written statement filed in the case".

"From the afore-stated legal position, it is absolutely clear that for invoking Order VII Rule 11 (d), and for the purpose of rejecting the plaint on the ground that the suit is barred by any law, only the averments made in the plaint have to be referred to and that the defence taken by the defendant in the written statement being wholly irrelevant, must not be considered", Justice Trivedi stated in her order.

The judge noted that the High Court had referred to statements in the written statement as well as certain legal notices issued by the plaintiffs to come to its conclusion.

"...the plaintiff had pleaded fraud committed against her and other defendants who were the legal representatives of Smt. Harbans Kaur. The Court at this juncture is not inclined to go into the merits of the issues involved in the suit. Suffice it to say that the Single Bench and the Division Bench have passed the impugned orders de hors the specific provisions of CPC and in utter disregard of the position of law settled by this Court", Justice Trivedi said. It was also held that the plea of limitation could not have been decided as a preliminary issue as it was not an "abstract question of law".

Therefore, Justice Trivedi ordered the restoration of the suit after setting aside the impugned judgments.