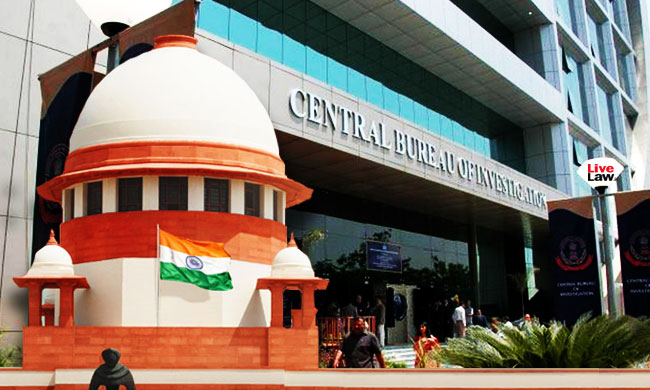 Supreme Court has on Monday sought response of the Central Bureau of Investigation in the plea filed challenging order of the Calcutta High Court whereby it allowed CBI to investigate a case pertaining to illegal mining and transportation of coal through Railways in West Bengal, without the State's consent. A division Bench of Justices Chandrachud and MR Shah has also issued notice to the...

Supreme Court has on Monday sought response of the Central Bureau of Investigation in the plea filed challenging order of the Calcutta High Court whereby it allowed CBI to investigate a case pertaining to illegal mining and transportation of coal through Railways in West Bengal, without the State's consent.

A division Bench of Justices Chandrachud and MR Shah has also issued notice to the Union of India and Superintendent of Police Anti- Corruption Branch along with CBI. The court however denied to grant interim protection from coercive steps to the petitioner.

Senior Advocate Mukul Rohatgi appearing for petitioner submitted before the Court that appeal before Division Bench were not eligible, and order wasn't appealable. Therefore the order passed is without jurisdiction.

"That is actually a grievance of the criminal lawyers. We have to come to your lordships every time", Submitted Senior Advocate Siddharth Dave.

On the Bench's inquiry whether the Order of single Judge was stayed, Rohatgi answered in the affirmative. He stated that their order was that CBI can do it only in Railway area, but railway area has not been defined.

Justice Shah: What was nature of proceedings before Single Judge.

Rohatgi: It was for quashing of FIR

Dr AM Singhvi appearing for state of West Bengal submitted that he supports the petitioner on the issue of law. He added that there is admittedly no consent for CBI investigation, and two years after withdrawal this plea has been filed. Railways being central subject, CBI will have jurisdiction.

Bench observes that in this case both parties are aggrieved.

The Bench observed that notice needs to be issued to CBI and the parties need to be heard.

"We will also have to consider the Appellate side rules of Calcutta High Court." Justice Shah stated.

"What is the HC's appellate rule for Calcutta?" Justice Chandrachud asked.

"No such rule that empowers appeal of criminal jurisdiction" Mukul Rohatgi answered.

Court observes that Sr Adv Rohatgi submitted that Order of single judge was not amenable for an intra court appeal in terms of letters patent of the High Court's position as has been clarified in various judgements of the Court.

Rohatgi also urged theCourt to grant petitioner protection from coercive steps claiming that it is a constitutional issue. He submitted that the petitioner has allegations for involvement in illegal coal mining. He argued that the allegations are politically motivated and issues will have to be gone into.

Bench: Nothing will happen to you in this time

Rohatgi: They'll arrest me tomorrow,I've been summoned by ED.I'm only seeking protection against coercive steps for two weeks.

The Bench however decided to not grant interim protection and hear the matter next Monday instead to hear both sides and pass orders.

A special leave petition has been filed before the Supreme Court against an order of the Calcutta High Court which allowed CBI to investigate a case pertaining to illegal mining and transportation of coal through Railways in West Bengal, without the State's consent.

It is the case of the Petitioner, Anup Majee, that the general consent given by the State of West Bengal to CBI under Section 6 of the Delhi Special Police Establishment Act, 1946 on August 2, 1989, was withdrawn vide a subsequent Notification dated November 16, 2018.

Thus, he argued that in view of the withdrawal of such consent by the State, the CBI had no authority to register an FIR or conduct investigation in the instant case.

"extension of powers and jurisdiction of the CBI to any area (including Railway areas) in a State, as granted by the Central Government under Section 5 of the Delhi Special Police Establishment Act, 1946, is subject to the consent of the concerned State Government as mandated under Section 6 of the DSPE Act."

The case pertains to illegal mining and transportation of coal through Railways in connivance with officers of the Eastern Coalfield Limited, Railways, C.I.S.F. and some other private persons including the writ petitioner (Anup Majee).

The Petitioner had impugned the FIR before a Single Bench of the Calcutta High Court which held that authority of the CBI to investigate into the allegations in a particular case within Railway areas remains unfettered by the withdrawal of consent by the State Government.

In an appeal preferred by CBI, a Division Bench of the High Court stayed the Single Judge's order and allowed CBI to investigate the case without any hindrance. It observed,

"Proper investigation cannot be carried out if the investigation in such cases is divided into parts, drawing lines on territories once the premier central agency is in the process of investigation."

In case during the pendency of the present appeals, the investigation being carried out by the CBI is hampered, the process of investigation at this stage will certainly be prejudiced, which will not be in the interest of justice as any delay in the process may be fatal…"

In the instant SLP, the Petitioner-accused has argued that the interim directions passed by the Division Bench of the High Court tantamount to grant of final relief as prayed for by the CBI, rendering the adjudication of the Writ Appeal a mere academic exercise.

1. Withdrawal of general consent by the State takes away CBI's authority to register an FIR or conduct investigation within its territory.

The Petitioner has argued that prior consent before registering the FIR by CBI is a mandatory requirement of law, and as such, in the absence of consent under Section 6 of the DSPE Act the registration of the FIR and the subsequent steps taken by the officers concerned being bad in law.

Reliance is placed upon M. Balakrishna Reddy v. Director, Centrak Bureau of Investigation, (2008) 4 SCC 409, whereby the Supreme Court had held that for exercise of jurisdiction by the CBI in a State (other than Union Territory or Railway Area), the consent of the State Government is mandatory.

2. The allegations in the FIR relate to coal mining in mine areas, which are beyond the Railway Areas and therefore, the conduct of investigation by the CBI is de hors the law.

"Once it is established that the primary offence is alleged to be committed within the State of West Bengal, the CBI cannot use a fringe element of the said offence, namely, that said illegally excavated coal is transported from West Bengal to other parts of the country, as a benchmark to usurp jurisdiction and its rights to investigate into the offence."

3. The term "Railway Areas" is not defined under the DSPE Act and therefore the statute to that extent being vague, the CBI cannot be given unlimited and unbridled powers to investigate into cases where no territorial jurisdiction is defined. He suggests that the definition of "Railways" under the Railways Act, 1989 must be considered as a reference point for ascertaining the area covered by the Railways.

4. The Petitioner has lastly contended that the impugned order is prejudicial to his Freedom of Life and Liberty as guaranteed under Article 21 of the Constitution of India as he is made subject to the rigors of an on-going investigation which is devoid of any legal sanctity.