'Liberty Of Person Is First Thing To Be Seen. If You Want To Withdraw Do It At This Stage' : Supreme Court To CBI In Narada Case 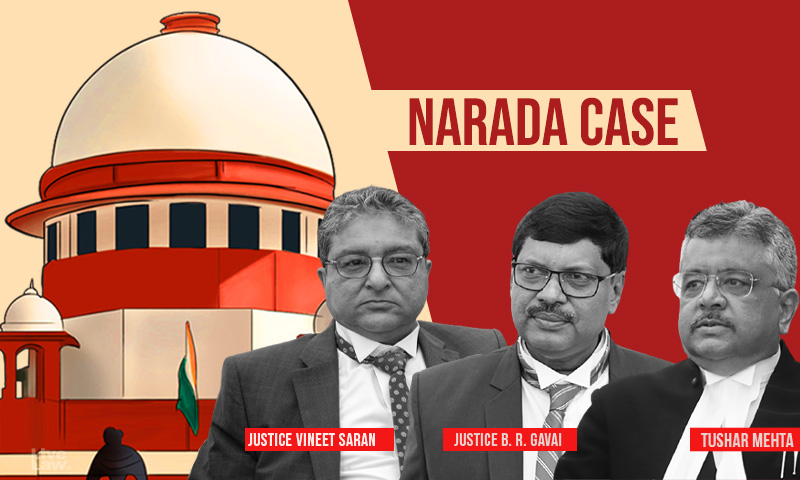 Taking a dim view of the appeal filed by the CBI against the Calcutta High Court order allowing house-arrest of four Trinamool leaders in the Narada case, the Supreme Court on Tuesday suggested to the Solicitor General Tushar Mehta to withdraw the case.A vacation bench comprising Justices Vineet Saran and BR Gavai repeatedly told during the hearing that the "liberty of a person is the first...

Taking a dim view of the appeal filed by the CBI against the Calcutta High Court order allowing house-arrest of four Trinamool leaders in the Narada case, the Supreme Court on Tuesday suggested to the Solicitor General Tushar Mehta to withdraw the case.

A vacation bench comprising Justices Vineet Saran and BR Gavai repeatedly told during the hearing that the "liberty of a person is the first thing to be seen" and that the issue of personal liberty cannot be mixed with other issues such as Chief Minister's dharna and public protests against arrests by CBI.

The Solicitor General started the arguments today by giving a factual background of the case, relating to the dharna held by the Chief Minister of West Bengal before the CBI office and the protest led by Law Minister in front of the court complex to protest the arrest of four leaders. The SG called them a "well-designed and orchestrated attempt" to prevent the CBI from performing its functions.

The bench then pointed out that the CBI's petition said that they were challenging the order of Acting Chief Justice Rajesh Bindal (which had rejected interim bail to the four leaders).

The Solicitor General clarified that it was a mistake and the intent was to challenge the order passed by Justice Arijit Banerjee (which held that the accused should be granted interim-bail).

Justice BR Gavai asked the Solicitor General whether the May 17 order of the High Court division bench which stayed the bail was passed after issuing notice to the accused parties. The SG replied that there was no notice

"Liberty which is granted to a citizen can be deprived if you don't give notice to him", Justice Gavai said.

The SG replied that the extraordinary circumstances of the case warranted the stay order.

"We will make it very clear that we don't appreciate the dharnas. But, if CM or Law Minister takes law into their hands, should the accused suffer because of it?You can proceed against those persons who have taken law into their hands", Justice Gavai observed.

The judge also remarked that action may be taken against those taking law.

The bench also pointed out that the accused persons are under surveillance of the CBI even while they are under house-arrest. Therefore, the bench asked what exactly was the grievance of the CBI.

"We want to know what do you want from us?What is the relief you are asking?", the bench asked the SG.

"We have seen special benches been assigned to deal with liberty. But this is the first time a special bench is assigned to take away liberty", Justice Gavai commented in reference to the extra-ordinary sitting of Calcutta High Court on May 17.

The bench also clarified that it was not supporting the Chief Minister or the Law Minister of the state and was only on the point of personal liberty.

The Solicitor General said that the case was not a mere issue of bail and involved larger issues related to rule of law.

"This happens in this State periodically. The Chief Minister barges into the police station to help the accused!", the SG said.

The bench commented that the 5-judge bench of the Calcutta High Court is anyway examining the issue.

"If these facts do not move your lordship's conscience, I don't have anything to add", an exasperated Solicitor General said at one point.

The top law officer of the Union also commented that "this is too serious an issue to be thrown out on the ground that some notice was not issued".

After the adverse queries from the bench, the Solicitor General requested for an adjournment till Friday.

"But this is at your request that this matter is taken today", Justice Saran commented.

"I have been a judge for 18 years. As per normal practice, if one of the judges of the bench differ on bail, bail is granted till larger bench decides", the bench said.

Justice Gavai also asked why should the High Court be deprived of an opportunity of hearing the matter. After all a 5-judge bench is hearing, the judge said.

"The numerical strength does not mean anything", the SG commented.

The bench reminded the Solicitor General that the High Court and the Supreme Court are on the same pedestal as far as protection of constitutional rights is concerned.

"I get the undercurrent of this question. I wish to answer only legally", the SG responded.

Solicitor General :I get the undercurrent of this question. I wish to answer only legally.#NaradaCase #SC https://t.co/kZ8GR6Pjgl

The SG again repeated that the issue was not just of bail but was of the unprecedented acts of hooliganism at the instance of state ministers.

"We do not want to mix the issue of liberty of citizen with the illegal acts of politicians", Justice Gavai said.

"We have to see if bail can be granted or not. With regard to other issues, other remedies are there. In a bail matter, how far can a person go ? Liberty of a person is the first thing to be seen. Conduct of others is to be seen in relevant proceedings", Justice Saran asked.

After this exchange, the bench suggested that the CBI withdraws the matter from Supreme Court and agitate the issues before the 5-judge bench of the Calcutta High Court.

The Solicitor General then requested for a pass-over of the case to take instructions.

Accordingly, the bench passed over the matter to be taken up at the end of the board.

Complete minute-by-minute live updates from the hearing may be read here.