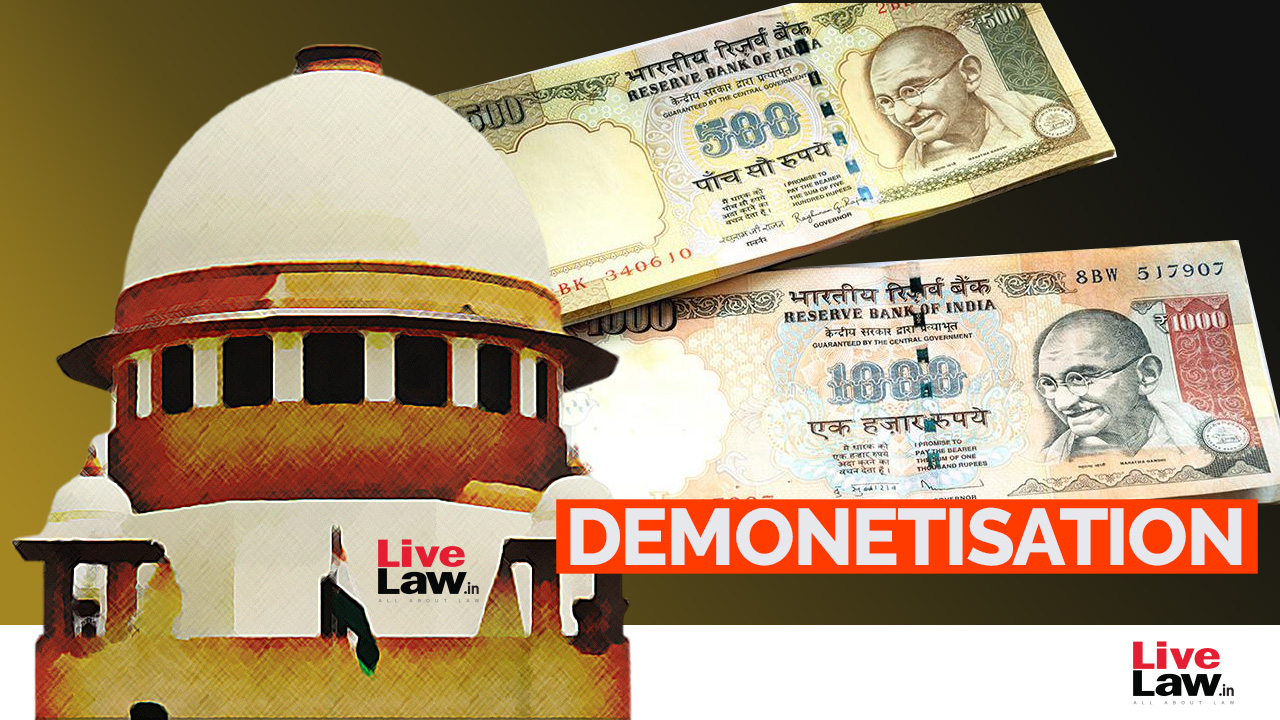 A Constitution Bench of the Supreme Court on Thursday continued hearing a batch of 58 petitions challenging the controversial decision of the Union Government to demonetise currency notes of Rs 500 and Rs 1000, effectively leading to 86% of the currency being pulled out of the economy in one fell swoop. The five-judge Bench comprising Justices S. Abdul Nazeer, B.R. Gavai, A.S. Bopanna, V. Ramasubramanian, and B.V. Nagarathna, is considering, inter alia, the legality of the November 8 circular that set the policy in motion, six years after it sent shockwaves through the nation.

Senior Advocate P. Chidambaram, appearing for some of the petitioners, prefaced his submissions by giving a brief conspectus of the importance of currency in an economy. He explained, "Since currency is a store of value and a medium of exchange, it is widely preferred to any other system. Data has shown that even in advanced countries in 2016, currency represented an overwhelming proportion of the different means of payment. In times of distress too, people fall back on currency and hold more currency." To illustrate how cash usage has become more robust despite the government's claim that the high-value banknote demonetisation in 2016 made way for a "cash-less" economy, Chidambaram informed the Bench that the total value of the currency in circulation increased from Rs 17.97 lakh crores in 2016, at the time of demonetisation, to Rs 32.18 lakh crores today. "There is more cash now. And this number will continue to grow. That is economic logic. As the gross domestic product grows, more people have more income, there will be a requirement of more income," he stated, "Simply by the fiat of demonetisation, the government withdrew 86.4% of the currency. But that does not mean people did not require that currency.".

The right to issue currency is not given to the executive government but conferred on an independent authority which alone can decide the value and the amount of currency in circulation as required by the people, the senior counsel said. He explained, "This is because an executive government can starve people of cash and cripple their daily activities by putting enough cash in circulation. Therefore, this crucial determination must be made only by the Reserve Bank of India." "That is why, anything to do with currency, must have emanated from the Reserve Bank of India. The power to demonetise should only be exercised on the RBI's recommendation," Chidambaram added. The fact that it was the Central Government that had issued a "virtual command", which was then "merely and meekly" accepted by the Reserve Bank, demonstrated a "perverse reversal of procedure", the senior counsel contended. He strenuously argued that the process followed was "deeply flawed" and the evidence on record suggested that adequate "time and devotion" was not given while fleshing out the economic policy, in violation of the requirements inhering in Sub-section (2) of Section 26 of the Reserve Bank of India Act, 1934.

Chidambaram theorised, "My calculation shows that this entire exercise was done in about 26 hours. The letter reached the RBI on November 7 post-afternoon, after which the Central Board was called, presumably by telephone to meet in Delhi on November 8. They meet at 5:30 PM, within an hour or an hour and a half, the recommendation is taken by hand to the Cabinet, which is waiting. Then, the Prime Minister goes on television at 8 PM." Expressing his profound disapproval, the senior counsel said, "This is the most outrageous decision-making process which makes a mockery of the rule of law."

He further alleged that the possible consequences of such a monumental policy were not researched nor documented. The extent of the socioeconomic fallout was also not known to the directors on the Central Board of the Reserve Bank or the Ministers in the Narendra Modi-led cabinet, the senior counsel claimed. "No one was told that 86% of the total currency would be withdrawn. This is not a guess, but an informed guess," he submitted.

The reluctance of the central government in furnishing material particulars related to the decision-making process was also highlighted by Chidambaram. "We still do not have the November 7 letter from the Union Government to the Reserve Bank of India, the agenda note placed before the Central Board of the Reserve Bank, the minutes of the Central Board meeting and their recommendations, and the actual Cabinet decision on November 8. These documents have not yet been placed in the public domain, despite the passage of six years," he informed the Bench.

The main submissions put forth by the former Finance Minister were with respect to the width and the breadth of Sub-section (2) of Section 26 of the RBI Act, which empowers the central government, on the recommendation of the Reserve Bank, to declare that "any series of banknotes of any denomination" would cease to be legal tender.

First, Chidambaram contended that Section 26(2) should be read down. It could not be construed as conferring on the central government the power to demonetise all series of banknotes of any denomination by issuing a notification in the Official Gazette. The question of whether such power was available would turn on the interpretation of the word 'any' in the section. Chidambaram said that the word should not be interpreted to mean 'all'. In other words, the government could only demonetise any particular series of banknotes of any denomination. Anything in excess of this would require parliamentary sanction. To illustrate this point, he took the court through the legislations that preceded the episodes of demonetisation in 1946 and 1978.

He asked, "In 1946, why did the government not rely on the Reserve Bank of India Act, 1934 even though it was available, instead of the power of plenary legislation under the Government of India Act, 1935? In 1976, why did they have to say notwithstanding anything contained in Section 26 of the RBI Act, if this section conferred the power?" "Therefore, Section 26 gave limited powers to demonetise any series of a denomination. In order to demonetise all series of a denomination, the government had to pass a special legislation," he explained.

He further submitted, "Say, a new series is printed and issued on November 7. Can the government demonetise it on the very next day? Or could the government withdraw 99.9% of the currency from circulation? It would be absurd and unreasonable. It would be an arbitrary exercise of power. That is why, 'any' and not 'all'. This indicates that the Reserve Bank must apply its mind before making a recommendation." "Whatever happened in 2016 has happened," he insisted, "But this court must make it abundantly clear that the government does not have that power." To prevent the country from being thrown into complete chaos once again, the apex court must categorically state that such an "unguided and uncanalised" power could not be exercised by the executive government, the senior counsel argued.

Alternatively, he submitted that if the power of the Central Government to demonetise all series of banknotes of any denomination was recognised, it would be subject to the discipline of Part III of the Constitution for violating Articles 14, 19, and 21 and on the ground that it amounted to an impermissible delegation of power. "If a drastic power to demonetise the currency notes of all series of a certain denomination was intended to be conferred on the executive, the Parliament should have laid down relevant factors to be taken into consideration," Chidambaram argued, "In the absence of any such policy or guidelines, the provision, if not read down in the manner suggested, would be liable to be struck down as unconstitutional."

Chidambaram also contended that the government had designed "false and illusory objectives" to justify demonetising Rs 500 and Rs 1000 currency notes. "There were three main objectives – weeding out fake currency, cracking down on unaccounted wealth or black money, and stopping fake currency from being used to fund subversive activities like drug trafficking and terrorism," the senior counsel stated. He contended that these objectives "could not be achieved, and were in fact, not achieved". He added, "The only conclusion is that the government had set false objectives to justify this arbitrary and unreasonable policy."

When weighed against the "horrendous consequences", Chidambaram argued, the policy also failed the test of proportionality. To drive this point home, he highlighted the impact of the banknote demonetisation on different sectors of the economy, particularly agriculture. He also drew the attention of the court to how certain sections of the population like the rural poor and people from the North-Eastern states were disproportionately affected due to faults in implementation.

Justice Nazeer, however, asked, "What can be done now? It is over now." "We appreciate the first point with respect to defining the contours of Section 26. We will consider that," he explained, "But all the other points are to do with past incidents which we cannot change. That is why at the threshold, we were asking whether the writ petition has survived." In response, Chidambaram explained that the Supreme Court had wide powers to "grant declaratory reliefs, lay down the law, and mould reliefs" under Articles 32, 141, and 142, which enabled the highest court of the land to do complete justice.

"Demonetisation was an extreme step. If there is one major economic decision taken in the last one or two decades which has affected the lives of all the citizens of the country, it is the 2016 demonetisation. If this court holds that the decision and the decision-making process were flawed, that itself is good enough. It will prevent the government from embarking on such a misadventure in future," Chidambaram guaranteed.