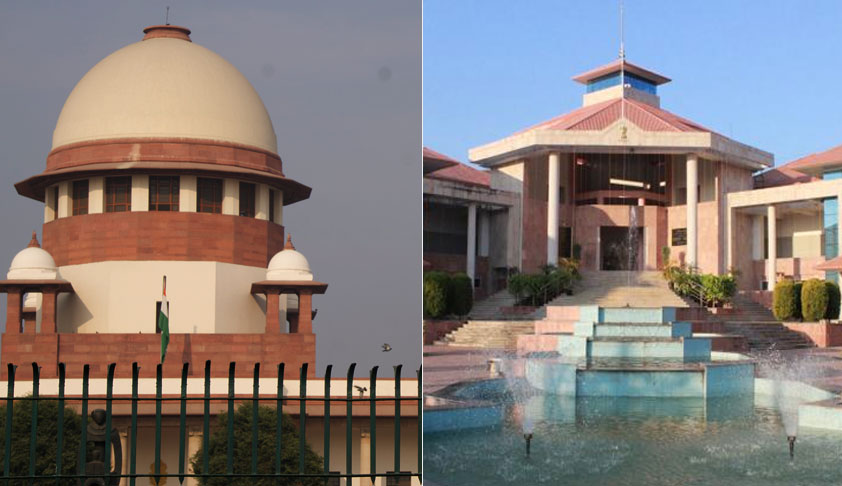 The Supreme Court today issued notice in pleas filed by Keshtrimayum Biren Singh, Yengkhom Surchandra Singh and Sanasam Biren Singh assailing Manipur High Court's order of upholding the speaker's decision of disqualifying them from the term of the 11th Legislative Assembly of Manipur.

Appearing for the disqualified MLAs, Senior Advocate Mukul Rohatgi submitted that the proceedings before the speaker were in violation of the principles of natural justice and that order for disqualification was passed without hearing the parties.

Arguing that the speaker's order was flawed, the Senior Counsel submitted that there was no evidence of the MLAs voluntarily giving up their membership and that the entire case was built up on concocted newspaper reports.

"It can't be that no party will appear. However, there's a flaw in the reasoning laid down by the speaker. None appeared, nothing was proved, no evidence was taken. The case is built on newspaper reports. In my written statement, I've written that it's concocted. Without any proof, there is a video & there's no certificate under section 65B of Evidence Act, 1872," argued Senior Counsel.

Arguing that concocted media and newspaper reports could not form the basis for disqualification, Senior Counsel submitted that "Without proving anything they file a DVD & there's no certificate(under Section 65B Evidence Act). The speaker accepts the evidence & disqualifies the members stating that it is open & shut case."

Pointing out to the other similar cases wherein evidence such as newspaper reports were not considered for disqualification, Senior Advocate Mukul Rohatgi also submitted that in other similar cases, the result was completely different as compared to what the speaker has held in the present case.

During the course hearing, Justice UU Lalit posed some questions to the counsel appearing on Speaker's behalf:

Appearing on Speaker's behalf, AAG Lenin Singh to respond to the questions posed by Justice Lalit submitted that, "They were generally denying the averments but not the fact that they were wearing caps of BJP."

The MLA's were disqualified on the ground that they along with another MLA of the Indian National Congress Shri Paonam Brojen had given up their membership voluntarily and had given their support to the ruling party i.e, Bharatiya Janata Party (BJP) for the purpose of strengthening the coalition Government led by the BJP.

It was also alleged that MLA's along with other MLA's of INC was facilitated by performing a reception ceremony hosted on July 15, 2017, by the Chief Minister of Manipur, Shri N. Biren Singh and that the said reception ceremony was covered and published in many Local/National Newspapers and Electronic medias.

It was also further alleged that the MLA's had participated in various political works and programs hosted by the BJP by wearing the apparel meant for the BJP and such programs in which they participated were reported in the public domain in various Local/National Newspapers and electronic medias and that in view of such acts, it was beyond any doubt that the petitioners had voluntarily given up their membership of the I.N.C and committed a Constitutional act of defection under Para 2(1) (a) of the Tenth Schedule of the Constitution.

What Was The Manipur High Court Order

The Manipur High Court while upholding the Speaker's decision had observed that "In the absence of denial by the writ petitioner of the existence and authenticity of the newspapers and as there is also no denial of the reports made in the newspapers about the factum of the writ petitioner participating in the reception ceremony organised by the BJP and being facilitated by the BJP leaders on his voluntarily giving up the membership of the Indian National Congress Party and joining the BJP, the question of admissibility of the reports contain in the newspapers as a piece of evidence has virtually lost its relevance. Accordingly, we are also of the considered view that the judgment of the Hon'ble Apex Court cited by the learned Senior counsel for the petitioner has also no application in the facts and circumstances of the present case."