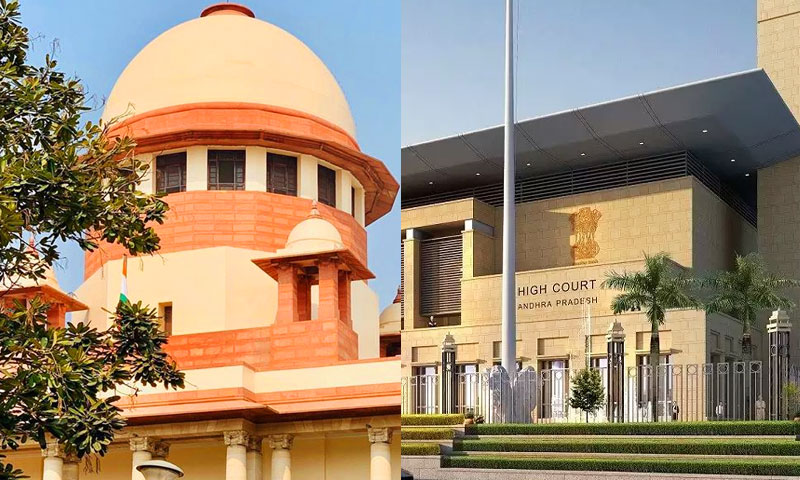 The Supreme Court on Monday required Retired Andhra Pradesh High Court Judge, Justice V. Eswaraiah to file an affidavit admitting that he did enter into an alleged private phone conversation with a suspended District Munsif Magistrate of Andhra Pradesh, into which an inquiry has been ordered by the High Court. After it was alleged that the phone call disclosed a "serious...

The Supreme Court on Monday required Retired Andhra Pradesh High Court Judge, Justice V. Eswaraiah to file an affidavit admitting that he did enter into an alleged private phone conversation with a suspended District Munsif Magistrate of Andhra Pradesh, into which an inquiry has been ordered by the High Court.

After it was alleged that the phone call disclosed a "serious conspiracy" against the High Court Chief Justice and a senior sitting Judge of the Supreme Court, the AndhraPradesh High directed an investigation by retired Supreme Court judge Justice RV Raveendran into it, against which order Justice Eswaraiah has moved the top court.

Appearing before a bench headed by Justice Ashok Bhushan, Advocate Prashant Bhushan, for the petitioner advanced, "This is an astonishing order of the High Court. Please look at the sequence of events – on 11th July, a petition was moved in the High Court on behalf of a backward classes body that the Covid guidelines are not being followed in the High Court. The judgement was reserved on 31st July. Subsequently, on 4 August, an intervention application came to be filed by a suspended district magistrate that a conversation had taken place between himself and the present petitioner on 20th July. The conversation was also filed and it was also subsequently leaked to the media. The High Court then ordered enquiry into the conversation because it allegedly relates to a controversy involving a sitting Supreme Court judge and the Chief Justice of the High Court"

"How can a private conversation be enquired into by the High Court? I fail to see what crime has been committed even if the conversation revolves around some misconduct by the Supreme Court judge and the High Court Chief Justice? There was no notice to me! My impleadmeant application was not allowed! And an enquiry has been ordered? This is out of order! I request for a notice on my petition and for a stay on the enquiry ", pleaded Mr Bhushan.

Next, the advocate indicated the November 2020 order of the apex court staying the AP High Court order restraining media reporting and social media comments as regards the Amaravati land scam FIR, in which the said sitting Supreme Court judge's daughters have come to be named.

"Your Lordships are dealing with a related issue of the gag order… ", began Mr Bhushan.

"That is a different issue altogether. It has nothing to do with this", said Justice Bhushan

Senior Advocate Kapil Sibal, appearing for an intervener, advanced, "Please issue notice. There is nothing private about this conversation. What is a private conversation?"

Mr Bhushan pressed that it is a conversation between two people and therefore, it is private.

Justice Bhushan asked of Mr Bhushan, "Do you admit that you had entered into the conversation?"

"Yes, the conversation took place. We have filed the correct transcript of it because the one annexed before the High Court was wrong", replied Mr. Bhushan.

"If you admit that then no enquiry is needed", noted Justice Bhushan, even as Mr Sibal pressed that "it is a more serious matter".

"It is not a crime to discuss (an issue)", argued Mr. Bhushan.

"Give an affidavit stating that the conversation was entered into by the petitioner and that the correct transcript has been filed. We will dismiss the petition and close the enquiry", ordered Justice Bhushan.

"No problem", replied Mr Bhushan. "We have no objection to this", concurred Mr. Sibal.

Noting that the transcript of the talk between the petitioner and suspended District Munsif Magistrate, Mr. S. Ramakrishna is filed, the bench granted time until next Monday for the said affidavit to also be brought on record.

Declaring that it shall pass "appropriate orders" when the aforesaid is carried out, the bench did not issue notice on the petition or the intervention applications.

Mr. Bhushan, in a lighter vein, pointed out that both Senior Advocates Harish Salve and Mr. Sibal appear in the matter for interveners.

"We also stand for the institution some times", remarked Mr. Salve.