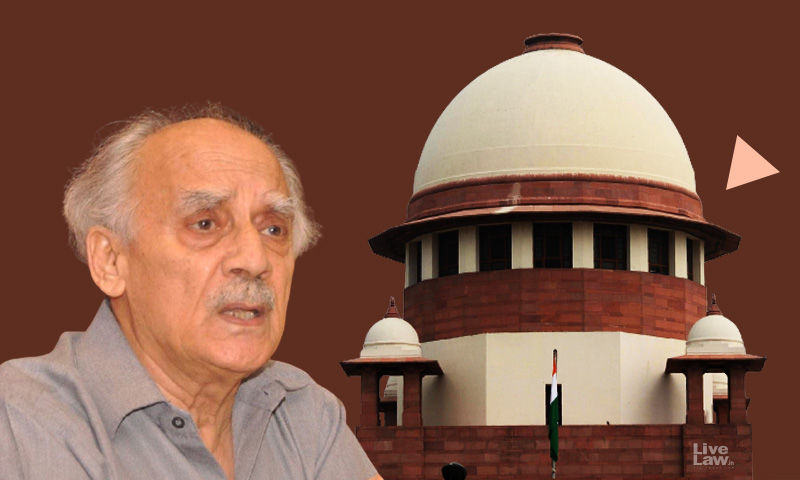 "Sedition is a colonial law which was used expressly to suppress dissent by the British in India," says another plea filed before the Supreme Court challenging the constitutional validity of Section 124-A of IPC as being violative of Articles 14, 19(1)(a), & 21 of the Constitution. Filed through Advocate Prashant Bhushan on behalf of former IT Minister Arun Shourie and NGO...

"Sedition is a colonial law which was used expressly to suppress dissent by the British in India," says another plea filed before the Supreme Court challenging the constitutional validity of Section 124-A of IPC as being violative of Articles 14, 19(1)(a), & 21 of the Constitution.

Filed through Advocate Prashant Bhushan on behalf of former IT Minister Arun Shourie and NGO Common Cause, the plea states that though the provision was upheld by the Supreme Court in Kedar Nath v. State of Bihar in 1962, the position of law has hence changed and the matter requires reconsideration.

In this regard it is pointed out that Kedar Nath case upheld the provision because faced with two interpretations of Section 124A, the court applied the Doctrine of Presumption of Constitutionality, to adopt the interpretation which could save the section.

"Therefore, in view of the above it is submitted that the doctrine of "reading down" in absence of presumption of constitutionality cannot be pressed into service of Section 124A of Penal Code, 1860, whose language is otherwise plain and clear," states the plea.

Moreover it is pointed out that the judgment erroneously relies on the case of RMD Chamarbaugwala v. Union of India, (1957) SCR 930, to apply the doctrine of severability because the court has not 'read down' any part of the definition of Section 124A of Indian Penal Code, 1860. "Rather the court has 'read into' the section words that are incompatible with the clear and unambiguous intent of the section," the plea reads.

It is thus urged that the provision be declared as unconstitutional and in the alternative, direct that strict action as per law be taken against concerned public servants and 26 complainant/informants in cases where the accused is discharged in a case of sedition and lay down guidelines for the same.

Further, it is averred that in Kedar Nath case, the Court failed to take note of a Constitution Bench judgment in Superintendent Central Prison v. Dr Ram Manohar Lohia (1960) 2 SCR 821, wherein it was held that (a) only aggravated disturbance of 'public order' as opposed to mere 'law and order' could be used to restrict freedom of speech and expression and (b) there should be direct and proximate connection between the instigation and the aggravated disruption of public order.

"As per 'Kedar Nath' the offence of sedition is complete if the activities tend to create public disorder or disturbance of law and order or public peace. By casting 'the net' too wide the interpretation given in Kedar Nath falls foul of the judgment of this Hon'ble Court in Superintendent Central Prison v. Dr Ram Manohar Lohia (1960) 2 SCR 821," the plea adds.

The plea states that terms like "contempt", "hatred", and "disaffection" used in the impugned section are overbroad. Further, the provision doesn't distinguish between mass dissemination and intimate conversation. It is submitted,

"The section makes an intimate conversation with a minor or paralytic person as an offence of sedition even though there can be no apprehension of any public disorder from such a person. A person hearing a speech may begin to hate the Government, or feel disloyal towards it, or may hold it in contempt, but is not bound to disturb the public order and may refrain from doing any overact. Whether a speech will cause disorder or not depends not only upon its content but also upon the nature of the listener, his opportunities, and the state of the country at the time. The offence under section 124-A is complete if a person speaks anything that has tendency to create public disorder or disturbance of public peace or law and order without in any manner impacting public order. Hence the section doesn't have any proximate relationship with the public order as there is no proximate 19 connection between the instigation and public order."

The plea adds, "mere advocacy and discussion which is protected under Article 19(1)(a) has been made punishable under Section 124 - A of Indian Penal Code."

It is also alleged that the offence of sedition has come to be "heavily abused" with cases being filed against citizens for exercising their freedom of speech and expression on the basis of the literal definition that is available to law enforcement authorities on the statute books.

"The abuse of the law has been brought forth in a comprehensive database prepared by Article 14, an online news portal, which has meticulously documented all cases of sedition since 2010,"

Significantly, CJI NV Ramana also today expressed alarm at the rampant misuse of the provision and expressed reservation at continuing its use.

A Bench headed by Justice UU Lalit is also hearing a plea, as well as Intervention Applications, challenging the constitutional validity of Section 12 4A of the IPC. On 30 April, the Court had issued notice in the plea filed by two journalists working in the States of Manipur and Chhattisgarh.