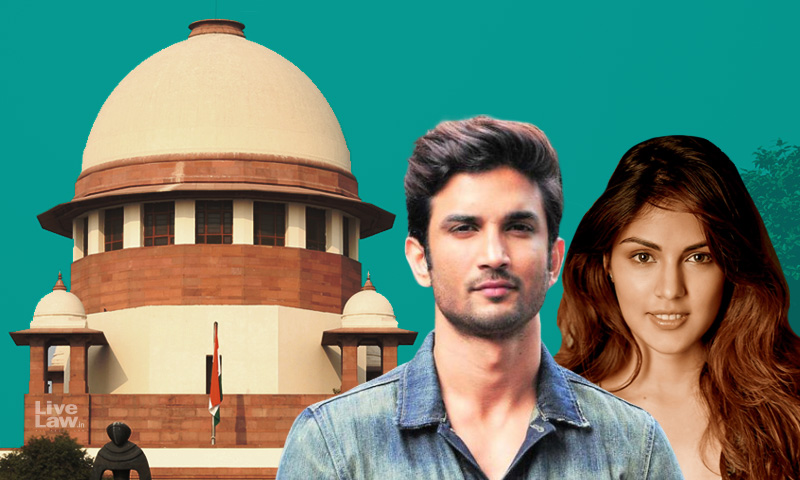 The Mumbai police has filed its affidavit before the Supreme Court challenging the July 25 FIR, at the instance of Sushant Singh Rajput's father against actor Rhea Chakraborty and 5 others for abetment to suicide, registered in Patna and subsequently transfered to the CBI. The affidavit reads that pending the present proceedings, the CBI ought not to have gone ahead and registered the...

The Mumbai police has filed its affidavit before the Supreme Court challenging the July 25 FIR, at the instance of Sushant Singh Rajput's father against actor Rhea Chakraborty and 5 others for abetment to suicide, registered in Patna and subsequently transfered to the CBI.

The affidavit reads that pending the present proceedings, the CBI ought not to have gone ahead and registered the case with it or constituted a team for conducting the investigation. It ought to have awaited the final decision of the present proceedings at the hands of the Apex court, especially in view of this court order passed on August 5. The Centre informed the Supreme Court on Wednesday that it has accepted the Bihar Government's recommendation for a CBI probe into the late actor Sushant Singh Rajput's death case.

A bench of Justice Hrishikesh Roy refused to grant a stay in Chakraborty's plea seeking transfer of an FIR filed against her from Patna to Mumbai and the stay on the investigation by the Bihar police. The bench granted 3 days to all parties to file reply and sought an update from State of Maharashtra on the Investigation done by Mumbai Police.

"Suffice it to say that, the indecent haste with which the CBI has proceeded in this regard speaks for itself, regarding the bona fides of all involved in this exercise", the Mumbai Police contends.

Asserting that in compliance with the August 5 order, the report regarding the status of investigation into the said ADR has been filed in a sealed cover in this court, which is "self-explanatory", the Mumbai police has argued that the investigation is still continuing and hence, it is in the interests of justice that the details of the investigation are not shared with Chakraborty or any other persons except this court. "That the report has been filed in a sealed cover so that this court is able to satisfy itself about the fairness, impartiality as also the professionalism with which the said investigation is being conducted by the Mumbai police into the said ADR", it is stressed.

The affidavit further contends that "About 38 days of the death of the deceased, the father of the deceased filed a complaint before the Additional Chief Judicial Magistrate, Patna, alleging offences under sections 341, 342, 380, 406, 420, 306, 506, and 120 B of the IPC and the Bihar police has registered an FIR against the petitioner and her family members, even though not only the death of the deceased but also each and every part of the cause and consequence relating to the said death has taken place at Mumbai, and in any case, in the state of Maharashtra".

It is pointed out that the father was entitled to approach the chief judicial magistrate, Bandra, Mumbai, under section 156(3) of the CRPC for an order directing investigation into the death of the deceased but even that was not done.

It is urged that Rajput's father, despite being aware of the fact that the Mumbai police have been investigating the said ADR, did not make any request to the Mumbai police regarding registering FIR against the petitioner and her family members or any ground whatsoever, that it is not the case that the Mumbai police had refused to register the FIR. It is insisted that on the contrary, the statements recorded of all the close relatives of the deceased, including the father, as soon as possible after the said death, demonstrate that none of them had any suspicion about the suicide committed by the deceased or against anybody. "It is most important to note that these are the statements recorded first in point of time, unlike the subsequent statements with numerous improvements that are apparently tainted with afterthought, to say the least", reads the affidavit.

It is advanced that neither the judicial jurisdiction lay in the state of Bihar nor the investigative jurisdiction lay with the Bihar police. A perusal of the FIR that is now registered by the Bihar police shows that none of the alleged offences have been committed within the local limits of the police station, either by the petitioner or for that matter anybody else, and in the circumstances, the objection to the territorial jurisdiction can be raised at the pre-cognisance stage also.

"Such a practice ought to be deprecated as anybody will approach the state police of his choice and register FIR at the police station of his choice and this will lead to disastrous consequences. Any accused will be able to have an offence investigated by the investigating authority of his choice, by getting FIR registered at any particular police station or by getting it transferred. Even the complainant and the accused cannot jointly and with mutual consent decide as to which police is to investigate the crime in issue", argues Mumbai Police.

It is advanced that even assuming that the FIR in issue is maintainable, it was mandatory for the Patna police to follow the procedure prescribed under the advisory issued by Ministry of home affairs dated 10 May 2013 and to register a zero FIR and transfer the same to the Bandra police Mumbai.

"On 27th July, four police officers from the Bihar police landed in Mumbai and commenced their own simultaneous enquiry. The information collected by the Bihar police was also revealed to the media despite the fact that such revelations would jeopardise the investigation being conducted by the Mumbai police into the said ADR. There cannot be two simultaneous enquiries, much less investigations, by two different agencies in respect of the same incident and as such simultaneous enquiry were to continue, it may result in conflicting results, apart from its adverse effects, it will ultimately end up in helping the suspect or accused, if any and if at all", it is stated.

The affidavit denies the suggestion that the quarantine of the Bihar IPS officer, Mr Vinay Tiwari, was aimed at obstructing the investigation by the Bihar police. In fact such a step was taken by the Municipal Corporation for Greater Mumbai and not by the police authorities. It is pointed out that the protocol by the state of Maharashtra for domestic passengers arriving at Mumbai airport requires that such passengers are to undergo 14 days home quarantine, the only exception being domestic passengers who intend to exit Mumbai within seven days of arrival provided they are able to produce a confirmed ticket for the onward/return journey.

"The newspaper report produced on record by the petitioner states that the Bihar police were hesitant for registration of the FIR but the CM of Bihar and another minister had persuaded them to register it. So it was a politically motivated exercise, one due to extraneous reasons", avers the Mumbai Police.

It is submitted that Section 177 of the CRPC provides that every offence shall ordinarily be enquired into and tried by a court within whose local jurisdiction it was committed, and that the provisions contained in section 178 to section 183 are exceptions to the general rule for enquiry and trial.

"Not a single legally permissible and sustainable ground existed nor does it exist either for the registration of the FIR at Patna or for the transfer of such non-maintainable FIR to the CBI. The alleged sensitivity of the matter cannot be a ground for the registration of the FIR or investigation into the matter by the Bihar police or for that matter to be transferred to the CBI. The recommendation by the Addl. CJM, Patna to transfer the investigation into the FIR by the CBI bristles with mala fide and the same is void ab initio", it is contended.

It is further submitted that the jurisdiction of CBI is confined only to union territories for investigation of offences notified under section 3 of the DSPE act. It requires consent of the concerned state government under section 6 of the DSPE act. Further the CBI requires a corresponding notification from the central government under section 5 of the DSPE act before taking up the investigation of a case outside the union territories. "In other words, law and order being a state subject, the CBI derives jurisdiction only when valid consent is given. As the state of Maharashtra has not given any consent as provided under section 6 for transferring the investigation into the FIR to the CBI, the investigation into the FIR cannot be transferred to the CBI. In the facts and circumstances of the present case it is only the state of Maharashtra which is competent to give consent, the alleged cause of action having completely arisen within the state", the affidavit argues.

It is finally urged that assuming that the CBI is entitled to register the FIR, then also it is mandatory for the CBI to follow the procedure prescribed in the 10 May, 2013 advisory and to transfer the same to the Bandra police station.