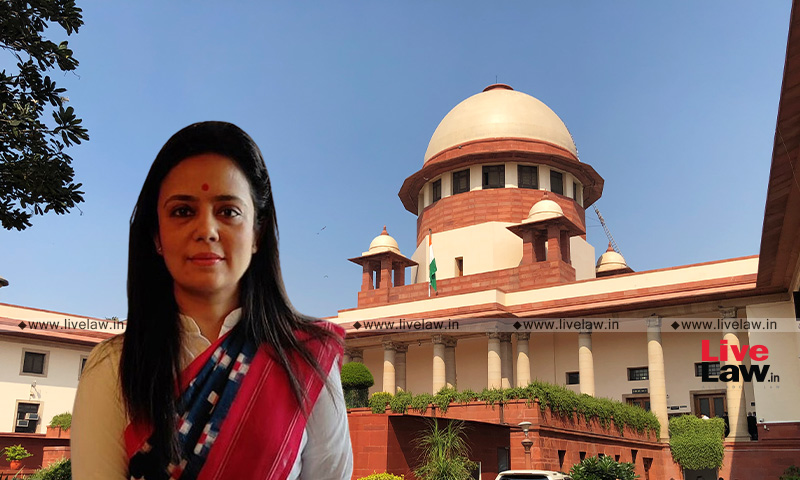 All India Trinamool Congress Lok Sabha Member of Parliament, Mahua Moitra has moved the Supreme Court challenging the Ordinances which permit extension of the tenures of the Directors of Central Bureau of Investigation (CBI) and Enforcement Directorate (ED) for upto 5 years.Claiming that the ordinances are against the Judgments of the Supreme Court, Mitra has moved this plea and has tweeted...

All India Trinamool Congress Lok Sabha Member of Parliament, Mahua Moitra has moved the Supreme Court challenging the Ordinances which permit extension of the tenures of the Directors of Central Bureau of Investigation (CBI) and Enforcement Directorate (ED) for upto 5 years.

Claiming that the ordinances are against the Judgments of the Supreme Court, Mitra has moved this plea and has tweeted about the same.

The plea states that the Supreme Court had, in Common Cause v. Union of India, 2021 SCC OnLine SC 687, held that the tenure of a Director of Enforcement cannot be extended beyond his date of superannuation except in "rare and exceptional cases" for a short period".

Against this backdrop, the plea avers that this judgment is sought to be nullified not even by the legislative process but by the Central Vigilance Commission (Amendment) Ordinance, 2021, which allows the extension of tenure one year at a time for a total of five years in the public interest".

"The Executive cannot nullify a judgment and order of the Supreme Court through an executive Act like an ordinance, and to the contrary, is obliged to comply with this Hon'ble Court's orders in terms of Articles 141 and 144 of the Constitution," the plea states.

In any event, the plea adds, an inter partes decision rendered by this Court or a mandamus issued in respect of a specific party cannot be overruled even through legislative exercise.

It further says that the impugned Ordinances attack the independence and impartiality of the CBI and ED and violate the principles of fair investigation and fair trial enshrined in Articles 14 & 21 of the Constitution.

"The impugned ordinances allow the Central Government to effectively control an incumbent ED Director or CBI Director by wielding the power to extend the tenures of these Directors in the public interest," adds the plea.

It may be noted that the President of India, on November 14 promulgated two Ordinances to allow the extension of the tenure of the Directors of the Central Bureau of Investigation (CBI) and Enforcement Directorate (ED) up to 5 years.

As per the ordinance, the extension can be done for one year at a time subject to a maximum of 5 years.

The extension can be given for one year at a time for reasons recorded in writing. However, such extension cannot be given beyond a period of 5 years.

Significantly, this move comes ahead of the expiry of the term of the incumbent ED Director Sanjay Kumar Mishra on November 17. Last year, the Centre had retrospectively amended his appointment order issued in 2018, which had given him a term of 2 years, to give him an additional one year term.

That order was subject to challenge in a PIL filed by Common Cause.

In a recent decision, the Supreme Court dismissed the PIL of Common Cause, and upheld the power of the Central Government to extend the term of ED Director.

However, the bench led by Justice L Nageswara Rao had made it clear that such extension should be granted only in exceptional circumstances, that too for reasons recorded in writing. The Court had also directed that the term of SK Mishra should not be extended further.

It may be noted that yesterday, Binoy Viswam, a Rajya Sabha MP from the Communist Party of India (CPI) moved a Notice of Statutory Resolution in the Upper House of Parliament raising objections to the two ordinances.

Reportedly, a plea has already been moved in the Supreme Advocate by a Supreme Court advocate, ML Sharma challenging the constitutionality of the two ordinances.