To Punish For Contempt, Court Has To Show Comments 'Substantially Interfered With Administration Of Justice' :Dhavan Tells SC In Bhushan Case 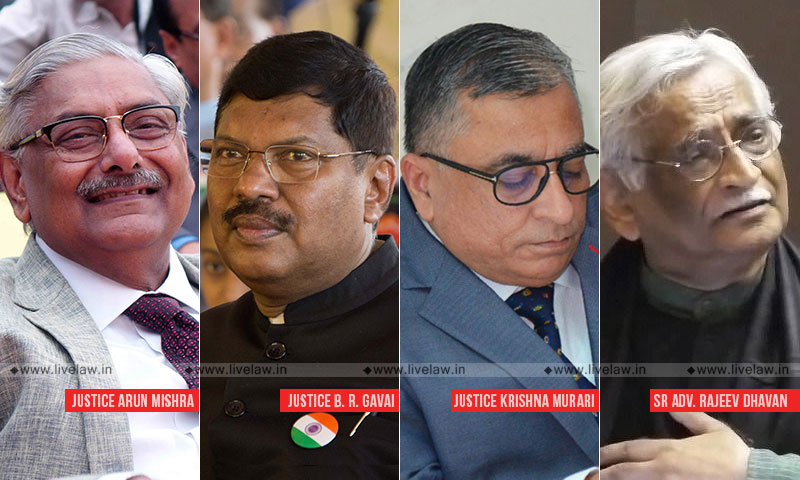 To punish for contempt, the court has to show that the comments "substantially interfered with the administration of justice", submitted Rajeev Dhavan, Senior Advocate, before the Supreme Court in the sentence hearing in the contempt case against Advocate Prashant Bhushan.Appearing for Bhushan, Dhavan referred to Section 13(1) of the Contempt of Courts Act.13. Contempts not punishable in...

To punish for contempt, the court has to show that the comments "substantially interfered with the administration of justice", submitted Rajeev Dhavan, Senior Advocate, before the Supreme Court in the sentence hearing in the contempt case against Advocate Prashant Bhushan.

Appearing for Bhushan, Dhavan referred to Section 13(1) of the Contempt of Courts Act.

13. Contempts not punishable in certain cases.—Notwithstanding anything contained in any law for the time being in force,—
(a) no court shall impose a sentence under this Act for a contempt of court unless it is satisfied that the contempt is of such a nature that it substantially interferes, or tends substantially to interfere with the due course of justice;
(b) the court may permit, in any proceeding for contempt of court, justification by truth as a valid defence if it is satisfied that it is in public interest and the request for invoking the said defence is bona fide.

"It is not enough that there should be some technical contempt. It must be shown that the act of contempt must "substantially interfere with the administration of justice.

It is not enough for the court to say that the remarks as scurrilous and all. The Court has to state that the comments have "substantially interfered with the administration justice.

As some commentator has said, how can a comment about CJI seated on a bike affect the administration of justice", Dhavan submitted before a bench comprising Justices Arun Mishra, BR Gavai and Krishna Murari.

He submitted that the August 14 judgment pronouncing Bhushan guilty of contempt of court did not state how his tweets "substantially interfered with the administration of justice".

Next, he referred to Section 13(2) of the Contempt of Courts Act to state that 'truth was a defence'.

He stressed that Bhushan had given elaborate justifications for his tweets in his 400-odd page reply affidavit. However, the bench did not consider the reply affidavit in it verdict, he said.

At his juncture, Justice  Gavai replied that Dushyant Dave (who had appeared for Bhushan in the contempt case) only referred to the earlier part of the affidavit, which was considered in the judgment and did not rely on the other parts of the affidavit.

"Dave had only taken us to page 40 of the affidavit and did not refer to the other parts", Justice Gavai said.

In response, Dhavan clarified what Dave said was that it would be embarrassing to read the other portions of the affidavit.

Dhavan says that what Dave said was that it would be embarrassing to read the other portions of the affidavit.#Bhushan #prashanthbhushan #contemptofcourt#SupremeCourt

As Dhavan started to refer to the averments in the reply affidavit, Justice Mishra told him ,"Dr. Dhavan why you are entering into all this?

Justice Mishra also requested not "to take names", when Dhavan started reading out portions from the affidavit with respect to his tweet dealing with four CJIs,

Dhavan said that two factors were relevant while considering the sentence :

1. Nature of the comments- there are already public discussions about the working of judiciary in recent times.

2. Nature of the person.

Justice Mishra said "we are quite impressed by the list( of cases fought by Bhushan pro bono)". This will weigh in your favour (with respect to sentencing)"

Dhavan also emphasized that the views of Bhushan were "echoed and supported" by several prominent public personalities including retired judges and asked "are they in contempt also?"

While concluding the hearing on the sentence today, the Court also said it will grant two-three days time to Prashant Bhushan to "reconsider" the statement made by him before the Court today, justifying his tweets.

"My tweets were nothing but a small attempt to discharge what I considered to be my highest duty at this juncture in the history of our republic. I did not tweet in a fit of absence mindedness. It would be insincere and contemptuous on my part to offer an apology for the tweets that expressed what was and continues to be my bonafide belief. Therefore, I can only humbly paraphrase what the father of the nation Mahatma Gandhi had said in his trial: I do not ask for mercy. I do not appeal to magnanimity. I am here, therefore, to cheerfully submit to any penalty that can lawfully be inflicted upon me for what the Court has determined to be an offence, and what appears to me to be the highest duty of a citizen", he said.

Nevertheless, the bench said that it will give him two or three days for him to reconsider the statement. Justice Mishra remarked that the Court will have to consider if Bhushan's statement was "a defence or an aggravation".

At the beginning of the hearing, the bench dismissed the application moved by Bhushan seeking to defer the hearing on the ground that he intended to file review.

"Sentence hearing is consequential to the conviction. Both can be reviewed, right?Can you say that consequential order cannot be passed? Judgment will be complete when it is totally pronounced", Justice Mishra told Dushyant Dave, who appeared in the application.

"In the event we impose any punishment, we assure you that it will not be activated until the review is decided', Justice Mishra assured.