[Breaking] TRP Scam : Bombay HC Asks Mumbai Police To First Issue Summons To Arnab Goswami If He Is Proposed To Be Added As Accused 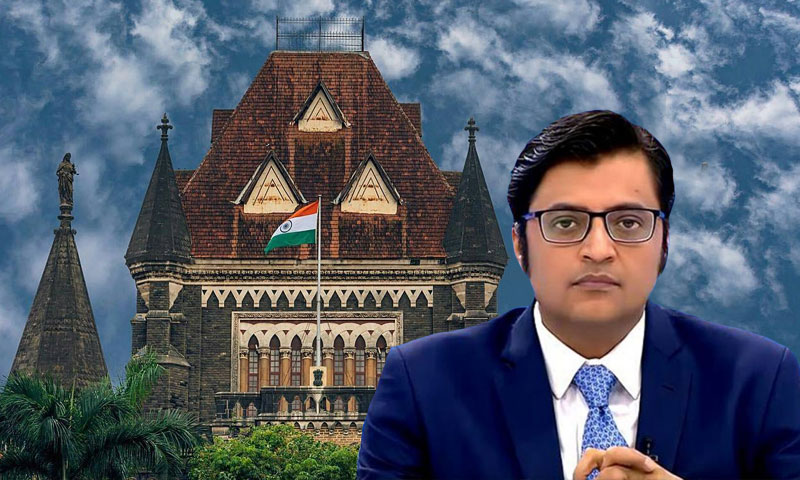 The Bombay High Court on Monday directed the Mumbai police to issue a summons to Mr. Arnab Goswami, the Editor-in-Chief of Republic TV, in the first instance if he is proposed to be added as an accused in the FIR alleging manipulation of Televions Rating Points(TRP).A bench comprising Justices SS Shinde and M S Karnik also recorded the statement made by Senior Advocate Harish Salve on behalf...

The Bombay High Court on Monday directed the Mumbai police to issue a summons to Mr. Arnab Goswami, the Editor-in-Chief of Republic TV, in the first instance if he is proposed to be added as an accused in the FIR alleging manipulation of Televions Rating Points(TRP).

A bench comprising Justices SS Shinde and M S Karnik also recorded the statement made by Senior Advocate Harish Salve on behalf of Goswami that he will appear and cooperate with the investigation if such a summons is received.

The bench issued notice on the writ petition filed by ARG Outlier Media Ltd(the company running RepublicTV & R Bharat) and Arnab Goswami seeking to quash the FIR registered by Kandivali police station for offences of cheating, criminal breach of trust and criminal conspiracy in relation to the TRP scam.

The bench has agreed to start the final hearing on the petition from November 5 at 3 PM. The Court also directed the Mumbai police to produce the investigation papers in a sealed cover on November 4.

Though Salve pressed for interim protection from arrest, the bench observed that it was difficult to pass such an order at the present stage when Goswami has not yet been named as an accused.

Nevertheless, Salve continued his persuasion by saying that the Mumbai police had mala-fides against Goswami and that they might arrest him after at any time.

The bench noted that the police has issued summons to seven employees of Republic TV and that none of them has been arrested so far.

Senior Advocate Kapil Sibal, appearing for the State of Maharashtra and Mumbai police, agreed that summons will be first issued to Goswami. He, however, expressed that he was not giving any commitment that Goswami will not be arrested.

The bench remarked that if a summons is issued, there will not be a question of arrest.

Salve submitted that the Mumbai Police Commissioner was acting vindictively by giving press statements against Republic TV and Goswami even though they have not been named as accused in the FIR. The critical reports made by Goswami agaisnt the Maharashtra police for its handling of Palghar case is the genesis of the controversy, Salve said.

He then narrated various events such as the SC order to consolidate the FIRs against Goswami over his reportage of Palghar and Bandra incidents, the Bombay HC stay on the FIRs, the appeal made by Shiv Sena to cable operators to boycott Republic TV, the breach of privilege notice issued by Maharashtra assembly against Goswami, and the latest show-cause notice issued by Mumbai police to him under Section 108 of the CrPC.

Salve argued that the present FIR was the latest in the series of actions taken by the Maharashtra administration to target and suppress the journalistic freedom of Republic TV.

Sibal submitted that the petition was premature and the investigation cannot be interdicted when it was at a very nascent stage. He contended that the issue of mala-fides has no relevance in a criminal investigation if there are incriminatory materials.

Sibal also submitted that Goswami was not entitled to 'special privileges' just because he was a journalist and that he should avail the remedy under Section 438 of the Code of Criminal Procedure to seek anticipatory bail if he was apprehensive of arrest.

Earlier, the petitioners had directly approached the Supreme Court with the plea. However, a bench headed by Justice D Y Chandrachud of the top court refused to entertain the petition and asked the petitioners to approach the Bombay High Court.

In the petition, Goswami stated that the FIR was a part of "political conspiracy" against Republic TV and that the Mumbai Police had "ill-will" against him.

"It is respectfully submitted that the Mumbai police, including the Respondent No. 4, Mr. Param Bir Singh harbour malice and ill-will against the Petitioners as Republic TV and R. Bharat have lately been at the forefront in questioning the tardy investigation by the Mumbai police in the Sushant Singh Rajput case and the Palghar lynching incident", the plea stated.

It was on October 8 that the Mumbai police told the press that it has detected the fraudulent practise of TRP manipulation. Republic TV and two Marathi channels were said to have been arrayed as accused in the FIR.

Mumbai Police Commissioner Param Bir Singh had told reporters an FIR has been registered at Kandivali Police Station for offences of criminal breach of trust (Section 409), cheating (420) and criminal conspiracy (120B) under the Indian Penal Code.

Complete updates from the hearing may be read in the twitter thread given below :