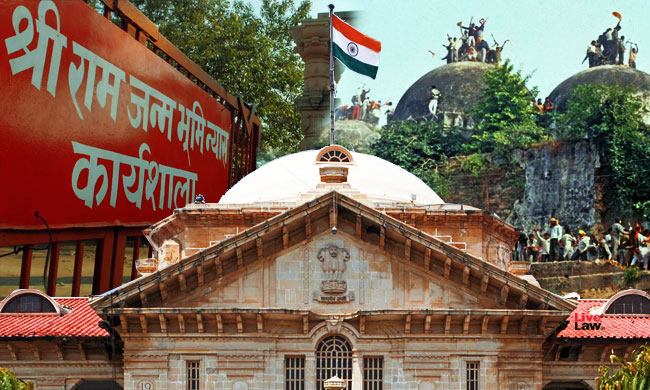 Though the hearing of the Ayodhya-Babri Masjid case is politically sensational with the undercurrents of religious sentiments, it is essentially a title dispute by two groups over 2.77 hectares of land in Faizabad district(now Ayodhya district) in UP.

The Constitution Bench of CJI Ranjan Gogoi, Justices S A Bobde, D Y Chandrachud, Ashok Bhushan and Abdul Nazeer is hearing first appeals from a preliminary decree of partition passed by the Allahabad High Court on September 30, 2010 in four civil suits. The suits were :

A detailed account of the four suits may be read here.

The background of the dispute is summarized by the Supreme Court in the 1994 Ismail Farooqi case as follows :

"Ayodhya situated in the north of India is a township in District Faizabad of Uttar Pradesh. It has long been a place of holy pilgrimage because of its mention in the epic Ramayana as the place of birth of Sri Ram. The structure commonly known as Ram Janma Bhoomi¬Babri Masjid was erected as a mosque by one Mir Baqi in Ayodhya in 1528 AD. It is claimed by some sections that it was built at the site believed to be the birthspot of Sri Ram where a temple had stood earlier. This resulted in a long¬standing dispute.

The controversy entered a new phase with the placing of idols in the disputed structure in December 1949. The premises were attached under Section 145 of the Code of Criminal Procedure. Civil suits were filed shortly thereafter. Interim orders in these civil suits 4 restrained the parties from removing the idols or interfering with their worship. In effect, therefore, from December 1949 till 6¬12¬1992 the structure had not been used as a mosque."

By 2:1 majority, the HC ruled that the 2.77 acres of Ayodhya land be divided into 3 parts, with 1/3 going to the deity for the construction of the Ram temple, 1/3 going to the Muslim Waqf Board and the remaining 1/3 going to Nirmohi Akhara.

The majority of Justices Khan and Agarwal held that the spot where idols were placed beneath the central dome of the damaged Babri Masjid should be allotted to the deity for the construction of temple.

In his dissenting judgment, Justice Sharma categorically stated that "the disputed site is the birthplace of Lord Ram" and held that Hindus had exclusive rights over the entire disputed site of 2.77 acres.

Certain key points of the HC judgment are discussed below:

Who was given possession of the land?

As per the majority judgment, none of the parties could establish title by way of documentary evidence.

Justice Khan observed that since none of the parties could establish the commencement of title, possession should be taken into account to determine the issue. The rule 'possession follows title' and the presumption under Section 110 of the Indian Evidence was applied.

"Muslims have not been able to prove that the land belonged to Babar under whose orders the mosque was constructed. Similarly Hindus have not been able to prove that there was any existing temple at the place where the mosque was constructed after demolishing the temple. It has also not been proved by the Hindus that the specific small portion i.e. premises in dispute of 1500 square yards was treated, believed and worshipped as birth-place of Lord Ram before construction of mosque. In such situation when both the parties have failed to prove initial title, (commencement of title) it is possession and possession alone which decides the question of title in accordance with Section 110, Evidence Act", Justice Khan observed.

Based on historical accounts, it was inferred that both the groups had access to the properties and were using it at least from 1850 onwards. Muslims and Hindus were using and occupying different portions of the premises and both continued to be in joint possession of the entire premises in dispute without formal partition.

Justice Khan held that both the parties were entitled to be declared as joint title holders in possession of the entire premises in dispute and a preliminary decree to that effect was passed with the condition that at the time of actual partition by meets and bounds at the stage of preparation of final decree, the portion beneath the central dome, where the idols were kept will be allotted to the share of the Hindus.

Justice Agarwal declared that the area covered by the central dome of the mosque is the place of birth of Lord Rama as per the "faith and belief of Hindus" and should be allotted to the plaintiffs in the 1989 suit.

Muslims and "Nirmohi Akhara", who claimed to be the custodians of the temple, were given 1/3rd share each.

In his dissenting judgment, Justice Sharma held that the entire dispute area was the birthplace of Lord Ram and that it was not possible to narrow down the spot to a specific location such as the place where idols kept in 1949.

"The Religious right of Hindus to worship Rama Lala at the Janmasthan became concretised before the Constitution came into being and the same requires to be protected.

It is established that the property in the suit is the site of Janmabhoomi of Ram Chandra Ji and Hindus have been worshipping the place in dispute as Janmasthan and visiting it as a sacred place of pilgrimage as of right since time immemorial ", Justice Sharma said.

"Place of birth is a juristic person and is a deity. It is personified as a spirit of divine worshipped as Lord Rama as a child.

Spirit of divine ever remains present everywhere at all times for anyone to invoke at any shape or form in accordance with his own aspirations and it can be shapeless and formless also", Justice Sharma added in his judgment, which rested mainly on the faith of the people and circumstantial evidence.

Are the suits time barred?

Justice Khan held that none of the suits were hit by limitation and that all of them were maintainable. The property remained under attachment under Section 145 CrPC, and the Magistrate had not passed final orders in the case. The limitation period will not start running unless Sec.145 proceedings were finally disposed of, he reasoned.

Justice Agarwal however held the suits by Nirmohi Akhara and Sunni Board to be time barred. The cause of action arose in 1949 when the parties were dispossessed by the order of the Magistrate, he held. So the suits filed in 1959 and 1961 for declaratory rights were held to be time barred.

According to Justice Agarwal, the period of limitation cannot apply to a religious place of particular significance. So the 1989 suit on behalf of the deity was held to be maintainable. In this regard, reliance was placed on certain observations by the Constitution Bench in the 1994 Ismail Farooqi case that acquisition proceedings cannot apply to religious place of particular significance.

"The above observations (in Ismail Farooqi) show if the religious endowment is of such nature, which is of specific significance or peculiar in nature, could not have been found elsewhere, the acquisition of such property by the Government will have the effect of depriving the worshippers their right of worship under Article 25 of the Constitution and such an acquisition even under the statutory provision, cannot be permitted.

We find sufficient justification to extend this plea to the statute of limitation also, inasmuch as, if the statute pertaining to acquisition cannot be extended to a religious place of special significance which may have the effect of destroying the right of worship at a particular place altogether, otherwise the provision will be ultra vires, the same would apply to the statute of limitation also and that be so, it has to be read that the statute of limitation to this extent may not be availed where the debutter's property is of such a nature that it may have the effect of extinction of the very right of worship on that place which is of peculiar nature and specific significance. This will be infringing the fundamental right under Article 25 of the Constitution."

"According to Hindus, this is a place of birth of lord Rama and that be so, there cannot be any other place for which such belief persists since time immemorial. Once this land is allowed to be lost due to the acts of persons other than Hindus, the very right of this Section of people, as protected by Article 25, shall stand destroyed. This is another reason for not attracting the provisions of limitation in the present case", he added.

"Ram Janmasthan in Ayodhya where Ram Lala is Virajman is a place of religious significance as described in the above judgment. If the sovereign authority, under the power of eminent domain, cannot acquire it, can a plea at the instance of plaintiffs who are private persons be entertained, upholding of which would lead to denial of such sacred place altogether to the Hindus."

Was the demolished structure a mosque?

Justice Khan observed that the disputed structure was a mosque constructed by or under the orders of Babar but there was not direct evidence to hold that a temple was destroyed for its construction.

Referring to accounts of historians and travelers, he opined that the mosque might have been built over the ruins of a temple which might have been lying there for a long time.

Justice Agarwal however said that the parties have failed to prove that the mosque was built by Babar.

Justice Sharma held that structure was constructed by Babar. However, the structure cannot be termed as a mosque as per the tenets of Islam, he held.

"According to the tenets of Islam, minarets are required to give Azan. There cannot be a public place of worship in mosque in which Provision of Azan is not available, hence the disputed structure cannot be deemed to be a mosque.

According to Islamic tenets, there cannot be a mosque without place of Wazoo and surrounded by a graveyard on three sides. Thus, in view of the above discussions, there is a strong circumstance that without any minaret there cannot be any mosque.", Justice Sharma said.

Justice Khan however had held that the absence of minarets, place of wazoo or presence of graveyard will not mean that the place is not a mosque.

Was the report by ASI accepted?

Differing from the majority, Justice Sharma gave credence to the reports of the Archaeological Survey of India to hold that the mosque was built after destroying an existing temple.

"Conclusions of A.S.I. Report 2003, are not of much help in this regard for two reasons. Firstly, the conclusion that there is 'evidence of continuity in structural phases from the tenth Century onward upto the construction of the disputed structure' is directly in conflict with the pleadings, gazetteers and history books. Neither it has been pleaded by any party nor mentioned in any gazetteer or most of the history books that after construction of temples by Vikramadittya in first Century B.C. (or third or fourth century A.D., according to some) and till the construction of the mosque in question around 1528 A.D. any construction activity was carried out at the site of the premises in dispute or around that.

Secondly, in case some temple had been demolished for constructing the mosque then the superstructure material of the temple would not have gone inside the ground. It should have been either reused or removed. No learned counsel appearing for any of the Hindu parties has been able to explain this position"