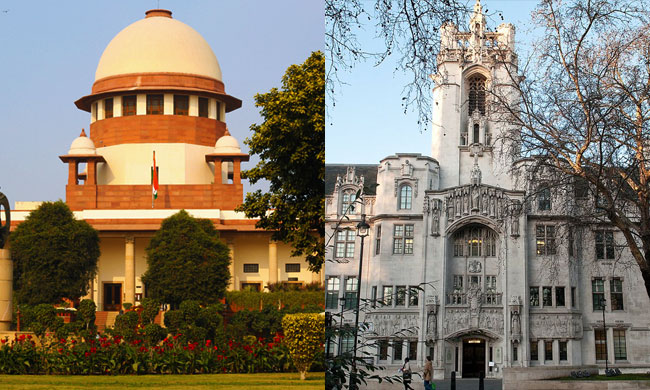 Major constitutional challenges in Courts are often loaded with political overtones. If the questions are too political, the Courts might decline to exercise jurisdiction, refraining from wading into the 'political thicket'. But if the case involves infringement of fundamental rights of the citizens, the politics of the issue should not hold back the Court from giving a prompt verdict.Time is...

Major constitutional challenges in Courts are often loaded with political overtones. If the questions are too political, the Courts might decline to exercise jurisdiction, refraining from wading into the 'political thicket'. But if the case involves infringement of fundamental rights of the citizens, the politics of the issue should not hold back the Court from giving a prompt verdict.

Time is of the essence of many such cases. Slow judicial response to constitutional challenges might perpetuate unconstitutionality.

The recent responses of Supreme Courts of India and United Kingdom to cases involving serious constitutional questions with apparent political undercurrents offer a study in contrast.

In a highly commendable manner, the Supreme Court of United Kingdom completed on September 19 the hearing of the what some commentators term the 'greatest constitutional challenge ever' in the country. From September 17, the 11-judge bench of the top court of UK held three days of consecutive hearing of challenge against the constitutionality of the prorogation of the UK Parliament by Prime Minister Boris Johnson. The Court declared that the decision is likely to be published early next week.

This exercise is remarkable for two reasons - the swiftness of the Court response & the transparency and openness of Court proceedings.

The hearing of 'R (on behalf of Miller) v The Prime Minister' and 'Cherry and others v Advocate General for Scotland' is now complete. pic.twitter.com/v9SXYX46LF

Appeals were filed against both the decisions in the Supreme Court, which decided to hold a special hearing from September 16 to 19. Lady Hale, the presiding judge, said that the appeals had to be heard on a short notice for "obvious reasons".

Around the same time, the Supreme Court of India was also presented with matters involving significant constitutional issues.

Soon after the Central Government took measures to revoke the special status of Jammu and Kashmir, several petitions were filed in the SC questioning the government move and challenging the lockdown and communication blockade imposed in the region. Also, habeas corpus petitions alleging illegal detention of persons were also filed.

Regardless of the merits of the petitions, the Court did not show much sense of urgency in dealing with them.

On August 13, when the petition challenging communication blockade and detention of political leaders were listed before the Court, it simply adjourned the hearing, saying that it would like to give the government some time for restoring normalcy.

On August 28, while considering the habeas petition filed by CPI(M) General Secretary Sitaram Yechury seeking release of former J&K legislator M Y Tarigami, the Court passed an order allowing the petitioner to travel to the detenu to enquire about his well being, without bothering to ask the government about the grounds of detention.

On the same day, it referred the petitions challenging the Presidential Orders under Article 370 to the Constitution Bench, to be heard sometime in October.

In the habeas corpus petition filed by MDMK leader Vaiko alleging illegal detention of former J&K CM Farooq Abdullah, the Central Government was given two weeks time by the Court to respond.

In the case of Tarigami, the Court passed orders for bringing him to AIIMS Delhi for medical treatment, and allowed him to travel back to Kashmir after cure. All this while, no query was raised regarding the grounds of his detention. The Court adjourned the hearing of the main issue (without giving any date), by saying "the writ petition is kept open for a decision on the validity of the alleged detention of the petitioner claimed to be without any authority of law with effect from 05.08.2019".

On September 16 - when the lockdown of J&K had entered the 42nd day - the Court passed an order, saying that the Government should take efforts to restore normalcy in Kashmir, subject to interests of national security. The petitioners repeatedly submitted on every day of the posting of the case that the curfew measures were disproportionate affecting the daily life of ordinary residents.  But the Court did not venture to make a prima facie examination of the legality, reasonableness and proportionality of the restrictions imposed by the Government. Instead, it passed a vacuous order, making normalcy subject to "national security". The vagueness of the order gives room for the continuation of the status quo.

A petition alleging illegal detention of children in Kashmir ought to have persuaded the Court to move promptly. When the petition was listed first, the Court chose to seek a report from the Chief Justice of J&K High Court as to whether it was accessible. This was to verify the claim made by the petitioner that SC was directly approached as the petitioners found it difficult to move the HC in view of the blockade.

It was again after four days that the Court issued notice in the petition and sought a report from the Juvenile Justice Committee regarding the allegations. The Committee was given a week time to submit the report.

A Court conscious of its constitutional duties would have given a decision either ways, at least in the habeas corpus petitions, by now.  The approach of the Supreme Court in these matters has unfortunately been evasive and apathetic.

This is just another episode of a trend which has been recurring for some time.  Of late, the Court has been adopting an evasive approach, whenever it was faced with matters of public significance, which are punctuated with political undercurrents.

This happened in the case of demonetization and electoral bonds.

After the announcement of demonitization in November 2016, several petitions were filed in SC challenging the decision. The petitions had raised substantial legal points such as whether the decision was unilaterally announced by the Government without the proper consultation of RBI Board. On November 25, 2016, the SC agreed to examine the constitutionality of the decision. The petitions are yet to get a hearing date, even as many commentators point out demonitization as a factor responsible for the economic slow down in the country.

Similar was the fate of the petitions challenging electoral bonds scheme. These petitions were filed soon after the passing of Finance Act 2017, which introduced the legislative amendments for the scheme. However, the case became alive only by March 2019, by which time most of the electoral bonds have been purchased. The failure to consider these cases timely is a grave concern, as the Election Commission of India itself has come on record saying that the scheme has dangerous impact on transparency in political funding.

Another remarkable feature of the UK Courts' hearing was its openness and transparency.

The hearings were completely live streamed. The written submissions of the parties were uploaded in the website. Also, important updates about the case were announced through the official twitter handle of the UK Supreme Court.

News from the Supreme Court of the United Kingdom. The case is available to view at: https://t.co/S1cIFNNUp5 pic.twitter.com/UbZ6Egue1l

This is a significant gesture underlining the democratic nature of the Court. It sends out a warm signal that the Court is not an elitist or exclusivist institution which shuns public participation.  Encourage public engagement with judicial process makes it more meaningful.

The Indian tendency to 'look up to the West' is said to be a sentiment arising out of centuries of colonial subjugation.

But in this context,  the UK Supreme Court has set a shining example, going by any standard of objectivity.