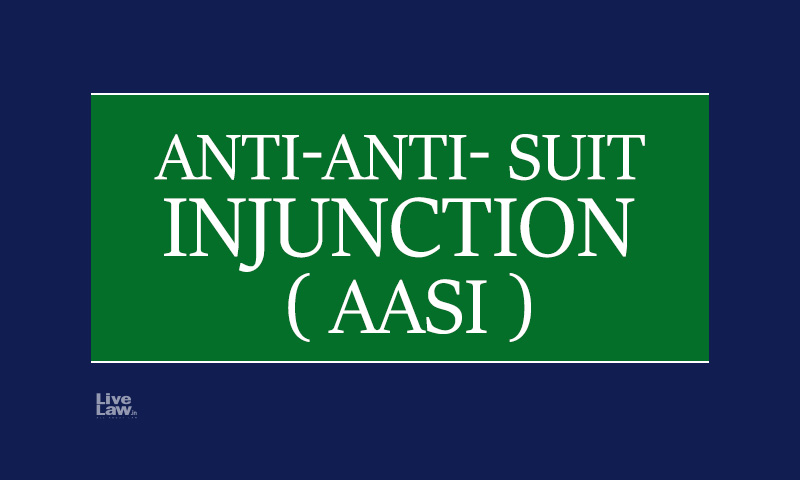 On 3rd May 2021, the Delhi High Court passed an interim anti-anti-suit injunction (AASI), India's first ever, in the case of Interdigital Technology Corporation and Others vs. Xiaomi Corporation (I.A. 8772/2020 in CS(COMM) 295/2020). The case was regarding the alleged use of technology of Interdigital's standard ssential patents (SEPs) by Xiaomi sans proper permission. The judgment,...

On 3rd May 2021, the Delhi High Court passed an interim anti-anti-suit injunction (AASI), India's first ever, in the case of Interdigital Technology Corporation and Others vs. Xiaomi Corporation (I.A. 8772/2020 in CS(COMM) 295/2020). The case was regarding the alleged use of technology of Interdigital's standard ssential patents (SEPs) by Xiaomi sans proper permission. The judgment, delivered by Justice C.Hari Shankar, ordered that the defendant, Xiaomi Corporation, shall remain restrained, during the pendency of the present suit, from enforcing, against the plaintiffs, Interdigital Technology Corporation, the order dated 23rd September, 2020, passed by the Wuhan Court, whereby Xiaomi was granted an anti-suit injunction against Interdigital.

Incogitable, you say? In a way, it is. An anti-anti-suit injunction effectively renders the anti-suit injunction of the foreign court null and void. When a court in a country grants the anti-anti suit injunction to the party that seeks it, it is indeed the court vouching for its countryman and emphasizing its sovereign authority. But what about the hoary tradition of comity of courts, according to which the courts of one country, give effect to the orders of courts in another country, not because they are bound to do so, but out of mutual esteem and courtesy?

The obvious answer to this would be that, why would the AASI have been necessary at all, if the Wuhan court has deliberated upon and declined to issue the anti-suit injunction, in the first place. The order of the Wuhan court blasted the timeworn doctrine of comity of courts into the shadows, and it was not without reason that it led to the grant of the first anti-anti-suit injunction in India.

Of course, the existence of an anti-suit injunction is a challenge to the very dominion of the court against whose jurisdiction the order has been passed. A challenge that will not be taken lightly by the majority of courts. And refusing the enforcement of an ASI, necessarily calls for the passing of an anti-anti suit injunction (AASI). But is there an end to this? What stops the court that issued the ASI, from rolling out an anti-anti-anti suit injunction (AAASI) in answer to the ASI. An example of an AAASI is GE Francona Reinsurance v CMM Trust No 1400 [2004] EWHC 2003 [10]. In theory the repartee could go on and on, with each court trying to overwhelm the other, in an intense bid to protect its powers. The AAASI has been the ceiling, as of now.

(a) the defendant, against whom injunction is sought, is amenable to the personal jurisdiction of the court;

(c) the principle of comity - respect for the court in which the commencement or continuance of action/proceeding is sought to be restrained - must be borne in mind.

A cautionary style would have been apt by the Wuhan court, when it is clear that no injustice would have been perpetuated to Xiaomi, had the ASI been declined to it. The Wuhan court would have done well to appreciate that the suit seized of by the Delhi High Court, concerned various matters for decision, concerning 6 patents filed in India by Interdigital, one of the points for decision being that of FRAND rate determination for these patents alone. Xiaomi's prayer before the Wuhan court is to determine the global royalty rates or the range for the licensing of all standard essential patents ("SEPs") and patent applications 3G, 4G patent portfolios that Interdigital holds or has the right to license. How the Wuhan court construed itself to be a better forum to determine the global royalty rates and thereby issued the anti-suit injunction, is not buoyed by sufficient reason. The present ASI, issued with scant regard for the comity of courts, has only served to usurp the jurisdiction of a court very well seized of the matter. The resultant AASI, and any further proceedings it would trigger, would now defeat the ends of justice for both parties.

The Court itself in Para 99 of the 3rd May 2021 AASI order highlights the fact that the suit before it concerns six of Interdigital's patents granted in India whereas the Wuhan complaint is apropos the entire portfolio of all SEPs held by Interdigital. It further states that "…unlike the Wuhan proceedings, the present suit does not concern itself with fixation of any global FRAND rate for the entire portfolio of the plaintiffs SEPs." Having observed so, evidently it would have been fitting that the Wuhan court, decide that the issues for determination in both suits are independent of each other, rather than issue an ASI to Xiaomi.

In Para 100 of the 3rd May 2021 AASI order, it is further observed that: "..There can be no question of exclusion of the jurisdiction of the Wuhan Court by the plaintiffs, in the present proceedings, for the simple reason that the Wuhan Court has no jurisdiction to adjudicate on the present suit or decide the issue in controversy raised therein, i.e. infringement, by the defendants, of the Indian suit patents of the plaintiffs." The Wuhan court, should have appreciated that it was the Indian patents of the plaintiffs in question here, with there being no overlap in both suits.

Further it is typical that intellectual property suits when determination of global issues are involved, would straddle various jurisdictions, even though either party would be able to pinpoint the jurisdiction of one specific court based of the country where the IP has been granted. It is upto the court seized with a prayer for an anti-suit injunction to decide on whether the matter is a fit case to issue an ASI and prevent multiple parallel litigations, or whether granting one would be akin to a sledgehammer that shatters any notion of comity or courts. Once a capricious ASI has been granted, one can hardly expect the second court, at whose power such ASI is directed, to sit quiet and not grant an AASI to uphold its sovereign power.

Anti-suit injunctions are here to stay. Prayers for anti-anti-suit injunctions, to override ASIs, are also going to become extremely relevant in the coming years. Courts would do well to refrain from issuing ASIs as a knee jerk reaction, whenever there is a parallel proceeding in the second court, without a proper review of both suits. Courts around the world would be required to display incredible tolerance when seized of an ASI suit. Else, improperly granted ASIs would naturally lead to an AASI that may place both courts on a direct collision path. Forbearance is the need of the hour, if the situation is not to end up a chaotic one, and turn out to be a punch in the gut for the concerned industry or generate trade disputes between nations.

(The author was a Member, erstwhile Intellectual Property Appellate Board (IPAB). The views are personal.)