What Has Happened A Year After Bhima Koregaon Arrests? 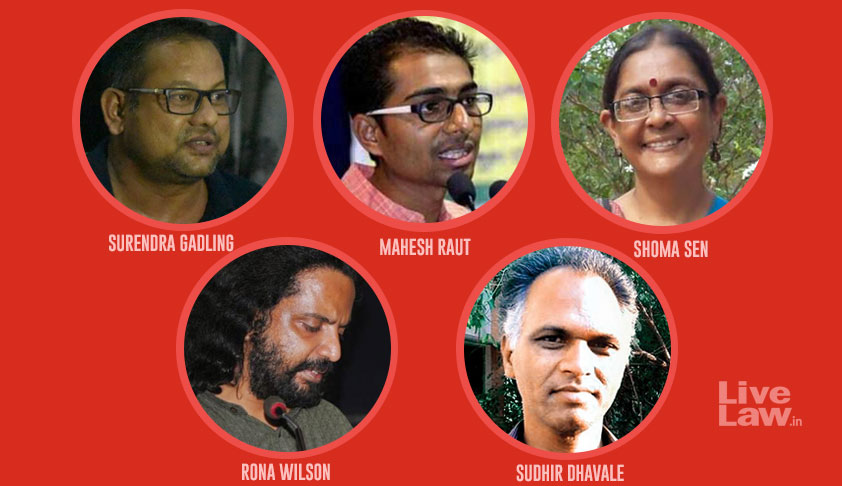 x
While the investigation in the FIR against Dalit activists witnessed high action, with country wide hound for academic-activists and dramatic press conferences, similar zeal is palpably missing in the other FIR against right-wing outfits.

It was exactly a year ago that the Pune police arrested five activists for alleged Maoist links in the Bhima-Koregaon case. Surendra Gadling, a Nagpur-based advocate who had taken up cases of several UAPA accused, Sudhir Dhawale, Dalit activist-writer and founder of Republican Panthers, Mahesh Raut, a TISS alumnus working on tribal rights in Gadchiroli, Shoma Sen, a retired professor of...

It was exactly a year ago that the Pune police arrested five activists for alleged Maoist links in the Bhima-Koregaon case.

Surendra Gadling, a Nagpur-based advocate who had taken up cases of several UAPA accused, Sudhir Dhawale, Dalit activist-writer and founder of Republican Panthers, Mahesh Raut, a TISS alumnus working on tribal rights in Gadchiroli, Shoma Sen, a retired professor of Nagpur University and Rona Wilson, a Delhi- based activist working for rights of political prisoners, were arrested on June 6 last year.

All of them are still behind bars in Pune's Yerwada jail, with their bail applications pending. Though the chargesheet has made a grave allegation that the activists were plotting a Rajiv Gandhi style assassination of the Prime Minster with the aid of Maoists, the case has not seen much progress in Court.

The arrests were made by Maharashtra police as part of the investigation in Bhima-Koregaon violence of January 2018. The incident took place on the new year day of 2018 when Dalits participating at a commemoration event of the Bhima Koregon battle - in which the forces of the Peshwa, ruler of Pune, were defeated by the British East India Company - came under attack from Hindutva outfits. While Dalits see the victory as an assertion of their identity as the British forces had included Mahar (a formerly untouchable caste) soldiers, some Hindutva right-wing organisations were opposed to the celebration.

This led to skirmishes between Dalits and right-wing outfits, with both sides alleging that the violence was started by the other group. Two FIRs were registered by Pune police based on allegations and counter-allegations.  The first FIR named Sambhaji Bhide, chief of Shiv Paristhan and Milind Ektobe, chief of Hindu Jagran Samithi, as the main accused.

After that, another FIR was registered on the allegation that violence was initiated by Dalit activists. It alleged that the violence was incited by inflammatory song and dance performances made by Kabir Kala Manch at the Elgar Parishad meeting held in Pune on December 31,2017. The FIR recorded certain alleged inflammatory statements, which are actually Marathi translation of verses from the German play "The Good Persons of Szechwan" by Betrolt Brecht. The performance by Kabir Kala Manch during the Elgar Parishad acted on verses from the German play such as "When injustice is done there should be a revolt in the city. And if there is no revolt, it were better that the city should perish in fire before the night falls".

The police took this as clarion call for violence against State. Notably, two retired judges had participated in the Elgaar Parishad meeting: one of them, Justice PB Sawant is a former judge of SC and the other Justice BG Kolse Patil is a former judge of the Bombay High Court.

The police claimed that the investigation into the case unearthed evidence linking the arrested activists to Maoists insurgents, who were plotting to "to assassinate Prime Minister Narendra Modi and to procure arms and ammunition to wage a war against the country". The arrests were based on electronic evidences allegedly seized from them, including e-mails and word documents, in which they had allegedly detailed their plans to assassinate the PM.

The letters were leaked to media, triggering a sensational media trial of the accused, though doubts were expressed by few about police claims. Many wondered whether terrorists could be expected to be so naive as to leave self-incriminating electronic trail behind with exact details of their plots.

Despite the allegations being serious, the police did not file chargesheet within the mandatory period of 90 days. There was a legal controversy regarding the extension of time by 90 more days which was granted by the Pune Sessions Court to police to file chargesheet. The Bombay High Court held that time could not have been extended, as the extension application under Section 43D of UAPA was filed by the investigating officer and not the prosecutor. This would have paved the way of release of the activists on the provision of 'default bail' - i.e. release of accused on bail upon failure of police to submit final report within the stipulated time. However, the Supreme Court stayed the Bombay High Court order on October 29 . Later, in a judgment delivered on February 13, the apex court upheld the trial court's extension.

Meanwhile the police filed chargesheet against them in November 2018.

On August 28, the Pune police carried out country-wide arrests of five more activists in the case.

Within hours after the SC admitted the petition on August 29 and stayed the transit of arrested activists from their homes to Pune, the Joint Commissioner of Pune Police addressed a press conference, stating that police had sufficient evidence.  On August 31, the ADG of Maharashtra police held a press briefing, where several letters were flashed to media to suggest that the arrested activists were involved in a plot to assassinate the Prime Minister.

Even though there was no allegation on record that these activists were involved in PM assassination plot, the police made an attempt to create a public impression in that regard through their media briefings, fueling the narrative of 'urban naxals' in social media.

Months before the arrest of Sudha Bharadwaj, a letter attributed to her was flashed in Republic TV on July 4, to create the impression that she had links with Maoist organizations.

Arnab Goswami claimed in the program that Bharadwaj had written a letter to a Maoist- one "Comrade Prakash"- stating that a "Kashmir like situation" has to be created. Bharadwaj denied writing the letter as alleged, and stated that the source of letter was not revealed in the program. She also expressed surprise as to how a document purporting to contain evidence of serious crimes happened to surface first in the studio of Arnab Goswami. Curiously, this letter was cited by the police two months later to justify Bharadwaj's arrest.

The over zeal shown by the police to paint Sudha Bharadwaj and four others as involved in the PM assassination plot, despite there being no such allegations in the case records, did create doubts about their impartiality in the matter.

On September 28, the Supreme Court dismissed the plea for SIT probe, with Justice Chandrachud dissenting from the majority opinion of the three judge bench.

On February 1, Anand Teltumbde joined the list of academicians to get arrested in the case. A supplementary chargesheet against Bharadwaj and others was submitted in February this year.

Different yardsticks in the other FIR

While the investigation in the FIR against Dalit activists witnessed high action, with country wide hound for academic-activists and dramatic press conferences, similar enthusiasm is palpably missing in the other FIR against right-wing outfits.

Sambhaji Bhide, who is named as accused no.2 in the FIR, has not been even arrested so far. Milind Ektobe, the first accused, has been granted bail. A petition is pending in Bombay HC seeking proper investigation of the case against Bhide and Ektobe.

In contrast, those belonging to the opposite end of political spectrum are still languishing in jail facing terror charges.

Even after 60 hearings, their bail applications have not been decided by the Sessions Court, said Nihal Singh Rathod, the defence lawyer. On nearly 40 posting dates, the police failed to produce the accused before the Court citing difficulties in arranging security, Rathod added, leading to delays.

Given the graveness of allegations concerning national security, an expeditious trial by a special court would have been a logical response.  Unfortunately, such an approach is not seen in this case so far.