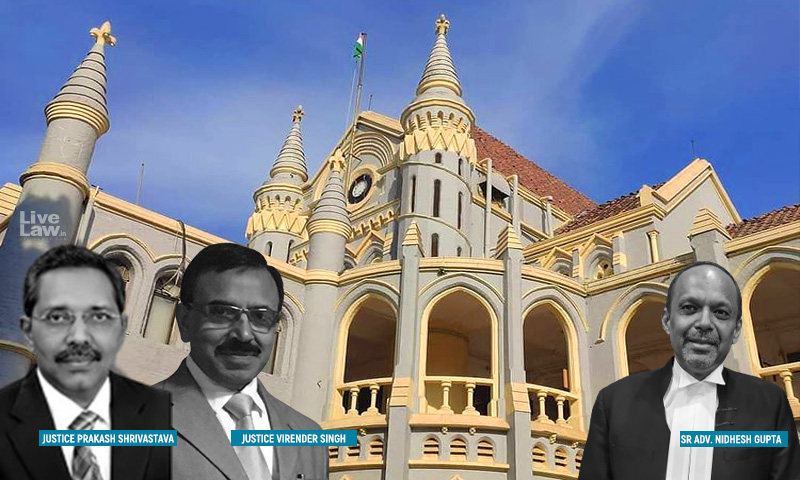 While reserving order on interim relief on a plea by 4 Legal Journalists who have moved the High Courts seeking permission for Live-reporting, the Madhya Pradesh High Court on Wednesday that it is undisputed that journalists have a right to report and access to Court proceedings going live.

A Division Bench of Justice Prakash Srivastava and Justice Virender Singh orally observed that the Right to Live report the court proceedings cannot be disputed, however, the bench also remarked that the matter could be sent to the E-Committee as a representation of the Journalists so that it could take a concrete decision on this matter.

The petitioners were represented by Senior Advocate Mr. Nidhesh Gupta assisted by Advocate Manu Maheshwari. Mr. Aditya Adhikari, Senior Counsel, appeared for the High Court of Madhya Pradesh which is the respondent.

Justice Prakash Shrivastava: The E-committee of the High Court is actively considering the aspect of Live Reporting and once the live streaming starts then the journalists, litigants and everybody would have easy access to the Court's proceedings. Therefore, let the E-committee take the decision, which is in the process of doing and evolving a mechanism.

Sr. Advocate Nidhesh Gupta: The whole issue is about the arrangement in the interregnum. Live-streaming of all the Courts for the journalists and the litigants to attend may take a while or maybe a much longer time, so, on the meanwhile, the journalists must be permitted to attend the live hearings of the Courtroom proceedings in the matters they want to attend.

Mr. Gupta also argued that since there is no mechanism or arrangement, which may enable the Journalists to join easily the Court proceedings, they have to join with false identities or pseudo-names.

He also submitted that it is a question of rights under Article 19(1)(a) and that Live-streaming is an entirely different issue from the right of journalists to access live proceedings and to report them on a real-time basis and the two be not confused by the Court.

Justice Prakash Shrivastava: Tell us where is this right expressly provided to the journalists under the Constitution, the Judgment of Swapnil Tripathi is about live-streaming and in so far as access to journalists is concerned, the E-committee is in the process of revising the Rules. You will have to make out an immediate case of denial of the fundamental right to report to the journalists for claiming interim.

Sr. Advocate Nidhesh Gupta: The Supreme Court in the Chief Election Commissioner Case, in a Bench led by Justice Chandrachud, has clearly held that the journalists have a right to report even dialogues, discussions, oral observations of the Bench as they constitute part of the 'Court Proceedings' and resultantly, are covered within the ambit of freedom of speech under Article 19(1)(a).

Sr. Advocate Nidhesh Gupta: It would be a complete abdication of duty on the Court's part if in judicial proceedings a rule is being challenged (Rule 16 in this case) and the High Court refers it to the administrative side to be decided by some Committee.

Mr. Gupta further argued that if the rule is challenged on the judicial side in judicial proceedings, the challenge has to be dealt with and adjudicated on the grounds of challenge and cannot be referred to the administrative side. Therefore, there is no question of referring the matter to the E-committee and the prayer for interim relief must be decided on the anvil of Article 19(1)(a) and the judgments of the Supreme Court in Swapnil Tripathi and CEC Cases.

Arguments made by the High Court's Counsel

Stressing that the process of law cannot defeat the purpose of the law, Mr. Gupta argued that Section 327 CrPC and 153 (B) CPC clearly mandate the Court proceedings to be open and that the Video Conferencing Rules cannot come in the way to defeat the purpose and objectives of these provisions and make virtual Courts opaque.

Further, when Mr. Adhikari (for the High Court) said that he received the copy of the petition yesterday only, and he needed to file a detailed reply to the present petition, which will take time as there is a challenge to the Video Conferencing Rules, Mr. Gupta informed the Court that the High Court was served with the advance copy on May 24, 2021 and it had been almost 17 days since they were served.

Importantly, Mr. Gupta remarked that the matter has been circulating throughout on social media & widely reported and even all the Judges and Advocates know about these proceedings. The High Court should behave like a model litigant having responded timely.