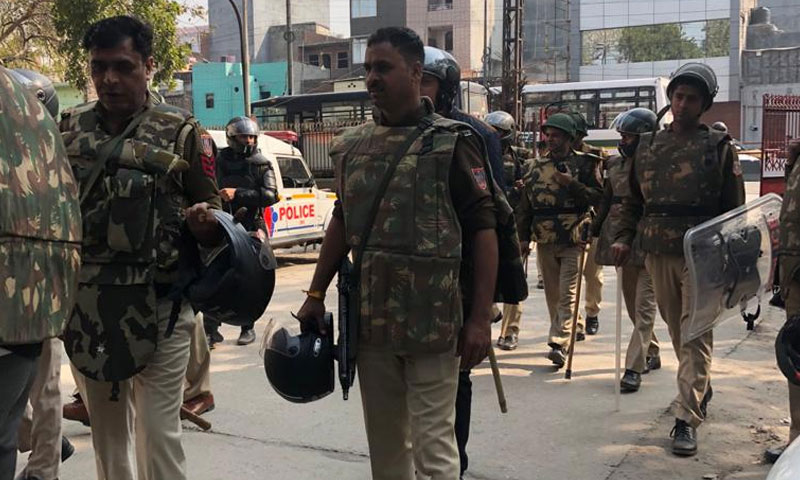 A petition has been filed before the Madhya Pradesh High Court seeking constitution of specialized Committee to address the concern of rising "communalism" within the Police force in the state. The petition, filed by one Deepak Bundela, a practicing Advocate of the High Court, also seeks constitution of a "Police Complaints Authority" in the state. Bundela has moved the High...

A petition has been filed before the Madhya Pradesh High Court seeking constitution of specialized Committee to address the concern of rising "communalism" within the Police force in the state.

The petition, filed by one Deepak Bundela, a practicing Advocate of the High Court, also seeks constitution of a "Police Complaints Authority" in the state.

Bundela has moved the High Court through Advocate Ehtesham Hashmi, alleging that he was brutally assaulted by a mob of policemen, including one Kapil Saurashtra, who apparently mistook Bundela to be a Muslim.

He has submitted that while he was going to the Hospital to fetch his medicines for acute diabetes and blood pressure, Saurashtra stopped him at the strength of a Section 144 order that was in force and thereafter abused him as well as the Indian Constitution. The incident was followed by a brutal assault on the Petitioner's person.

On a later date, it is alleged, two policemen namely BS Patel Souni and Raghuvanshi visited the Petitioner's house on the premise of recording his statement about the incident but, they instead tried to manipulate the Petitioner by urging him to take back his complaint.

During their visit, the plea states, the two policemen disclosed that Saurashtra, being a staunch Hindu, mistook the Petitioner to be a Muslim and the entire incident was therefore a misunderstanding.

As per the plea the two policemen said,

"We do not have any enmity against you. Whenever there is a Hindu-Muslim riot, police always supports the Hindus; even Muslims know this. But whatever happened with you was because of ignorance. For that, I have no words"."

The Petitioner has thus moved the High Court, seeking the aforementioned remedies, in addition to an adequate enquiry against the delinquent police personnel.

He has contended that the Respondents have acted in violation of Article 15(1) of the Constitution and have constituted offences under Sections 323,324,341,293 and 506 of IPC.

"There has been growing incidents of police brutality in the state and country and with the facts it is clear that there is communal elements present in the police force, police force as an instrumentality of state has to uphold the constitutional values and discrimination on the basis of religion by the police is against the mandate of the constitution of India, under no circumstance state instrumentality can not violate article 15 that is guaranteed by the Constitution of India," the plea states.

It is alleged that the Petitioner was wrongfully restrained by the police as even though Section 144 was in force, there was no restriction and curfew on individual movement.

It is stated that the Petitioner has apprised the Superintendent of Police of the said incident however a FIR in this regard has not been registered. Accordingly, a prayer has been made to direct the concerned SP to register the FIR in the matter and also to provide him adequate police protection.

Obhan & Associates Act On Okinawa Autotech's Joint Venture With Tacita
Latest News
+ More
1Past Service Not Forfeited For Calculation Of Pensionary Benefits If Subsequent Govt Job Is Taken With Permission From Competent Authority: Madras HC
2S. 108 Customs Act | Managing Directors Of Companies To Be Summoned Only When Authorized Representatives Are Not Cooperating: Gauhati High Court
3Courts Must Exercise Discretion To Condone Delay In Filing Written Statement After Due Circumspection: Punjab And Haryana High Court
4Gujarat High Court Weekly Round Up: May 16 To May 22, 2022
5Allahabad High Court Weekly Roundup: May 16 To May 22, 2022
6Bombay High Court Weekly Round Up : May 16 To May 22,2022
7'Continuing Unlawful Activity' For Gaining Advantages Other Than Economic Or Pecuniary Is Also An "Organised Crime" Under MCOCA: Supreme Court
8"Majority Of Parents Blame Daughter In Law If Their Son Dies Untimely": Allahabad HC Orders Compassionate Appointment For Widow
लाइव लॉ हिंदी
+ More
International
+ More
1Abortion Laws In The US And Other Countries
2Leaked Draft Judgment Of US Supreme Court Indicates Overruling Of Roe v.Wade Abortion Rights Decision
3The Indian Connection With Pak Decision To Live-Stream Court Proceedings
4Russian Suspension At The Human Rights Council: Band-Aid On A Bullet Wound?
Environment
+ More
1Supreme Court Permits E-Rickshaws In Matheran As Pilot Project To Check Feasibility
2In Case Of Doubt, Protection Of Environment Would've Precedence Over Economic Interest: SC Revokes Approval For Doubling Castlerock to Kulem Railway Line
3NGT Bars Auroville Foundation From Township Construction Till Environmental Clearance Is Obtained
4Ghazipur Landfill Fire: NGT Says Dump Sites In Cities Are Like 'Time Bombs', Constitutes Joint Committee Headed By Former Delhi High Court Judge