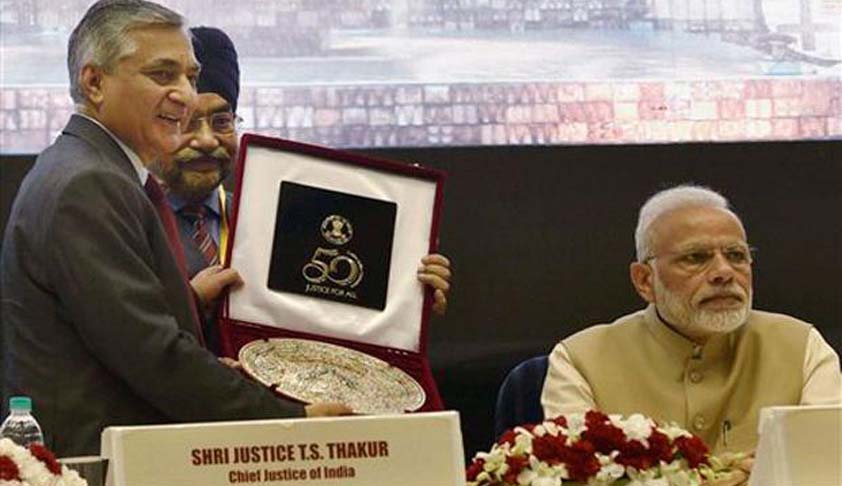 Setting the stage for an explosive war of words, the Delhi High Court brought the Centre and the judiciary together on a table and threw in Arvind Kejriwal and Najeeb Jung with them to celebrate 50 glorious years of the high court.To the dismay of many, the stage didn’t quite explode but there surely were some friendly neighbourhood firecrackers.The event held at Vigyan Bhawan was presided...

Setting the stage for an explosive war of words, the Delhi High Court brought the Centre and the judiciary together on a table and threw in Arvind Kejriwal and Najeeb Jung with them to celebrate 50 glorious years of the high court.

To the dismay of many, the stage didn’t quite explode but there surely were some friendly neighbourhood firecrackers.

The event held at Vigyan Bhawan was presided over by Prime Minister Narendra Modi and attended by Chief Justice of India TS Thakur and other judges of the Supreme Court and the high court in attendance today.

The high court has surely come a long way from 31 October, 1976, and most of that was displayed to the public through a documentary. Here’s a takeaway on who said what today:

“There is a ‘widespread’ fear that the phones of judges are being tapped and if it is true, then it is the biggest assault on the independence of the judiciary.”

“During my meetings with judges, I have overheard them telling each other that they should not talk on phones because they could be tapped. I told them the phones of judges cannot be tapped, and they retorted by saying that all phones could be tapped. I don't know whether it is true or not but there is a widespread fear. If it is true that phones are tapped then, judges can be influenced...."

“I deny with all authority at command the allegations that phones of judges have been tapped.”

“Independence of judiciary is fundamental, impeachable and uncompromising for the Narendra Modi government.”

“As IT Minister & Law Minister, it is very heartening for me to see the great contribution made by the Delhi High Court in digital services.”

“Delhi High Court has produced some of the finest judges of India. Justice HR Khanna stands tallest among them.”

"We need to introspect about public perception about our rectitude. It is painful to see sometimes aberrations occurring at some level or the other which bring disrepute to entire justice system.”

"I think the Delhi High Court has achieved much, but in terms of ensuring that such incidents do not happen, there is much more to be done. I only hope that brother judges at all level take extra care not to give any room for any doubt or anything that is not in tune with judicial ethics and professional rectitude.”

“Government is the biggest litigant. The judiciary spends its maximum time on us. ‘Us’ does not mean Modi, but the government.”

“If a teacher approaches court over a service matter and wins, then the judgment should be used as a yardstick to extend the benefit to thousands of others to reduce litigation at a later stage.”

“I know it is controversial, the issue of an All-India Judicial Service, but it should also be debated. Debate is the essence of democracy.”

“Challenges come, but formulating ways to overcome those challenges should be our resolve.”

“While drafting laws, our motive must be to imbibe best of the talent inputs. This will be the biggest service to judiciary.”

“Although I have never experienced, I have heard that the atmosphere inside a court room is very serious, how it is here today, we are celebrating so it is okay for us to smile a little.”

“Every person involved has contributed to the glorious 50 years of the Delhi High Court. The judges, litigants, photocopy guy and even a chaiwalla.”

“We have to thank Chief Minister Arvind Kejriwal for giving us funds every time we wanted to expand infrastructure in courts.”