Rafale Hearing-"If The Pricing Can't Be Shared, File An Affidavit To That Effect":CJI Gogoi To AG KK Venugopal [Courtroom Exchange] 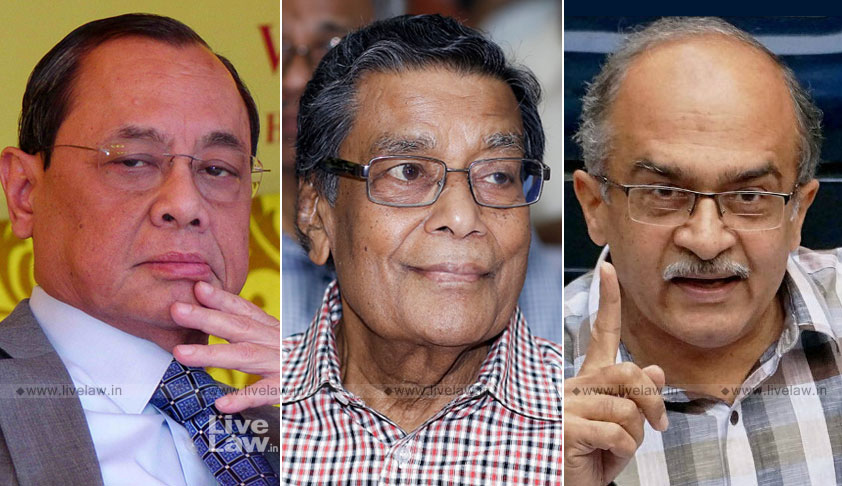 The Supreme Court bench of Chief Justice Ranjan Gogoi, Justice U. U. Lalit and Justice K. M. Joseph on Wednesday required the Centre to apprise it of the details as to the pricing and cost of the 36 Rafale fighter jets sought to be procured from Dassault under an inter-governmental agreement with France, the advantages thereof, if any, in a sealed cover in the next ten days.

On October 10, the court had considered two PILs by Advocates M. L. Sharma and Vineet Dhanda regarding the Rafale deal. The bench had sought from the Attorney General the details of the steps involved in the decision leading to the new deal. The CJI led bench had, however, clarified that the details so sought would not cover the pricing or the suitability of the equipment for the Indian Air Force, bearing in mind the sensitive nature of the matter.

Also listed on Wednesday was Aam Aadmi Party MP Sanjay Singh’s petition. Former Union Ministers Yashwant Sinha and Arun Shourie, along with lawyer Prashant Bhushan, have filed a PIL in the Supreme Court for registration of FIR and investigation by CBI into the Rafale deal.

On Wednesday, the bench allowed the contents of the note giving the details of the steps in the decision-making process leading to the contract for 36 Rafale jets to be furnished to the Counsel for the petitioners and the petitioners-in-person.

The Chief Justice remarked, “we have gone through what had been given to us. Mr. Attorney, Mr. Solicitor, we are proposing to pass an order. Please listen to us carefully”.

“At this stage, we would not like to record any findings or view with regard to the contents (of the aforesaid note). Rather, we are of the view that the information in the confidential report can legitimately be brought in to public domain. Along with the said facts, further details with regard to the induction of the Indian Offset Partner (if any) be also furnished to the counsel of the petitioners and the petitioners-in-person....the parties may file their responses as to the information conveyed within the next 7 days....”, the Chief proceeded to dictate the order.

The bench also noted that “At the outset, we would like to observe that in none of the PILs the suitability of the equipment and its utility to the Indian Air Force has been questioned. what has been questioned is the bonafides of the decision making process and the price”.

When Attorney General K. K. Venugopal objected that some of the information contained in the report directed to be shared with the petitioners is covered under the Official Secrets Act, the Chief Justice drew his attention to the dictated order excluding from being furnished at the present stage “Such of the details which are considered to be strategic and confidential”.

Further, the AG advanced that the details of Pricing have not even been laid down before the Parliament. “if pricing is something exclusive that you are not sharing, file an affidavit to that effect. State on affidavit that you cannot furnish those details”, said Chief Justice Gogoi.

When the Advocate for petitioner Sanjay Singh countered that the government of India has disclosed the pricing in the Parliament, the Chief Justice commented in a lighter vein, “You know the price? Please Intimate us. We will all be fortunate”.

Earlier, Chief Justice Gogoi had said to Singh’s counsel, “Who is Sanjay singh? What is his interest? There are so many PILs already! You are getting the information and the right to respond! What more do you want? A CBI or SIT probe at this stage?”

Also, Mr. Bhushan invited the bench’s attention to the plea for investigation by the CBI into the complaint against several high public servants in connection with the Rafale deal- “Let the CBI inform the court as to what they have done about the complaint. It has been four weeks”

“We have noted that your first prayer is for a CBI probe.Let the CBI put its house in order first That you will have to wait for”, stated the Chief Justice.

According to Mr. Sinha, Shourie and Bhushan, in 2007, after going through the requisite procurement procedures at various levels, tenders were issued by the Ministry of Defence for the purchase of 126 fighter aircrafts and it was specified in the Request for Proposal that 18 of these aircrafts would be purchased from abroad in a ‘fly-away’ condition and the remaining 108 would be manufactured in India in the factory of Hindustan Aeronautics Limited (HAL) with transfer of technology from the foreign vendor. After the financial bids, Dassault Company manufacturing the Rafale aircraft was declared the lowest tenderer and thereafter price negotiations began. These negotiations were at a very advanced stage (95% complete) by 25 march 2015, states the petition.

However, when the Prime Minister visited France in April 2015, a new deal was announced to purchase only 36 Rafale Aircrafts in a ‘fly-away’ condition without any transfer of technology and make in India. It later turned out that the new deal involved 50% of the value of the contract to be given as “offset contracts” to Indian companies and that the government informally told Dassault and the French government that the bulk of the offset contracts would have to be given to the Reliance Aerospace Ltd. (RAL) company of Mr. Anil Ambani.

This act of unilaterally changing the deal by bypassing all laid down procedures was to ensure that Mr. Ambani could be brought in as an offset partner for the purpose of obtaining for him offsets worth thousands of crores, alleges the petition.

The new deal gives undue benefit to RAL and the escalation of price of airplanes is to account for collateral considerations, alleges the petition. This would amount to “Criminal Misconduct” under section 13(1)(d)(ii) of of the Prevention of Corruption Act, as applicable on the date of commission of offence.