[Sabarimala][Day-8 Session-1] How Does Article 14 Apply In This Case? SC Asks Petitioner 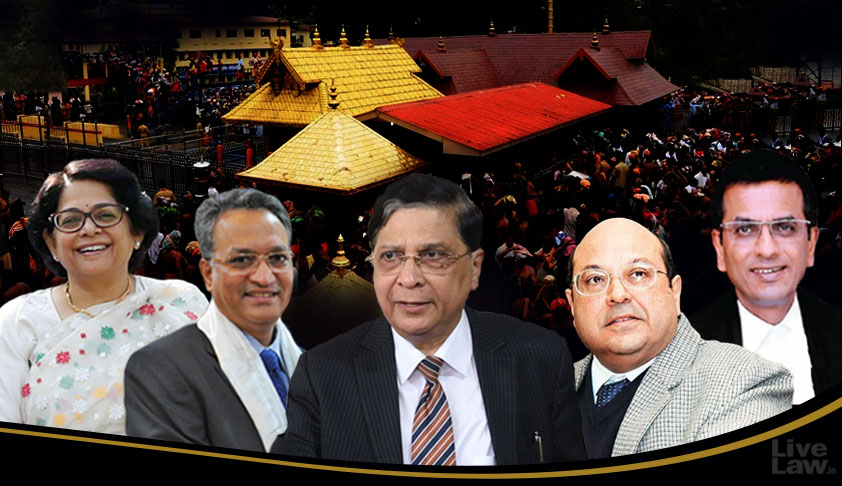 As the hearing in the Sabarimala Temple entry case spilled in its eighth day, Amicus Curiae K. Ramamoorthy supported, as being a age-old customary practice rooted in ardent religious beliefs associated with the Temple, the restriction on accessing the temple by menstruating women between the ages of 10 and 50 years.

He placed reliance on the 1986 apex court judgment in Bijoe Manuel v. State of Kerala- Three children belonging  to a sect called Jehovah's Witnesses, who worship only Jehovah-the Creator and none other, were expelled from school for refusing to sing the National Anthem: 'Jana Gana Mana'. It was their belief that it is against the tenets  of  their  religious  faith-not  the  words  or    the thoughts of the National Anthem-but the singing of it; they  used  to, however, stand up  in respectful silence daily, during the  morning assembly when the National Anthem was sung. The court had held that the  expulsion of  the three children from  the school  for the  reason of their conscientiously held religious faith, is a violation of the fundamental right to freedom of conscience.

In the light of the seven-judge bench decision in Shirur Mutt (1954), he submitted that the right to freely practice one’s religion under Article 25 should construed harmoniously with the right of a religious denomination to manage its affairs under Article 26.

When Justice Indu Malhotra inquired how in certain instances women have been allowed to enter the shrine through its northern entrance, where the rituals of placing the irumudikkettu on the head and taking the 18 holy steps are not observed, Mr. Ramamoorthy asserted that the same was an anomaly and not the rightful practice.

He rebutted the argument that the impugned practice came in the teeth of Article 14, the obligation under the provision being on the State within the ambit of which the religious institution did not fall.

Advancing that the impugned Kerala Hindu Places of Worship (Authorisation of Entry) Rules were enacted by the state government itself, he imputed the changed stance of the state of Kerala before the Supreme Court to political influences.

As he Commenced his rejoinder submissions, Advocate R. P. Gupta faced tough questions from the bench- if the petition could have its basis in Article 14 as the impugned practice was claimed to be protected under Article 25(1) and purported to be in pursuance of the rights of a religious denomination; and whether there could be said to be discrimination on the basis of sex, considering the ‘Naishtika Brahmacharya’ status of the deity and its right to protect the same.

In context of the ‘perpetual celibate’ character of the deity in the Sabarimala Temple being the basis of the impugned practice, the bench leaned on the findings of the Kerala High Court in S. Mahendran v. Travancore Devaswom Board.

In her turn, Senior Counsel Indira Jaising was asked how there could be said to be discrimination based on sex for the purpose of Article 15, considering the Article does not speak of prohibition on access to places of worship.