[Section 377] [Day-2, Session 2] ‘Sex’ Shall Be Interpreted As ‘Sexual Orientation’ For The Purpose Of Article 15 To Remove Discrimination Against LGBTQ Community: Anand Grover, Shyam Divan 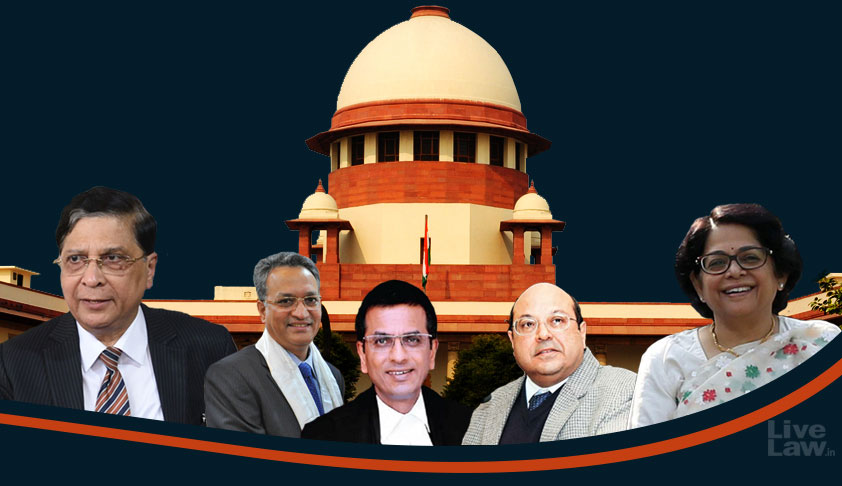 As the hearing in the challenge to the constitutionality of section 377 of the IPC resumed post lunch, Advocate Maneka Guruswamy advanced that the provision could not be said to be a reasonable restriction for the purpose of Article 19.In this behalf, she cited the 2010 apex court judgment in S. Khushboo v. Kanniammal, where the freedom of speech and expression of the appellant, having voiced...

As the hearing in the challenge to the constitutionality of section 377 of the IPC resumed post lunch, Advocate Maneka Guruswamy advanced that the provision could not be said to be a reasonable restriction for the purpose of Article 19.

In this behalf, she cited the 2010 apex court judgment in S. Khushboo v. Kanniammal, where the freedom of speech and expression of the appellant, having voiced her support for the societal acceptance of pre-marital sex and live-in relationships, was adjudged.

Justice Rohinton Nariman noted that this was the case where ‘morality’ as an exception under Article 19(2) was discussed.

However, ASG Tushar Mehta opposed the right of the sexual minority under Article 19(1)(c) to form associations.

“She is well within her right to argue...if you have an objection, you answer...”, echoed the Chief Justice and Justices Nariman and Chandrachud.

When Mr. Mehta sought to submit that the order dated January 8 making the reference to the constitution bench was confined to section 377, the Chief Justice asserted, “suppose section 377 is read down (subject to the prohibition on bestiality and incest), the right to form an association would flow from it...because earlier it was a crime, there could be no associations...but if the criminality is removed, you can meet each and have dinner together...(‘and register the association’, chipped in Dr. Guruswamy)...Any disqualification based on section 377 is bound to have been automatically lifted if section 377 is struck down...”

To stress on the plight of the LGBT community, Dr. Guruswamy, on Wednesday, also indicated section 164(1)(d) of the Companies Act, 2013, in as much as it disqualifies from appointment as Director any person who has been convicted of an offence involving moral turpitude.

“We have relied on the judgments of each of Your Lordships...because this is a plea by 6-8% of the Indian population to be regarded as full citizens and not unconvicted felons...”, she urged.

“This matter is not merely about the reading down of section 377...it seeks the constitutional interpretation envisaged under Article 145(3)...it involves the collective conscience of this country...”, she concluded.

In his turn, Senior Counsel Anand Grover advanced that the present petitions are not simply about the decriminalisation of an act, but about constitutional values of justice, liberty, equality and fraternity as contained in the Preamble.

Describing the language of section 377 and the Explanation appended to it as “vague”, he juxtaposed it with sections 361 and 362 of the 1837 draft of the penal code, which also dealt with unnatural offences- “the earlier provisions made a distinction between touching with consent and without consent, while the IPC has clubbed both”

When CJ Misra suggested that section 375, on Rape, as it stands after the 2013 amendment not be touched, the Senior Advocate that he is only using section 375 to attack section 377, and that the former now embraced within itself the acts, if non-consensual, which were read into section 377.

“Absolutely! (Penetration into) Mouth, urethra or anus which was earlier considered to fall under section 377, now attracts section 375, if without consent...the legislature does not see it as being against the ‘order of nature’...also, there is no intelligible differentia between whether the act is performed homosexually or heterosexually...”, elaborated Mr. Grover.

Citing the factor of changing times, considered by the Supreme Court in Anuj Garg (2007), he contended that one may argue there is no intelligible differentia in the classification so made. Further, relying on Deepak Sibal v. Punjab University (1989), it was submitted that if the objective is illogical, then the classification would also be unreasonable for the purpose of Article 14.

“You are saying that Article 15 is violated at the moment the (2013) amendment was made...you are implying discrimination on the basis of sexual orientation...you want us to read ‘sex’ as ‘sexual orientation’...”, reflected Justice Nariman.

The Senior Counsel indicated the landmark ruling of the UN Human Rights Committee in Toonen v. Australia (1994), where sexual orientation was held to be included in the antidiscrimination provisions as a protected status under the International Covenant on Civil and Political Rights.

“One of the main issues is denial of access to justice...”, he advanced, referring to Anita Khushwaha v. Pushap Sudan (2016).

“Gay men are suffering from blackmail and extortion...there are instances where they meet people on dating apps who extort money from to them in lieu of not exposing them...in one particular case, a doctor had approached the police, but ended up being arrested...”, he continued.

Mr. Grover also read out the statement made in the Allahabad High Court by Dr. Ramchandra Siras, a former professor at the Aligarh Muslim University, in which he had admitted to being a homosexual. “Naz Foundation (2009) gave him the courage to say that he is gay and that what went on behind his bedroom doors was covered under his Article 14 and 21 rights”, he submitted.

“Consensus is an inseparable facet of choice. What may be natural to ‘X’, ‘Y’ and ‘Z’ may not be natural for another...also, you are saying that if section 377 remains in the statute book, it will have an impact on the right to dignity which the Constitution protects”, summarised the Chief Justice.

Thereupon, Advocate Jayna Kothari advanced a brief argument on how the rights of transgenders, recognised by the apex court in the NALSA judgment, would not actualise until section 377 is struck down- “transgenders are commonly suspected of the offence under section 377...my client was born as a male, but identifies herself as a female...she is married, but if she indulges in any sexual activity with her husband, section 377 would come into play”

She also discussed how the provisions of the now repealed Criminal Tribes Act of 1871, viewing Transgenders as suspects of kidnapping and castration of children, were subsequently introduced in the Karnataka Police Act, 1963 and the Telangana Eunuchs Act, 1919.

“A declaration from the court will remove all the ancillary disqualifications for people joining services, contesting elections as it will no longer be seen as moral turpitude”, remarked Chief Justice.

Setting out the reliefs, he prayed that the right to intimacy be expressly read into Article 21; that a Declaration be made to the effect that the Constitution proscribes discrimination on the grounds of gender identity and sexual orientation; and that ‘sex’ be interpreted as ‘sexual orientation’ for the purpose of Article 15(1) and (2).

“There may be no discrimination in education, housing, health care on the basis of sexual orientation”, he submitted.

For the perusal of the bench, he discussed the definitions assigned to the phrases ‘gender identity’ and ‘sexual orientation’ in the NALSA judgment.

He threw light on how the members of LGBT community are “invisible” until they develop relationships, upon which they become “visible” to the society and the State; the “shadow of criminality” cast upon them and their treatment as “second class citizens”.

“Article 377 should have a higher threshold of scrutiny”, he advanced.

in the written submissions Mr. Divan submitted as follows;

"As purely biological determinants, “sex” and “sexual orientation” are two different concepts. However, it is respectfully submitted that the word “sex” should be understood not simply as a biological fact, but also as a socially-constructed identity (what some scholars call “gender”). For example, in Walter Alfred Baid v Union of India, AIR 1976 Del. 302, when considering a constitutional challenge to a Nursing College’s decision only to admit women, the High Court of Delhi held that the word “sex” under Article 15(1) applied to legislative classification that was undertaken not only on the basis of biological sex, but also on the basis of factors “arising out of” sex, or what sex “implied.” This understanding was clarified by this Hon’ble Court in Anuj Garg v Hotel Association, supra, where it was held that if legislation perpetuated stereotypes about gender roles, it would fail scrutiny under Articles 14 and 15(1)".

By reading “sexual orientation” into “sex” on the basis of the above submissions, it is respectfully submitted that this Hon’ble Court will not be engaging in rewriting the Article, or inventing new doctrine".

Mr. Diwan shall resume his arguments on Thursday.