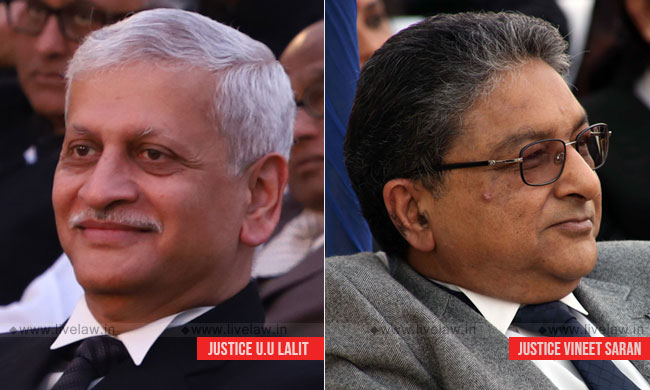 Applying the principle that an executing Court cannot travel beyond the relief granted in a decree, the Supreme Court held that an arbitration award fixing the price of the land cannot be executed like a decree for specific performance of sale agreement, when the reference to arbitrator was only for determining the compensation under the sale agreement.A bench of Justices Uday Umesh Lalit...

Applying the principle that an executing Court cannot travel beyond the relief granted in a decree, the Supreme Court held that an arbitration award fixing the price of the land cannot be executed like a decree for specific performance of sale agreement, when the reference to arbitrator was only for determining the compensation under the sale agreement.

A bench of Justices Uday Umesh Lalit & Vineet Saran further observed that for an award or instrument creating any right, title or interest in immovable property, it would be required to be compulsorily registered under the Registration Act and that the same, having not been registered, could not be executable.

"Although, in the present case, the Award did not relate to right, title or interest in an immovable property and was only for determination of the price of land, yet if the execution court was to treat the same for execution of sale deed of land (immovable property), it ought to have considered the impact of non registration of such Award, which has not been done in the present case"

The top court answered the question "whether an Arbitration Award, which determined the compensation amount for the land to be paid under agreement for sale, can be directed to be executed as a suit for specific performance of agreement, when the reference to the Arbitrator (as per the agreement) was only for fixation of price of land in question, and the Arbitration Award was also only with regard to the same".

The Court answered the question in the negative.

Appellant 1 being a partnership firm and other partners being its partners, is owner of Approximately 100 acres of land (249 bighas).

The dispute arose four decades back, wherein the said land was subject of acquisition for which a notification dated 13.03.1973 under Section 4 was issued under Rajasthan Land Acquisition Act, 1953 (Act of 1953), which was for benefit of the Respondent-Industry. The acquisition notice was challenged by the appellant in Rajasthan High Court and was dismissed. Subsequently, a division bench appeal was filed before the HC and the during its pendency, a "declaration" under section 6 of the Act of 1953 was issued by the State of Rajasthan on 13.09.1975. The HC quashed the acquisition proceedings.

Following this, the Respondent as well as the State of Rajhasthan filed special leave petitions which were dismissed in 1994.

Notably, during the pendency of the aforementioned SLPs, an agreement was arrived at between the parties in the instant case (and the State of Rajasthan) which was to the effect that out of 249 bighas of land, 104 would be retained by the appellant and the remaining (145 bighas) would be "sold" to the Respondent, subject to the fixation of price of land, construction etc. to be finalised through Arbitration.

The Arbitrator Justice Chandra Bhan Bhargav decided the compensation payable for by the Respondent to the tune of Rs. 12,18,700/- and passed an Award, which was subsequently accepted by Respondent and Appellant and filed before the Additional DJ.

The Appellant then filed its objections to the Award before the DJ, which were allowed and the matter was sent back to the Sole Arbitrator.

The Respondent challenged the Order of DJ before the Rajasthan HC, which was allowed and the HC reaffirmed the order of Sole Arbitrator in the first instance (dated 09.06.1985).

The Appellant challenged the affirmation before the Supreme Court vide appeal and it was dismissed, whereupon the Award attained finality.

The ADJ, allowed the Execution application, which was challenged by the Appellants in the Rajasthan HC vide Civil Revison and subsequently the Respondent filed a suit for specific performance, which was withdrawn thereafter, while the subsistence of Civil Revision Petition (of Appellant) continued.

Rajasthan HC dismissed the Civil Revision petition of the Appellants and also noted that Respondent's withdrawal of the suit for specific performance woild not amount to admission by the respondent Company that the Award and subsequent order based on it, were not suitable and enforceable.

Aggrieved, the Appellant(s) were in Appeal in the present case.

What the Court held:

The Court allowed the Appellant(s) appeal and held that the quashed the impugned Judgement of Rajasthan High Court.

The bench noted that the Award of the Arbitrator in the present case was not a conclusive contract between the parties which could be executed. The Court noted that a right would only have accrued to the Respondent to purchase the land at the fixed land price, could the Agreement which had been executed between parties been enforced at the behest of Respondent.

In light of this, the bench noted,

"Going behind the decree for doing complete justice would not mean that the entire nature of the case could be changed, and what was not awarded in favour of the respondent, could be granted by the executing court. It was only after the respondent had exercised its right to purchase the land at the price fixed by the Arbitrator that a right to enforce the Agreement could have arisen in favour of the respondent. The Award of the Arbitrator, in the present case, in itself was not a conclusive contract between the parties, which could be executed"

Furthermore, it was held that since neither the Agreement ((dated 1.02.1980) nor the Award (dated 09.06.1985) had  been registered and that the impact of non-registration would result in non-execution of such Award.